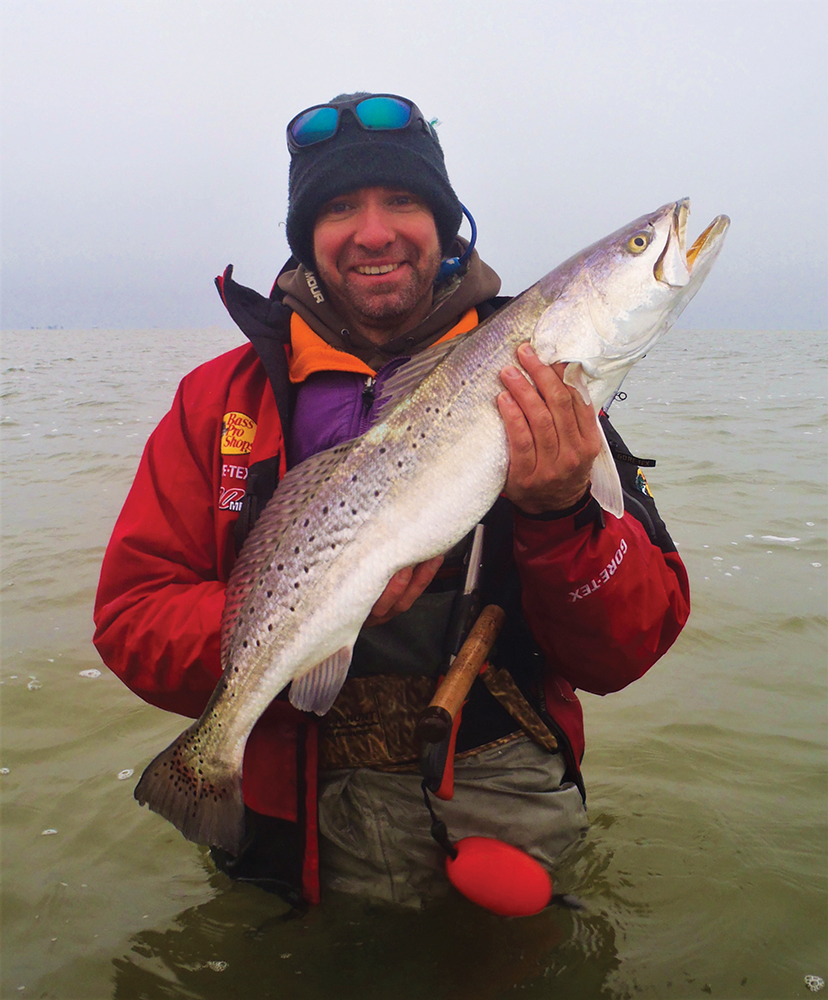 On the same day Kev caught the 10 shown in the other picture shown here, Jeremy Rhodes caught his first trout ever on a Fat Boy, a 29-incher, then landed this 30 a short time later, using the same lure.

In the coldest season, many days on the water start and end much the same way, when chilly weather and water temperatures demand a predictable lure-choice strategy. On average, fishing in Jack Frost's months means starting with soft plastics and dragging them low in the water column, maintaining regular contact with the bottom, switching “up” to slow-sinking twitchbaits only when bites come easily, temperatures climb and/or signs indicate fish activity at or near the water's surface. Obviously, this truth applies more regularly in colder winters than in warmer ones.

Certainly, when water temperatures descend below 55° or so, this mantra makes more sense than some other strategy. When I find myself fishing in such raw conditions, I fall right into the standard game plan, one which has produced big trout for me many times. Of course, on two different days, a water temperature of X degrees can lead one to completely different conclusions about which type of lure should produce more bites than others, since no day exists in a vacuum; all weather occurs on a continuum, as part of a cycle.

If an angler fishes on a day when a warming trend has brought water temperatures back up to 50°, after a strong front sent them plummeting down to the mid-40s for a day or two, the scenario differs significantly from one in which the effort occurs right when a harsh front drives water temps down to a low of 50°. In the first situation, in response to the warming trend, trout might be more willing to rise off the bottom to take a swipe at a lure than in the second one, which happens during the rock-bottom low.

In addition to recent weather trends, time of year also affects the activity level of the fish in relatively cold water. The aggressiveness of trout in cold water increases in the second half of winter, since they become more acclimated to low temperatures over time. Consequently, a 55° water temperature occurring during a warming trend in February does not affect decisions about lure-choice in the same way the same temperature will at the end of a cold snap in December. When considering how a specific temperature likely affects the feeding mood of fish, one must consider the context in which the number exists, in addition to the raw number itself. While acknowledging this, I still base many lure-choice decisions on benchmark temperatures.

When working in water colder than 50°, I don't spend much time throwing slow-sinking twitchbaits, preferring soft plastics on light jigheads almost exclusively. At the other end of the spectrum, unless the water warms up to 60° or more, I won't spend much time experimenting with topwaters. These two rules simplify things and enhance productivity for me. The trickier situations occur on days when water temps lie between 50 and 60°, especially when prevailing temperatures send them climbing. On these days, slow-sinking twitchbaits work well on a regular basis, but the other two types of lures can produce better in some situations.

The assertions I make here assume two basic things about the angling efforts to which they apply. One relates to the choice about whether to wade or fish from the boat. Generally, drifting anglers fish in deeper water than those who wade. This changes some aspects of the decisions about lure-choice. While it's certainly possible to catch fish on twitchbaits while fishing out of the boat in depths of five to six feet or more, especially when one deploys a fast-sinking lure like a 51 or 52M MirrOlure while pointing the rodtip down at the water, soft plastics produce more strikes in this situation than other lures. Heavier jigheads often facilitate a higher bite rate for drifters too.

I do almost all my fishing by wading, and I'm tempted to remove the word “almost” from the previous statement. Wading anglers, fishing in water ranging from two to about four feet deep, generally find lighter jigheads more productive, and they usually have a better chance to catch fish on slow-sinking twitchbaits, which can prove exceedingly difficult to present at the proper depth from a moving platform, in water of greater depths.

In addition to depth of water, I also assume something about the specific fish targeted when drawing conclusions about what lure will work best at various temperatures. I try to catch the biggest trout possible most of the time, especially when fishing during the colder half of the year, so I normally prefer throwing plugs which resemble small fish instead of those which mimic shrimp, because bigger trout eat more finfish than crustaceans. This truth becomes more important in months when the variety of food available to the predators reaches its lowest point. Bigger trout become intently focused on taking mullet and smaller trout during the winter months.

Results on trips made in the days and weeks prior to typing this piece remind me of other factors which add complexity to this puzzle. While we experienced a slow, steady bite on slow-sinking twitchbaits on a recent trip, my clients and I caught about 15 trout between 20 and 26 inches, with only half that many between 15 and 19, and no undersized ones at all.  Meanwhile, we watched a boat full of drifting anglers and a pair of waders nearby catching dinks at a much faster clip, using live shrimp, but they brought nearly no keepers to hand.  Those facts reinforced the way the dietary habits of the bigger trout complicate the lure-choice puzzle, in some situations.

When big trout become “negative” enough, stunned by low and/or declining water temperatures, they won't rise far from the bottom or move laterally over much distance to strike at a lure passing over their heads. They tend to sit on the bottom with their heads and eyes cast downward. In such a situation, dragging a soft plastic close in front of their noses provides the only chance to urge them to take a bite.

But, in many other situations, either in low/stable water temperatures, or low/rising water temperatures, and for brief periods during which they become slightly more active in pursuit of food, like the rising or setting of a strong moon, a sweet turn in the tide, or a subtle change in the weather, larger trout prefer to take a lure which mimics a fish more than one that looks like a shrimp.

Consequently, I constantly remind myself to continue trying slow-sinking twitchbaits when water temperatures range from about 50 to 55°, even when I don't see ample signs of life at or near the surface. Mostly, I prefer sinking Paul Brown Fat Boys, especially in clear to nearly-clear water and relatively calm conditions. When I find myself standing in murky water, where I can't see the grassbeds on the bottom in depths of two feet, I usually switch to a louder lure with brighter flash, like a Catch 5 or Catch 2000. The clicking sounds and reflected light help the trout locate them, especially on sunny days.

If winds crank up to around 20 knots and increase turbidity, and I spend time casting in water resembling gray paint, I normally switch to an Original Paul Brown Lure, bending the tail sharply downward, so the lure will spin when I retrieve it; the circling action helps the lure stay “down” in the water column. In strong winds and high waves, most other slow-sinking twitchbaits rise to the surface and glide, despite all efforts to keep them from doing so.

In most situations from December through March, when water temps range from 50 to 60°, I throw a Fat Boy or Catch 5, using steady, rhythmic twitches to create side to side movement of the head of the lure, then pausing the twitching to either reel the lure slowly toward me, or let it sink briefly in place. In warmer water, over about 55°, I increase the speed and intensity of the twitching, and keep the lure moving almost constantly. In colder water, I tone down all aspects of the presentation, allowing the lure to sink slowly in place for longer periods of time.

When water temperatures rise (as they inevitably will) I increase the intensity of the aspects of the presentation even more, incorporating speed bursts after pauses, executing these bursts by holding the rodtip steady and making three or four fast cranks with the reel handle. This results in the lure darting a few feet forward, often triggering trailing fish to strike. In these same warmer water temperatures, I also sometimes replace the twitchbait with a floating plug like a One Knocker or Skitter Walk.

In water temperatures at or above 60°, topwater lures work better on average than they do in colder water. I'm well aware they will work in water of 50-something degrees, even under 50°, on some special occasions, usually during a warming trend after really harsh weather breaks, but most of the time, deploying floating plugs in cold water reduces productivity, compared to what's possible with slow-sinking twitchbaits or soft plastics.

Two types of scenarios increase the odds for catching big trout on topwaters during winter, both ironically involving relatively windy conditions. The old stereotype about calm conditions enhancing the potential for a vigorous topwater bite don't apply when a front blows across the coast, or when strong onshore winds accompany rising temperatures and tides at the end of several relatively warm days. Most of my best winter topwater sessions occurred in one of those situations or the other.

Even in crystal clear water and under bright skies, big trout often strike topwaters with reckless abandon during the hour or so just prior to, during, and soon after a frontal passage, while north winds whistle. Similarly, they regularly rise and blow up under bright skies when balmy south winds churn the bays, creating background noise and/or turbidity in the water. I always remain ready to deploy floating plugs when formulating my winter strategies, for those reasons.

On most winter days, I start with a worm and work my way up, only if bites come easy and I see signs indicating fish moving around actively. I use the benchmarks described above to make decisions about when to experiment with different types of lures, always assuming a big trout wants to eat a big meal, if possible. Additionally, I consider recent trends in weather to draw conclusions about the specific effects prevailing temperatures will likely exert on the situation.