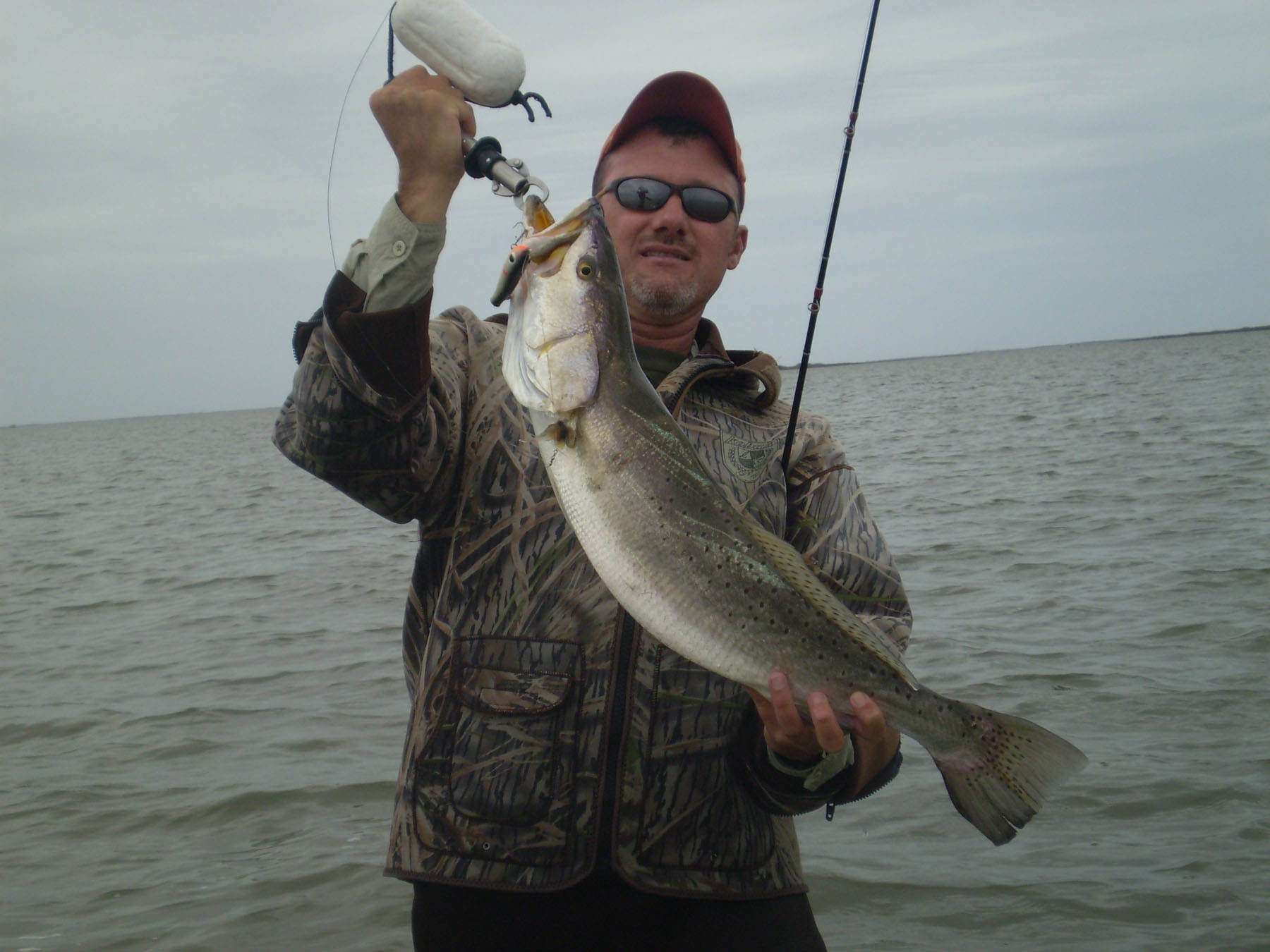 The natural appearance and enticing wobble of a pearl/black fl oating Fat Boy created an impression this nine and a half pound trout could not resist.

A poignant trip around Thanksgiving last year reinforced the legitimacy of a plan I often use for choosing lures in cold water. Just prior to that day, water temperatures had plunged more than twenty degrees, into the mid-fifties.

I started off by searching for fish where I "wanted them to be", on shallow flats next to the King Ranch Shoreline, driving slowly along and scanning several miles of barren looking water, spotting scarce bait activity, but plenty of brown algae. Knowing that trout in the Upper Laguna Madre sometimes behave like mercury in a thermometer and drop into the depths of the Intracoastal Waterway when temperatures plummet, I pointed the bow of my Haynie eastward, to check out some of the smaller channels intersecting the main ditch.

On the way, I noted a substantial improvement in water clarity. When I got within a quarter of a mile of the ICW, I could see mullet jumping regularly along the dropoffs.

Having looked over so much ugly, lifeless water on the other side of the bay, I knew this likely meant the trout would be found among all the bait. I put the Power Pole down near a shallow ledge, jumped out and began casting across a channel, to where grass beds created a transition between firm bottom and the silted depths along an old oil-field gut.

My first lure of choice was an Exude RT Slug, rigged on an eighth ounce jighead. After only a few fruitless casts, I began to get bites steadily and catch trout, some solid keepers, others an inch or two under the line. The key was to drop the worm close to the grassy lip and flutter it slowly off the edge, then work it with short hops close to the soft bottom at the base of the ledge.

The fish seemed to be lying low, probably still shocked from the recent change in weather and water temperature. I caught nine or ten trout at that spot by snuggling my worm up to points and pockets formed by the contour line. I was catching fish steadily, getting a bite for every four or five casts, but since they weren't the size I was looking for, I decided to move to a stretch of channel where deep water shoots straight out of the ICW and ends abruptly at a grass-bearded sand bar.

Approaching that spot, I saw lots of leaping mullet and knew I would probably catch trout easily before the first cast was made. Once I waded into position and began working the spot, I proved what I'd suspected, catching about a half dozen trout in maybe ten casts. Given the ease with which the bites were coming, I decided to switch lures and see if bigger trout might want something more closely resembling another fish.

I tied on a Swim'n Image and began flinging it toward the same edge along which I'd coaxed the other bites. I'd crank it down below the surface for a couple of feet, then twitch my rod vigorously and rhythmically, allowing the lifelike shad wannabe to float up intermittently, turning the reel handle super slowly, as I might when reeling up slack while walking the dog with a topwater. The bites on it came soon and nearly as frequently as had the ones on the worm. In maybe an hour, I hooked about twelve fish, landing most of them, the biggest stretching to about twenty inches.

When the fishing began to seem easy on the crankbait, I made another conscious decision to switch lures, tying on a pink Corky, which would run a bit shallower than the floater/diver. Soon after I began casting along the same edges, walking the dog a few inches under the surface with the finger mullet lookalike, I felt plenty of the "doinks," thumps, ticks and taps trout make when they take a bite.

I caught a couple of four pound specks on the soft, rattling lure, then an eight pound redfish. With the warming of the day, the size of the fish was improving, and I was having a sweet old time indeed. My attitude was enhanced further when I pulled an eight pound trout from the fringe of grass bordering the hole at the very end of the channel.

Realizing that I was in the midst of something potentially special, I changed lures once again, hoping to repeat the pattern of improved catching that had accompanied each prior switch. I had some new Rapala XRap SubWalks I wanted to try, figuring they'd work that day if they were going to work at all.

I tied on a clown-colored version of the plug, pitched it out and immediately realized I could make its head jump side to side under water with only minimal effort, much like the Corky. Though the bright coloration seemed wrong for the clear water, I caught a couple of quality trout on the pinging plug right away. On maybe the fifth cast, I felt one of those unmistakable, resonant thumps that big fish sometimes make. When I lifted my rodtip and the line came tight, the fish didn't move at all; from the weight, I knew I had hooked something significant, either another upper-slot or oversized red, or better yet, a trout of epic proportions.

Eventually, the fish surrendered to my tugging and came bursting through the surface. The head that emerged in a shroud of white foam seemed to span eight inches or more, dark like that of a great trout, but the hook pulled out before I could truly determine if I'd located a monster of the kind I was hunting for. I did catch several more solid trout in the twenty to twenty three inch range on the XRap after that.

Then, in the silence of a windless evening, with the sun dipping low and a gray glare forming on the glass-smooth shallows of the Lagoon, I switched lures again. Because I could see fish making wakes in the shallows adjacent to the channel, I wanted a stealthy lure I could work slowly over the grass blanketing the bottom out there. Choosing a floating Corky Fat Boy, pearl/black, I quickly proved it was the right tool for the time.

In the gloaming, cruising trout swam up behind the slow-wobbling Fat Boy and plucked it from the surface, not really blowing up, just slurping it under and turning away. I perceived these takes as a fitting end to a memorable day; they were the extra cheese I sprinkled on the supreme pizza I'd metaphorically baked. Laughing out loud with amusement, I kept catching trout until all glimmers of light left the west.

On the day, I caught nearly fifty fish, including an eight pound trout. Though the big one got away, I really didn't care, given the ones that stuck and came to hand. Perhaps more importantly, I'd verified the relevance and effectiveness of a progression in lure changes that I often use in cold waters.

With water temperatures in the fifties, I usually start the day fishing with a worm. Doing so gives me the highest confidence that I can make lethargic fish take the bait while they are relatively inactive. If the bites come easily, I will make a move to other lures, sometimes using the crankbait as a kind of bridge between the worm and the Corky.

Once I decide that fish are more active, either because I see more bait or more movement in the bait, or because I become bored with the ease of catching fish on the crankbait, I'll make the switch over to a sinking Corky or Fat Boy. Later, given a further upgrade in the activity level of the bait and an even easier bite, I will make the leap all the way up to either floating Corkies or conventional topwaters, choosing lighter, quieter ones in calm, clear water and heavier, noisier ones in choppy and/or off-colored water.

The use of this progressive change in lure types is based on the idea that in cold water, fish will be lethargic in the morning chill and their aggressiveness will improve throughout the day as the sun warms them up. The more active the fish, the higher in the water column the lure will be worked; that's how the theory goes.

It's opposite in the summer, when the water is hot. That time of year, I am much more inclined to start off the day with a topwater, when light levels and temperatures are at their lowest. I will switch over during the day, sometimes working my way through the crankbaits and Corkies, but more often moving straight down to the worm when the blow ups fizzle and stop.

The idea during the hot season is that fish are most aggressive in lower light, so the progression of lure choices is inverted. Also, it seems to me that less aggressive fish in warm water are not easily triggered by slow presentations, so I prefer the worms and crankbaits over Corkies, since they can be worked faster at greater depths. In the transitional seasons of spring and fall, the progression is more radically altered.

Normally, in moderate water temperatures associated with the mild seasons, I fish topwaters and Corkies almost exclusively. Big trout seem to stay in relatively shallow water most of the time in those months, and I feel most confident in tricking them with plugs that imitate other fish. I will employ all kinds of lures within these families depending on the conditions, using everything from floating Corky Jrs. and Spit'n Images to jumbo topwaters. For the most part, the worms stay in the boat to wait for the return of more extreme water temperatures before coming back into play.

None of these ideas are etched in stone, of course. I have caught big trout in every season on every kind of lure I place in my repertoire and won't hesitate to experiment with things that defy the rules of progression I've set forth here. I break the rules most often because of information I've gotten on the previous day.

If I catch trout one morning on topwaters in fifty seven degree water, after quickly working my way up to them, I'll likely start the next day on top, rather than run through the drill again. That's one of the advantages of being on the water regularly. It sometimes helps one recognize those occasions when normal drills aren't necessary.

But there is no substitute for a well-developed plan of action when venturing out on a trip for the first time in several days or weeks. Working through the progression of lures from bottom to top or vice versa is one such proven plan. In general, more aggressive fish are easier to catch higher in the water column on faster presentations than are less aggressive fish. Working the progression helps one keep productive lures in the paths of feeding fish more of the time.