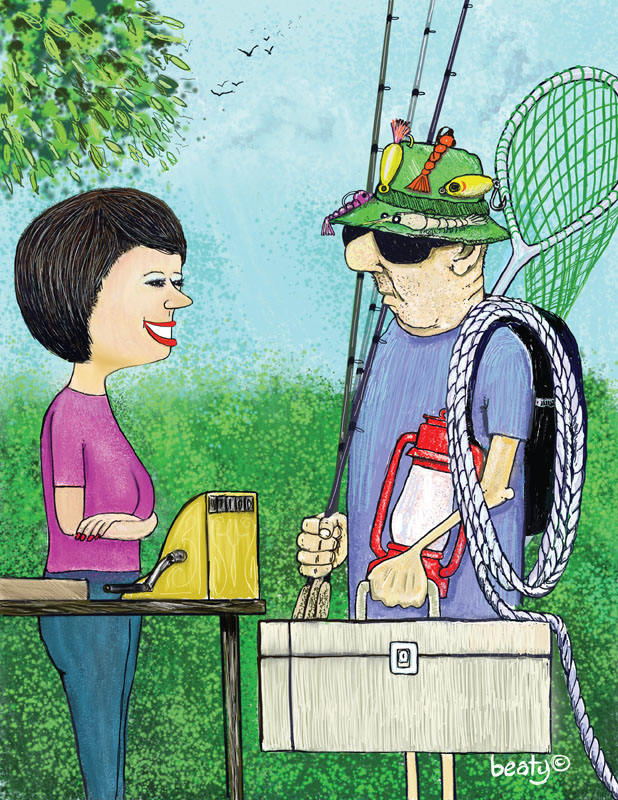 "I'm having a garage sale," my wife said. I haven't slept much since she told me that. I can't.

I have to wait until she's asleep so I can slip into the living room and dig through the mountains of clothes, kitchen items, old lamps, shoes, purses, toys and furniture looking for anything valuable that belongs to me. Oh sure, she asked me what I wanted to sell and I gave her my standard, "Nothing." But as much as I trust her, I know her all too well and I'm certain that garage sales are nothing more than a front for wives to get rid of the treasures that husbands collect over the years.

I remember one garage sale a few years back that she had on the opening day of deer season! That's almost criminal if you ask me. I was up late every night for a week going through her assorted sundry items looking for anything that might belong to me and I was so tired on opening day that I fell asleep in my deer stand. When I awoke there were deer everywhere and I just got a glimpse of a good buck slipping into the brush about 25 yards from where I sat, no doubt disturbed by my snoring.

Garage sales are evil things. It takes years to accumulate a good collection of "stuff" and then here comes your wife with a Sharpie and some little stick-on glow-in-the-dark price tags and life, as man knows it, changes.

For example there was the Lew's Speed Stick that was missing three or four ceramic inserts from the line guides but was otherwise in good condition. My wife priced that rod at a dollar; yes that's right, a dollar, in one of her garage sales about 25 years ago. I mean talk about criminal! I rescued the rod and locked it in my closet and it's still there today, safe and sound but still missing the ceramic inserts, but hey, at least I still have it and I'll get around to fixing it one of these days and sell it to one of my bass fishing friends for ten or fifteen bucks.

Or how about my antique hook collection I had meticulously collected? I took all of the old rusty hooks and even the nice hooks off of my Hump Lures so I could frame them about 20 years ago. I put those hooks and the hooks off of about 200 older Hump's in a box in my office. She sold them! Yep, you heard me right; she sold those old hooks for a couple of bucks! I can't believe that anyone would sell such valuable old stuff like that.

Then there's the trolling motor that I never saw again after one of her garage sales. It was missing the prop and the plug was corroded, but it was almost an antique and it just mysteriously vanished. What about the two aluminum props that I had stashed? Both were for an old 40-horse Johnson and were in pretty decent shape with just a few oyster dings. Gone. Vanished. Lost forever to some garage sale vagabond.

Then there was my Coleman lantern parts box. I had parts from lanterns that went back to the 40s in that box. Old generators, pump assemblies, slightly burned silk mantels, fuel caps, you name it. She sold that to some guy at her last garage sale and a week later I see all of these rare lantern parts for sale on EBay. Made me want to cry.

What about my spare trailer wheels and tires? I had seven of them and now I'm down to only two. Oh, sure, some of the tires wouldn't hold air and some had worn tread, some had a little rust, but where'd they go? They're not at my house, that's for sure.

I used to have a collection of stringers that would make most die-hard wade fishermen weep. I'm talking about the good ones, 30 feet long and made of plastic-coated aircraft cable with nice floats–gone. Gone too are the dozens of shorter coated cable and nylon rope stringers. Wonder where they got off to?

Vanished along with the stringers are the dozens of old gill-net floats that I'd stashed in the same box and four or five stingray barbs in a pint mayonnaise jar. What about my tackle boxes that you couldn't pick up because the latches were broken but made dandy "stuff" boxes? I mean, come on, this is some valuable stuff!

I'm telling you that garage sales are nothing less than a plot by women to relieve a man of some his worldly treasures and create empty space in our closets and garages that will make things look, well, empty.

I was just informed that a three family garage sale is going to take place at my home very soon. I know the families and I feel sorry for the husbands as they have, or had, some pretty good stuff of their own.

I've ranted and I've raved, but to no avail. The garage sale will happen, there's nothing I can do to stop it, (three women already told me so), and I'm going to be in a bow blind when the solemn conclave takes place.

If I knew what is going to be gone when I get home, I'd hide it, but there's just too much to rescue.

Hey, at least I saved that Lew's Speed Stick! That has to count for something.