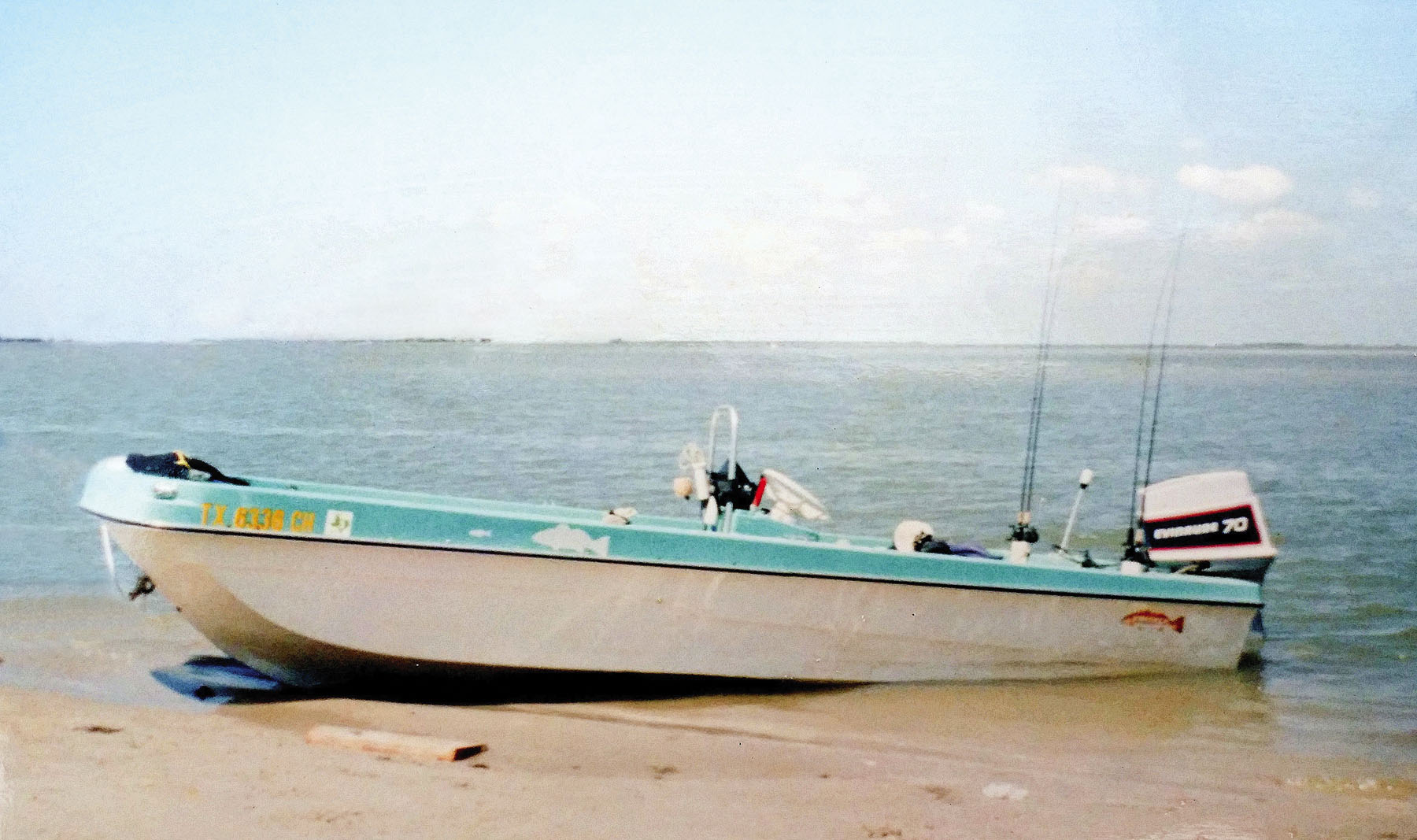 “We ain’t gonna worry about a few cracks and road rashes.”
"Brandon! Y'all get walking and try to find that darned license plate–it has to be back there somewhere."

The DPS Officers weren't hardly amused and we were all dazed and confused from what had just happened. It was the beginning of the end for our beloved and infamous Green Bathtub. The story though is actually more about how some of us learn things the hard way, so hopefully others won't have to.

It had been one of those seemingly perfectly scripted days, where everything that could have been perfectwas. And that should have been an omen!

I had Brandon, my nine year old and young nephew, Shawn, in tow. It was right from the lyrics of that incredible song many of us listened to every morning on Bob Stephenson's radio show, Across the Bridge to Paradise by Donnie Z.

We were indeed across that bridge. An easy four-tide day pushed and pulled rafts of mullet across crystal-clear sandbars like the sushi buffet they were. Line stripping surf-run trout and reds were throwing them up in the air all day long and you could see them cruising in little wolf packs. They were aggressive suckers for the best lure of the era, the famous bone-colored Jumpin' Minnow; having shed its black and chrome.

We whooped and hollered with every crash of whitewater and I experienced my first two-fish-on-a-topwater. A 24" trout on the front hook and a 23" red on the back.

We ended the day sunburned, exhausted, and totally filled with another of life's great adventures. We had launched the boat off the beach, into a then-existing deep gut just under the San Luis Pass Bridge. An ancient tri-hull built down in Alice, called a Bay Rider, and then barely managed to drag it back out with our little Chevy LUV pickup.

More than once we had to sacrifice a stringer to rope-start that old 70-horse Evinrude. And if the tilt and trim worked, it was probably because somebody was sparking wires "Blue for sky, green for grass. I've told you a hundred times dammit, now hurry before we crash that next bar!" Never mind the four six-gallon gas tanks, clamp-on nav lights, or the kidney belts and football mouthpieces needed to endure its ride; it was ours and it took us across that bridge.

A few DQ hot-fudge sundaes later, we were chugging back north on I-45, the little LUV protesting every precious mile gained. Out of nowhere a dump truck towing another truck appeared from the feeder and neither the LUV nor I could react in time. With smoking brakes we rear-ended it and the impact was enough to launch the Green Bathtub, again.

It flew slow motion over the cab like something out of a B-Grade UFO flick, creasing the top of the cab enough to put my chin on the steering wheel. In the rearview I watched it doing 360s on the asphalt, then a couple more as it slid to a dusty halt on the shoulder. The dump truck kept going, totally unaware of our life-changing event. We eventually managed to load it back on the trailer, larger shards of fiberglass and other debris we could recover in the truck bed. The license plate wasn't one of them, but the troopers figured we'd had enough and let us go.

OK boys, we ain't gonna worry about a few cracks and some road rash. We'll just fix it with a little resin and foam. It'll be good enough to get us back across that bridge.

Well, the fiberglass part went well enough, so then it was time to "expand" our no-budget project of love.

I did as much research as I could, back then it was at the library. I think I was the only one in there with "coon" eyes. Two-part expanding foam was the obvious answer.
I lucked into a couple gallons of "high-quality high-density" foam from a guy at work that had been sitting in his garage for years. Enough remained of the labels to determine which can held Part A and Part B, and I winged it from there.

As suggested, I jacked the bow to a high angle and drilled 2" relief vents at perfectly measured intervals. The idea was to make calculated and controlled pours from low to high, going from hole to hole as the product eased to the next vent. I strutted a "Hey I got this" attitude; already thinking about the next song-worthy trip.

After stirring vigorously I made the first pour. Nothing happenedand then nothing still happened. "Well just flip, this stuff is probably just too old and isn't going to expand," I thought.

OK then... We'll just pour a little more. And nothing happened again.

My throw-down adopted step-brother showed up, and after scratching heads "Well heck, let's just pour a little more and see if this stuff will finally kick."

After a few more head scratches we heard the first ominous rumble. A little turtle head poked out of the sixth hole up.

As I stared at this brown apparition it suddenly and rudely burped at me. Little dots of foam peppered my face, bare chest and forearms. My chest really wasn't that bare as my DNA origin is evidently a much colder clime.

Then came a louder, more guttural rumble from deep within the bowels of the hull. I jumped back and was horrified to see all of those little foam dots turning into hair-clinging caterpillars. There was a big one on my moustache trying to plug my left nostril. Another turtle peeked out of the second hole.

It wasn't long before those rumbling sounds became more akin to screeching, compressed-air escaping whooshes. Nuclear-class mushrooms were erupting from not only the vent holes but every tiny breach in the deck, even the little screw holes where the ice chest had been.

Panic ensued with this rapidly expanding monster so I jumped in with a flat shovel trying to kill the beast flush with the vent holes. As soon as I cut one tentacle down there came another, and some of them were now three feet of waving arms looking for anything to lock on to. My left foot was attacked and promptly glued to the deck. When I reached back to free myself another big caterpillar glued my belly button to my bent-over belly. Now I was stuck in a compromising position while the monster kept growing.

There was no choice but to rip skin in desperate escape, and I fell backwards. Now my butt is glued down with mushrooming tentacles threatening the nether regions. I screamed, ripped britches, and managed to abandon ship; desperately trying to suck oxygen through my remaining nostril.

While lying on the driveway I noticed the bottom of the hull near the transom bulging suddenly downward and, growing. I tried to hold the deformity up with my hands, but since the reaction is highly exothermic, I promptly burned off all my fingerprints.

I rolled over and ripped off another large caterpillar between my back and the concrete, grabbed a floor jack and some plywood, and tried to stay this rapidly expanding protrusion. The boat wasn't heavy enough to counteract the force of the jack against the bulge, so as the tires left the driveway, the trailer tongue fell with a bone-crunching crash. The remaining un-reacted foam then rushed forward and started its own version of a prominent nose job. Oh, the horror!

To summarize all of this; yes, I survived, but I looked like I had mange for several weeks from removing much foam from much hairy skin, and for the first time in decades I had to grow a moustache back. The Green Bathtub survived too, and yes, we got across that bridge again. However, there was such a gynormous rocker in the hull that any speed above slow-plane would make it porpoise uncontrollably. It also took Popeye to keep it on a straight course, the strong lean-left tendency was near impossible to overcome with the old cable-and-pulley steering system.

Pulling a boat with an undersized tow-vehicle is sorta like driving a 16-penny nail with a tack hammer. You have to hit it real hard and you just can't stop.

Also, those cute little nylon transom tie-down straps ain't gonna hold if you rear-end a dump truck, but those safety chains are critical.

Most importantly (and hardest for us males), is to go ahead and read those darn directions, even if the label is a little rusty. I totally missed the part about the foam being enough for twenty small craft repairs.

Ahh; the joys of boat ownership, but its part of the whole experience... agree?

See y'all across that bridge to paradise. One way or another.