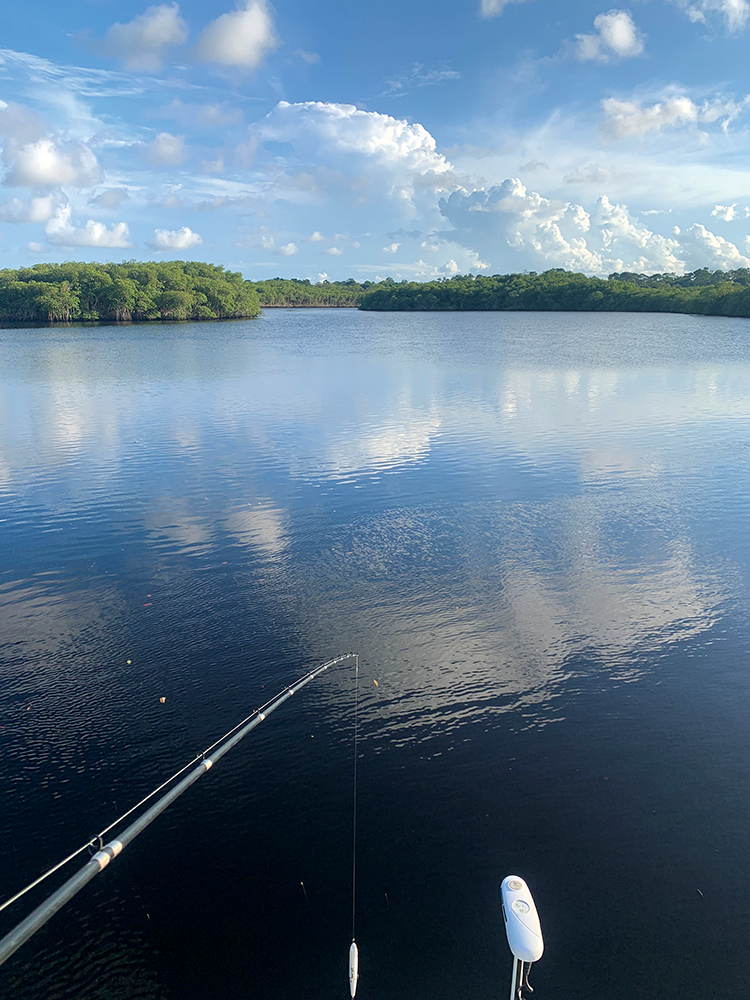 Sitting to write this article, I am at the edge of the beachfront in Key Largo, enjoying a cold drink and a beautiful sunset. My best friend and his soon to be wife decided they wanted to have their wedding down here, so I figured why not make a fishing trip of it. Originally, I planned on staying down here for the full time but at the last minute my brother decided he wanted to join.

I was appreciative of the company and the fishing possibilities during the trip were beginning to grow. He told me that he has never caught a snook and was excited to check the species off his list. Fortunately, I have learned several great places where we might be able to make it happen from past Snooktopia adventures. So that being said, the first part of our trip was going to be a stop on the Loxahatchee River to see if we could accomplish getting him on a snook!

Loading up nearly every piece of fishing gear we own, my brother and I were finally headed for south Florida. Fortunately for us, my buddies had been down for Snooktopia the week prior to us heading down there and they already had some patterns figured out. I called one of my buddies and he explained exactly where the mullet were congregated and we might be able to take advantage. This was definitely a huge help and saved us a lot of leg work.

After driving all night and a thousand miles, we arrived to Jupiter and were eager to get on the water. We launched the boat and went to the area Donald had described as a great place to catch bait. Blaze and I made a short wade and with only one toss of the castnet had enough mullet for a full night of fishing. With the livewell full of frisky baits we wasted no time heading to the inlet and getting set up for an early start.

What we were about to witness next was more than worth the long drive. We sat and watched tarpon in the 100-pound class rolling and jumping as they busted the plentiful pods of mullet. Something we normally only get to see in photos and TV fishing shows was playing out in real time right in front of us. Awesome was the only word I could use to describe it as those tarpon put on a show we will never forget.

As the sun was beginning to set we started to get a few bites, mostly gafftop catfish and small jack crevalle, but any bite is better than nothing. I was trying to explain to my brother how powerful large snook can be and how they fight. But, like my first time, I wasn’t sure he believed all that I was telling him.

As the sun disappeared below the horizon I switched the boat’s running lights on and Blaze’s reel began to scream. She came up as he set the hook and we caught glimpses of her headshakes in the growing darkness of the inlet. We both knew it was a good fish instantly, and that the fight was just getting started. She took off directly to the middle of the inlet and before we realized it, he was nearly spooled. Unfortunately, and as many big fish stories end, she pulled loose and swam away. I could do nothing but laugh because my brother shared the same baffled look as I did on my first large snook. It doesn’t take but a few seconds to realize these aren’t the kind of fish we catch at home; there’s absolutely nothing “normal” about them.

Not too long after my brother got another bite and by the way it was acting we knew that it had to be another snook. After a respectable fight Blaze had his first snook in hand. A healthy 30-incher. The rest of the night proved rather uneventful but at least we knew where they were.

We took our time the next morning moseying around getting our tackle in order and then dropped by a local café for lunch. As always, we headed out in search for bait in late-afternoon, and like the day before it came just as easily. Luckily, Blaze also caught six nice sand perch in the castnet and I was instantly excited, having learned on prior trips to the area that sand perch are one of the finest baits for big snook. We anchored in the same spot just before dark and I grabbed the biggest sand perch in the livewell, chunked it out the back of the boat, and settled in to wait for a snook to take it. My brother had his doubts because it was such a big bait but I assured him that it would work.

After an hour or so of soaking that perch, out of nowhere my reel began to peel line at a frightening rate. Aware of the size of the bait, I waited a few extra seconds before setting the hook. When the line came tight I could tell it was a huge snook. Sadly though, the fish took off and never slowed, even with a very tight drag setting. I did all that I could to turn her but the fight ended as she made her way to the nearest pier piling and broke the line. Blaze no longer doubted that a large sand perch is primo bait for catching trophy snook.

I retied and shook my head in disbelief, but I fully understand that this is exactly how it goes sometimes. We continued fishing and Blaze got another good run but the fish spit the bait before getting a hookset. We fished well past midnight before calling it and heading back to the house.

After it was all said and done, we didn’t completely hammer the snook but we had our opportunities. I fully believe that the main reason for traveling to certain locations in hopes of catching a trophy fish is all about opportunity. It’s the reason why you fish Baffin Bay for 30-inch trout and the Bahamas for 10-pound bonefish, or drive all the way to Jupiter for a 40-inch snook. You do it because this is where the best opportunity lies to catch a trophy.

My brother and I fully understood that, and we hadn’t come up emptyhanded either. We had a great time together and I was able to show him a piece of Florida that I have come to love. As I previously mentioned, we are now in the Keys and we have a lot more water to explore. This area is completely new to both of us and we really aren’t sure where to start. However, that is at least half the fun and greatest part of the adventure. We have a lot of exploring and fishing ahead of us, and hopefully another adventure story for a future issue.