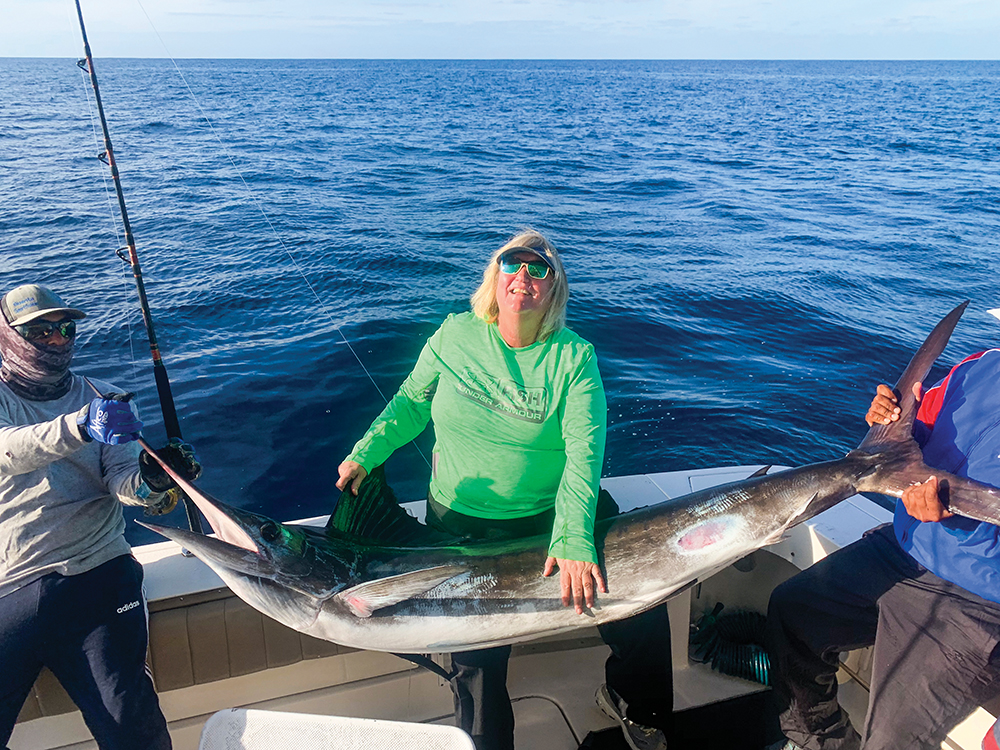 Mom with her striped marlin.

I know that traveling in the past year has been more than difficult, but some communities have found a way to safely accommodate traveling guests. I, for one, have truly missed getting on a plane and flying to a location where I can experience a different culture of people and, of course, trying to catch a few fish. Here recently, my family and I decided we were all going to take a trip down to Cabo San Lucas for a few days and do exactly that.

As far as me and my parents, it was going to be our first trip to the area but we were accompanied by my brother and his girlfriend who have been there several times. My family decided to head down a few days early and I was going to meet up with them midweek. After a short 2.5 hour flight, I arrived in Mexico and caught a taxi down to the peninsula. Once I met up with the family, I decided I was past due for a few tacos and something cold to drink.

Later that evening we sat down and decided what our plans were going to be for the next few days. We all agreed that we should spend at least one day fishing as a family. The next morning, my brother and I made a short walk down to the marina and found one of the guys he has used for fishing in the past. He showed us a 35’ boat and there was plenty of room for all five of us. We settled the deal and he told us the boat will be ready for us to board at 0600.

The next morning we all got up, got our coffee and headed down to meet the captain of Guerita. We hopped on board and away we went. The good thing about fishing out of Cabo is that the shelf is no more than a few miles off the coast; so within a 15 minute boat ride, we were trolling lures. It didn’t take long into our morning before one of the reels started to scream! As soon as I picked up the rod, a Mahi jumped and twirled and it was just enough for her to escape. No worries, at least we were off to a good start.

About 30 minutes later and getting lost at the lures trolling behind us, I see a splash behind one of the plugs. Before I can register that it could be a fish, the captain yelled, “Marlin!” Everything happened really quickly with the deckhands scurrying around the boat but as soon as he hooked up, a big striped Marlin broke the surface of the water. Mom was up first and we put her in the big chair and as soon as the Marlin quit jumping, she got the rod. The deckhands and all the rest of us cheered her on and encouraged her not to quit because we knew she had a really good one on the line. About 20 minutes later and several more jumps, we got the fish next to the boat and in her lap for a victory picture. They measured the fish and it taped an impressive 102 inches. A very nice fish, especially for your Mom’s first!

We quickly made the release, dropped the baits back, and begin trolling again. It couldn’t have been ten minutes and I’m pretty sure we all yelled “Marlin!” at the same time. It’s always exciting to see nothing but their bill sticking above the water and swiping at your lure. Once again, we were hooked up and this time it was Pop’s turn. This fish was not near the size of Mom’s (which we heard about for the remainder of the trip) but gave some impressive head shakes. A little bit shorter fight followed and we repeated the scenario, putting the fish in his lap, taking a few quick photos and making another successful release.

Back to trolling we went and the whole boat was enthusiastic of how the morning was already going. Once again, it was not 20 minutes later and another bill pierced the water. This time it was my turn but we quickly backed down on this Marlin and were in a rush. The captain spotted a group of birds working and a few dolphins hanging around them. My fight was less than 5 minutes but I am completely alright with that because I knew we need to be the first boat to the tuna. It was not long and we started hanging into them and finally getting to put some fish in the cooler. We did this for the next several hours and put eight smaller tuna on the deck and landed another smaller marlin, making our total of four for that day.

That evening, we found one of several restaurants on the marina that would cook our fish and it was the best meal we had while being there. We replayed all the scenes of the day and thoroughly enjoyed our evening. My parents were scheduled to get back on a plane and head back home the next morning, leaving my brother, his girlfriend and me. We decided that the last day we would spend one more day fishing but this time get an earlier start and try for roosterfish.

We got to our boat and made a decent run up the beach, away from all the condos, and began trolling live bait just off of the beach. It was by far one of the prettiest mornings I have seen in a really long time and that in itself was worth the trip. As the morning went on we lost a few baits to needlefish and it was looking grim for a time. I glanced over at my brother and he had perked up and I could see he was feeding line out to his bait. He gave it a few seconds and reeled down quickly – Fish On! After fighting it for a few minutes and not sure what he had, we were able to see the dorsal fin…unmistakable a rooster. We got it in, made several pics and then accomplished a clean release. It had taken him several trips over a span of five years and roosterfish was crossed off his species list.

As the day went, we caught two marlin and a mahi, and my brother’s rooster. We packed up that evening and headed out the next morning. On top of the fishing, we got to see the whales migrating through the region and that in itself is worth making the trip. Cabo was an absolute blast. The fishing was phenomenal, the food was incredible, we had perfect weather and the people were very welcoming. What else could you ask for?