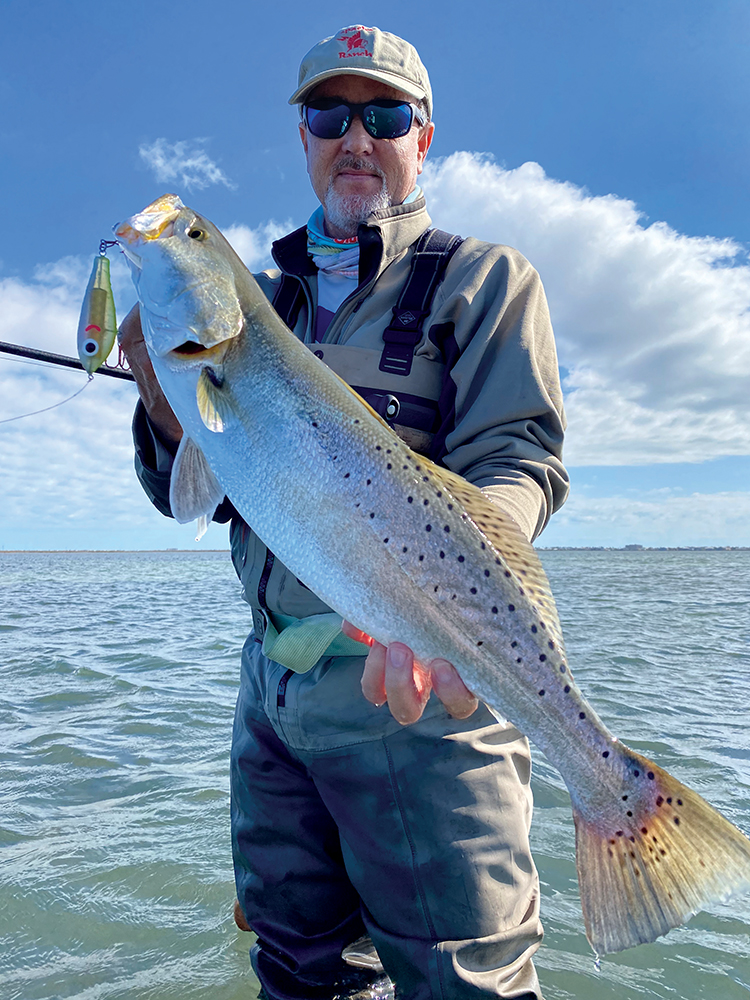 I hope everyone had a safe and enjoyable Christmas and New Year with family and friends. As I prepare this month’s article Jay Ray and I are also preparing to leave for our annual two month stay in Port Mansfield with my Fishing Club members. Our program will be the same as in all previous years – total catch and release of speckled trout. We fully understand the positive impact catch and release can have in general, and also recognize its heightened importance in the wake of the disastrous freeze last February. Jay Ray and I observed it firsthand and I honestly felt sick after seeing the numbers of large trout we lost.  We like challenges, so this year should be all of that and more.

I want to talk this month about fishing with Fat Boy lures from MirrOlure and Custom Corky. I firmly believe that Custom Corky makes the best clear-water color patterns on the market today, developed specifically for the Middle and Lower Texas coast, with input from some of today’s very best trophy trout anglers. Literally tons of hours of field-testing work went into these designs until the patterns were finalized. One of the newest colors coming in 2022 has been in the works more than two years, which should tell you how meticulously they have been working. MirrOlure (owner of Paul Brown Lures) makes the Pro Series Fat Boy, a silver or gold hologram lure that descends slowly in mostly horizontal (flat) fashion with a realistic wobbling action. Custom Corky also makes all of their custom colors in this series as well. Good pro-staffers are hard to please and that is what I love so much about the MirrOlure, Custom Corky and Texas Customs team.

So, what makes the Fat Boy so effective in the winter months versus summer? No real science here, but I personally believe that when smaller baitfish become scarce in winter, the Fat Boy represents a size and shape that trout prefer. The Fat Boy is shad-shaped by design, created by Paul Brown years ago, likely with input from fishing buddies and pro-staffers along the way. I fell in love with it at first sight, based on the numbers of shad I have found in trout stomachs over my career. Shad are definitely fewer in the winter months, which led me to believe that this could be some of the reasons for the lure’s success.

Years ago I watched Cliff Webb take Fat Boys out of the package and drop them in a bucket of salt water. If it sank slowly in a horizontal descent with a slow wobble, that was his Fat Boy. No wobble or sinking head- or tail-first, Cliff discarded it. A very valuable lesson for me and one that I still employ today with every lure. Sinking in the fashion described, wobbling side to side, allows the hologram to reflect all available light naturally. I also firmly believe that there can be too much reflection, which is the reason behind Custom Corky Fat Boys having either glitter or hologram, but not both.

To my thinking, I don’t want the fish to see the entire bait, just enough to sell her on the fact that it is something to eat. Building on this, I have always been a fan of lure colors that have low-impact color schemes. In shallow water, sunlight penetrates the entire water column, so fish see reflection and size well. I believe that shine or glimmer/glint created with each wobble of the lure is critical when fish are reluctant to eat. Let’s face it, when they are on a major feed, they are wrapped up in eating all that moves in front of them. It’s all the rest of the time that we need to be concerned about.

Travis McKee told me that the best way to consistently catch fish on a Corky was to try and remember exactly how one was working the lure when they caught a fish and then try to replicate that action. It’s simple and so very true, a tip I have never forgotten.

Every angler has their own lure rhythm or retrieve cadence. The brand, length, and action of the rods that we select also determines how the lure will react to the action we are imparting. Simple as that sounds it’s not really at all simple in practical application; ask any angler who has spent many years and thousands of dollars trying to figure out. For me, the Henri 6’6”Med-Light Ultra CS is the best choice for the rhythm I have developed over the years.

What works best for me is a rod with moderate power versus fast or aggressive power. The moderate power allows me the luxury to overwork the lure, which is natural for me, with the forgiveness of moderate power absorbing some of that aggression, while still creating lure action that entices fish to strike. A rod with moderate power will also absorb those first frantic headshakes which provides the angler a better chance of landing truly large trout. Whatever brand of rod you choose remember that it is rod’s action characteristics that will make it the right one for your style. I strongly believe that a 6’6” Med-Light is the best all-around action for what we want the Fat Boy to do for us.

The aggression with which we work the Fat Boy changes like the weather, actually with the weather, you might say. Remember that fish will acclimate to cold water temperatures, and once acclimated, will return to a normal level of aggression in feeding. To believe that one should always work a lure very slowly during winter because of cold water and air temperatures would be unwise. While true that a sudden and dramatic drop in water temperature would dictate a slower than normal presentation, such is not universally applicable. For me, water temperatures below 55° will get me to thinking slower. Higher than this I am in a normal aggressive mode of operation.

Predators like to chase and kill and speckled trout are some of our bay’s best predators. If you can begin to think about what it is that makes a predator react to prey it becomes easier, for me anyway. What makes a cat pounce on its prey? I always suggest to my clients that we should think of trout as the cats of the bay. With that said it only stands to reason that we should approach them with this in mind. I want to create an action that says. “Hey, come get me if you can.”

It is also important to remember that during a single cast we might have to employ multiple actions and sink rates. For example, if you have shallow grass beds lying ten to twelve inches below the surface but surrounding potholes are more than two feet deep, you need to slow the retrieve as the lure enters the pothole. This is probably the single biggest mistake I see inexperienced anglers make with their lures. We must pay attention to bottom undulations and adjust during the presentation. Bottom composition (texture) is also critical, but I will reserve that discussion for another article, maybe next month.

I have been fortunate to have had the luxury of watching literally thousands of fish eat lures. I am constantly aware of what I need to do to make the fish react in a positive manner. On a long cast, in my mind I see with every twitch or turn of the reel handle how the lure is reacting and this is a huge advantage for me. I struggle fly fishing because the strip, twitch, bump are new to me, but I can still see what it is that I should have done to catch the trout that turned away from my fly. It’s instinct that only comes from a lifetime of dedicated observation of a lure’s action and the reaction fish have in response to it. In the beginning I was observant because I needed to be in order to become good at my job. Today, observations are opportunities to teach and help instruct anglers on the water.

In my video this month I discuss the color patterns of the Custom Corky Fat Boy Series. To see more of my videos and video tips follow us on Instagram at jaywatkinsfishing.