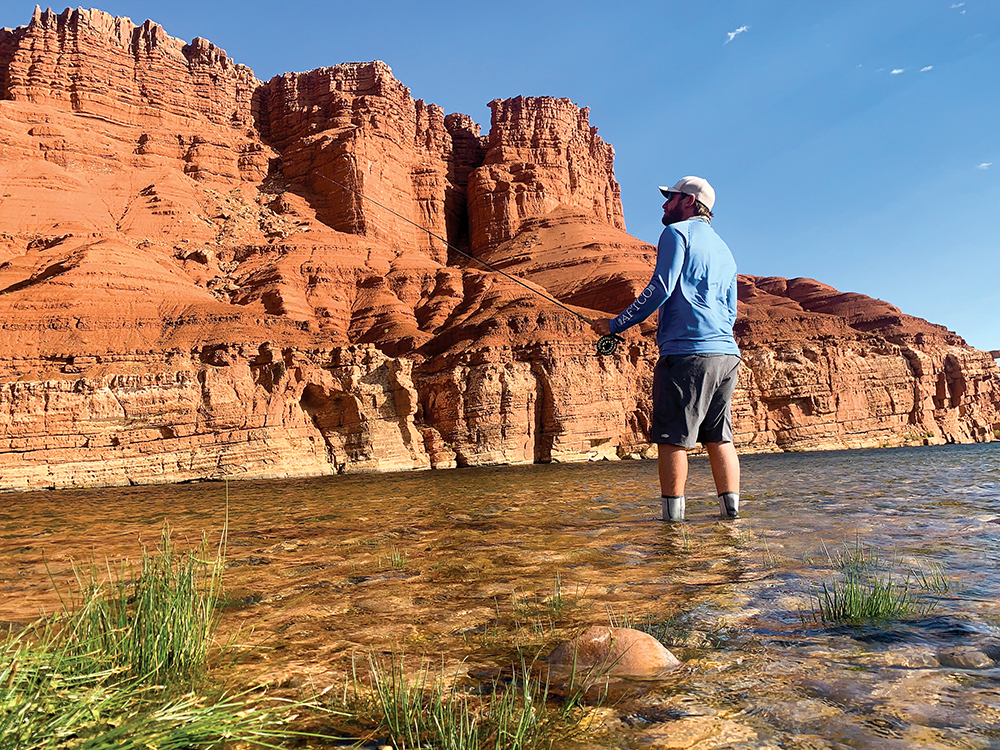 One of the most valuable lessons I have learned in life is that the world is full of opportunity. In the realm of fishing, there is no shortage of places an angler can fish, you just have to look for them. I personally love to challenge myself by finding new places to go. I believe by doing such one can learn from their experiences and in turn become a better angler.

I recently had the opportunity to travel to Arizona and the first thing that came to my mind was, “I wonder how the fishing is there?” I know that when you talk about fishing destinations, this dry, desert state usually is not the first to come to mind. However, after looking into the subject, it can be done and there are a few notable places that hold an abundance of rainbow and brown trout.

Originally I was going to Arizona for a weekend of playing golf in Scottsdale to celebrate with a friend who is about to get married. I had some extra time off so I figured since I was already there, might as well do some fishing. So after the weekend festivities, I headed north and my first destination was Lee’s Ferry in Marble Canyon. This is located just north of the Grand Canyon and it is the tailwater of Lake Powell. For reference, if you have ever seen the iconic photo of Horseshoe Bend, it is about a mile upriver from Lee’s Ferry. After a drive of several hours and a pit stop at an overlook of the Grand Canyon, I started to make my descent to the banks of the Colorado River. I only had a few hours that afternoon but I walked around and did some scouting for the next day. I knew where I wanted to start and made a game plan.

The next morning I got up and eagerly headed straight to the river. After about a half mile walk upriver I was greeted by cool running water, enormous red walls that towered to the sky and wild horses on the opposite bank. I was in awe before I even made a cast. I started out throwing a nymph rig, which is standard for most rivers, and I slowly made several drifts with it. After covering plenty of water and only having one hook-up, I decided to change it up a bit. I tied on an olive wooly booger in order to cover more water. I walked a little further up to a small point and it didn’t take long until I was hooked up. She gave me a few good jumps but never could escape. Finally I landed my first trout and could not have been any happier. Everything was coming together!

I snapped a few quick photos, made the release, and got right back to it. About ten casts later I hung into another one, and this time a better trout. After a short but careful fight, I got her in and same thing – quick photos and release. At this point, my trip had been made and everything else going forward would only be a bonus. I continued on throughout the day and eventually breaking off my wooly booger on another good trout. As the sun started to set I tried my luck at throwing a dry fly. The cicada hatch was about to begin, so I figured…why not? I had three very aggressive blowups on the fly but never got a hookup. It was still really awesome to watch such a small fish react so explosively. Once dark came, I headed back to town for a bite to eat and spent my evening on the porch gazing at the stars. It was one of the best nighttime skies I have ever seen.

The next morning I planned on repeating the first day strategy. I figured I had until around noon before I needed to get on the road to my next destination. I decided that I was going to stick to nymphing and try to build my confidence using this rig. I began on the same point and started casting upstream while my rig slowly drifted across the riffles. Not too long into the morning I hung into a nice rainbow; great way to start the day! I then began to bounce back and forth between the next small point upstream and only landed a handful, but hung into several that came unbuttoned. At around midday I decided I better get on the road, so I packed up and my next destination was Oak Creek in Sedona.

A few hours down the road I started to make my way through the mountains and was relieved from the desert heat by their low-80s temperature. I weaved down the mountains and the highway ran right along Oak Creek. I pulled over at a few walk-in spots to see what I would be dealing with. I knew that I was going to have to hike down to the river so I decided that I would just start fresh in the morning. I checked into my room and decided to go see the town. Sedona is located right in the middle of the mountains, surrounded by tall red cliffs. I would recommend anyone looking for a weekend getaway to put this on their list.

Morning came and I headed down to one of the nearby state parks to have an easier entrance to the creek. After getting to the bottom I decided to head upstream to escape the crowds and see what I could find. The walls were narrow and the creek was lined with huge rocks that made for a tough hike. Luckily I’ve had my share of running down similar rocks on the levy roads of Pleasure Island. The first big pool I came to held a handful of nice trout but another angler had already beat me to it.

No worries though, there was plenty of creek ahead and I continued on. The next pool I came to had a few fish swimming around but I could not get one to bite. I trekked forward repeating the same process and continued to run into more anglers and people swimming in the deeper water. After about a mile or so upriver I figured that these fish are pressured way too much by all the walk-in traffic and would likely be hard to catch.

Already getting into the afternoon hours I decided to just stop and enjoy the magnificent scenery. I reflected on the past few days of fishing and all that I learned. I was pleased with how my trip had gone and was glad that I decided to break away to do something different. Although it was far from my normal style of fishing, I got to see some of the most pristine land in our country. I spent my last day in Arizona sitting at the edge of the creek watching trout lazily swim around in their own little world.