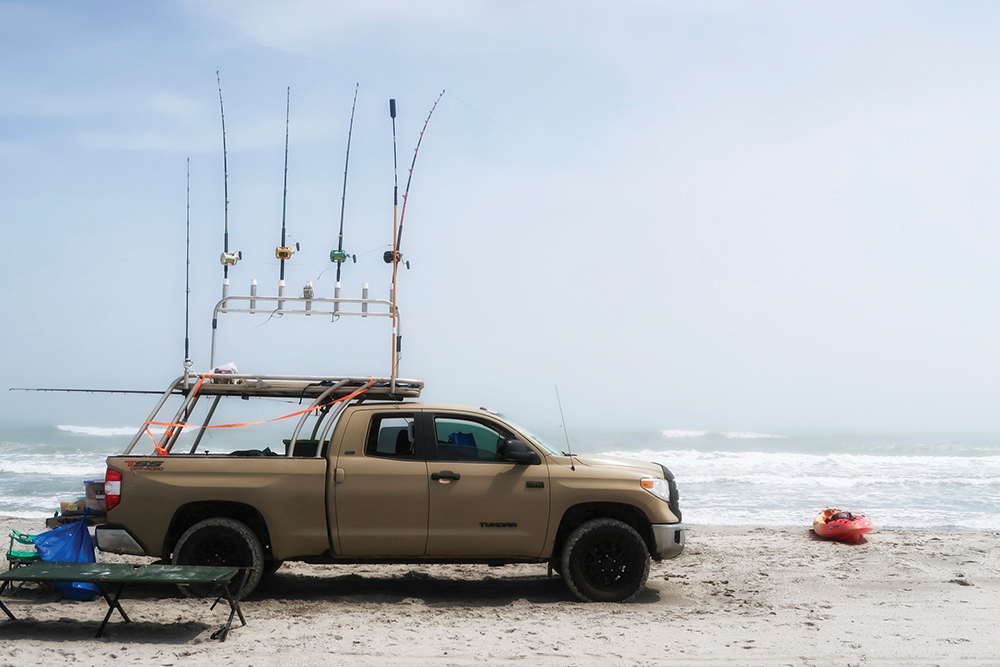 Thick, salty fog takes no prisoners as it envelopes everything on the beach.

I'd truly rather fish the waters of the Lone Star State than anywhere else in the world. As Texans, we're amply blessed with an astounding array of opportunities, not just in the fishing realm, but also the entire outdoor recreational world. The Texas coast, a unique gem of sorts, endures everything nature throws at it.  The weather varies widely, from freakish snow storms to searing heat and hurricanes, stagnant droughts and saturating floods.

What many people don't fully appreciate is the unforgiving hazard inherent to the air of the Texas Coastal Bend—corrosive and hostile, it takes a toll on everything it touches. Aggressively, the salty breezes protect our fishery, providing us with occasionally uncanny action, but our gear pays a high price in the process.

For surf fishermen, quality gear is our life's blood. Like illustrious medieval swords, our rods and reels serve as weapons for us, the angling knights. And like the knight's sword, our gear symbolizes power, authority, pride, and commitment, in a world built around honor and chivalry. Just as the knights would kneel and pray to their swords, beach fishermen have been caught praying over rods and reels.

Because our gear plays such a critical role in our meaningful quests, most of us treat it with supreme respect. Despite our care and efforts, our equipment inevitably falls prey to the effects of the harsh coastal air. Pristine, shiny reels quickly begin showing signs of wear, aluminum becomes marked with pits, and bags of leaders recede into rusty graves which never release their grip. Though we valiantly fight the good fight, the outcome of the war remains inevitable, once the process officially begins.  Corrosive effects prove impossible to reverse and all metallic items eventually succumb.

I fish and practically live on Texas beaches at least 100 days every year, so I feel the effects of corrosion on my gear more than the average angler, but no beach goer can hide from the Gulf's cruel breath.  Some areas of the Coastal Bend endure almost relentless onshore flow. Corpus Christi ranks among the windiest cities in the nation.  What makes the situation so drastic is the content of the restless air. Our surf acts like a washing machine, as turbulent waves crash onto the sand.

Salt sprays into the warm, moist air and blows onshore, essentially making the air toxic to all metallic things. Our regularly muggy,  warm wind amplifies the speed and effects of the rusting process. Like graveyards, our beaches become the resting place for the rusted remnants of trucks, trailers, and all things made of steel. Anything other than stainless steel, copper or aluminum rusts almost immediately.   The rotors on the brakes of the truck grow a thin layer of rust in half a day.  Grocery store shopping carts five miles inland show signs of noticeable rust within a month of use. After a year or so, corrosion renders the entire fleet useless. The whole process eventually proves truly catastrophic.

This hazardous activity also compromises our main fishing gear. If not rinsed properly after every trip, expensive aluminum reels used for shark and offshore fishing develop pits and calcium deposits almost immediately. The corrosive effects of salty air appear on aluminum first as small pits, or holes in the metal, initially not deep enough to affect the integrity of the material. Eventually, these pits eat away at the metal and render the gear useless.

The effects of saltwater differ on hooks and other non-stainless tackle. Hooks become compromised by corrosion almost as soon as they taste the air. A set of hooks left on the tailgate of the truck overnight show rust by daylight. If left exposed, they turn to dust in what seems a ridiculously short time. Like the hooks, internal parts of the reels suffer greatly from the corrosive effects of salty air. Rusty bearings seize up, paralyzing reels and requiring replacement surgeries. Some line-guides on fishing rods can also be compromised by corrosion.

Most stainless steel knives used for cutting bait and lines put up a good fight compared to other components, but they too exhibit signs of corrosion. Rusting generally makes metal brittle. Everything from EZ-Up style shades to portable gas grills are highly susceptible to rusting and live on borrowed time as soon as they're introduced to the environment. But super salty air consumes more than metal.

Over hundreds or thousands of hours, the humidity and chemicals in the air break down the rubber on the handles of fishing reels. Some paddles peel off in layers; others turn into a doughy goo. Another destructive effect of moist salt air occurs when thick fog blankets the beach. Then, the normally crystal clear epoxy on long rods turns cloudy, as the ever aggressive elements seep in. This nagging effect does clear up when the rod dries and is wiped clean.

Other things don't fare so well—notably, our vehicles, the costliest casualties of salty air and water.  Even professional undercoating jobs cannot fully protect them. My current 4WD has been a beastly beach machine, logging more hours and miles on Texas beaches than any other vehicle I've owned. I'm now pushing 100k miles on it, probably 80,000 of those being beach miles. Over time, I've replaced countless leaf springs and brake assemblies, and had both front and rear drive shafts completely rust through. Most bolts have completely rusted out, despite being washed after every trip. I routinely re-apply the undercoating, but the sand blasts the new surface and reduces its protective qualities almost instantly.

Like a knight caring for his horse, I've taken exceptional care of my truck and gotten more life out of it than most anyone else would, but the time will soon come when I must replace it. During this crazy time in the world, I cannot tote the note on a new truck alone. I need a sponsor to assist with my research studies and charters. Accordingly, I shout out to my brothers and sisters in the outdoor world, in search of help. I offer an amazing opportunity for a company, dealership or individual to sponsor a unique outdoors persona. A well-recognized individual in the angling world, I've appeared on TV shows, in various magazines, and produced plenty of good publicity on social media. My trucks have appeared on the pages of this magazine through all the years I've written for the publication.

I need a new 4WD; its make is not important.  I intend to personally and thoroughly undercoat and protect the entire virgin truck with some of the newest anti-corrosion technology available, covering many hidden areas which people missed in the past.  Through experience, I've learned techniques to use when creating the ultimate 4WD machine in which to battle the crusty coastal elements.  All knights need a horse to ride!  Please contact me if you have any interest in sponsoring my endeavors.  I hereby pledge to make you and/or your company proud.