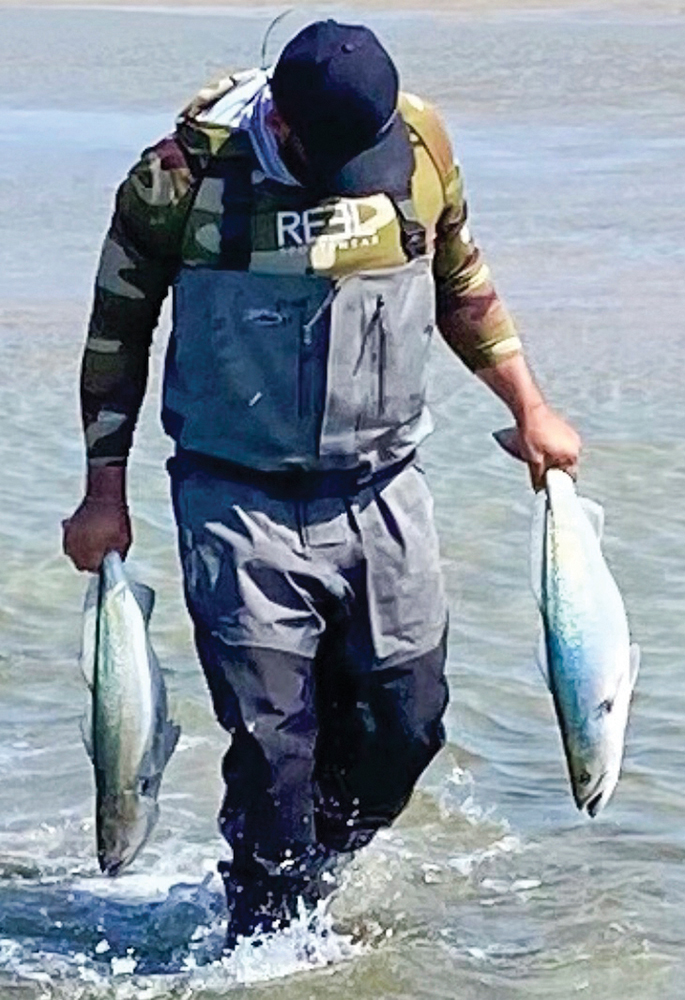 A couple of eight-pounders; a sight that became way too familiar following the February freeze.

This is my first article since the February freeze event three weeks ago that has just devastated our inland bays, especially here on the Upper Laguna and Baffin Bay. Before I get into the fishing, and the affects of the weather on it, I just want to say I hope this finds y'all well and your suffering minimal through the lack of electricity and water during that time. I have family in the rural Hill Country that have been told they may not have power back on until close to Easter. I never thought I would see such a day in our beloved Texas.

I began running the bays daily after the freeze, starting February 20. The water temperature averaged about 43° on the 20th and there was little evidence of freeze-killed fish. Then the water started to warm up and dead fish that had been lying on bottom slowly began to rise and drift toward shorelines. As the water temperature crept toward 60° the number of dead fish along the ICW was very alarming. Every spoil island was stacked with floating dead of all species, but it was the number of three- to- six-pound trout brought a tear to my eye. Of course, there were plenty of smaller ones to go along with that wonderful class of breeding-stock trout, and some real giants as well.

As the southeast winds blew that following week, the dead fish really stacked up on the western shorelines in the Upper Laguna and shallow flats in Baffin Bay and the Land Cut. It was then that we got a very good look at the damage that Mother Nature had actually done. I continued to run charters during that week of warming weather with the announcement of a new policy – all trout fishing on my boat would be conducted on a Catch and Release basis only!

Luckily for us, we did manage to catch trout and even a couple in the seven pound range. As discouraging as it was to see what had died, I was equally encouraged to see that trout were still swimming in our bays. On top of that good news, the redfish bite was very good.

The die-off in the ICW, where we saw the most dead fish appear initially, was no coincidence, in my opinion. While there had been noticeably fewer barges operating during the freeze, some continued to run north and south daily throughout the event. I have known for a long time that suspension of barge traffic during a cold weather event such as this is done so in a totally voluntary manner. Many are not aware of this, and yes, you read that correctly…suspension of barge traffic compliance is voluntary!

It is truly unbelievable to me, and many thousands of coastal sportsmen, that greater steps are not taken, organized, and agreed upon between Texas Department of Transportation and Texas Parks and Wildlife to fully suspend barge traffic during these freak weather events.

The negative impact of this failure not only decimates the fish seeking warm refuge in the ICW, but it also endangers much of the local economy – hotels, restaurants, charter fishing, retail establishments, and on and on. We all knew there would be some amount of fish-kill, suspending barge traffic during those five terrible days of water temps in the 30s and low-40s would likely have prevented a great amount of it.

This is a pivotal time on the Texas coast and I am elated to see the number of fishing guides and recreational anglers committing to a full catch and release program for trout. I have long said that I wish the salt culture would follow the lead of the bass fishermen throughout the country, and release 99% to insure that they will always have a dynamic fishery and prolific spawns.

By all of us banding together we can do that for our Texas bays right now. In the case of Baffin Bay, that is virtually landlocked from coastal passes, releasing trout to spawn has never been more important than the present. Although there have been more devastating freezes in the past, Baffin has never seen as much fishing pressure as it currently receives. Every female trout released is essential to righting the ship and getting us on track for a quick recovery.

Proverbs 27:23 “Know well the condition of your flocks, and give attention to your herds.”