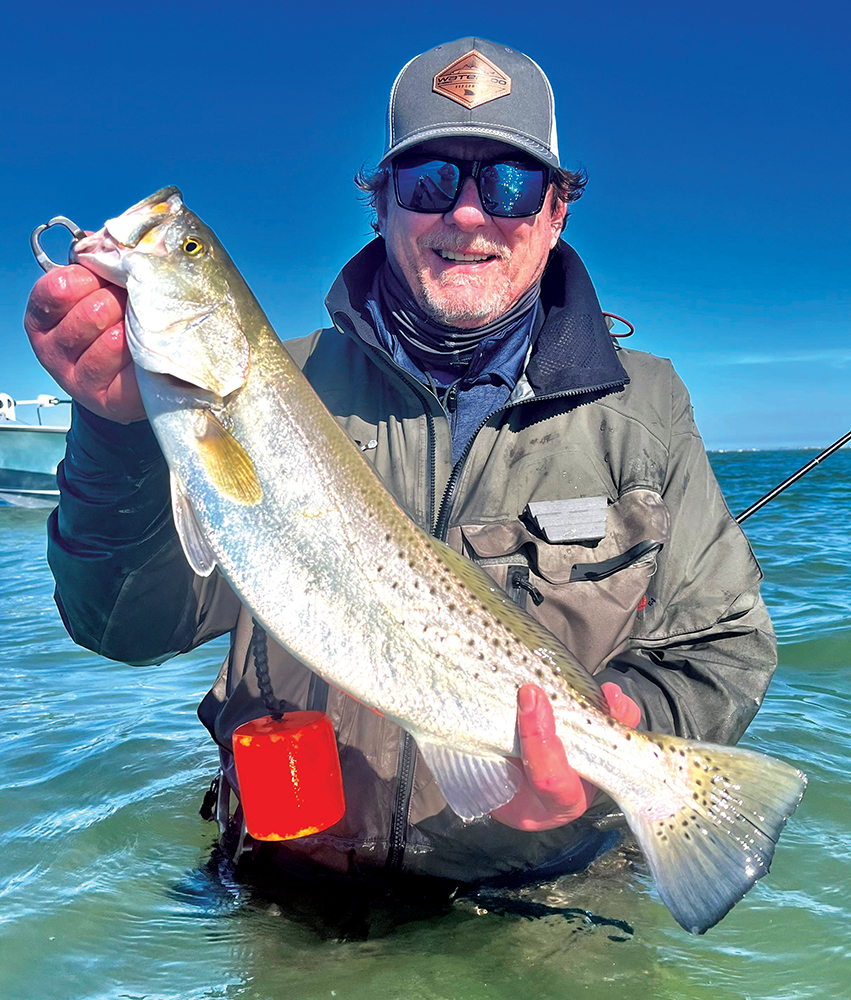 Brendan George with one of many solid trout we have seen this winter, despite the February ’21 freeze. Northern Minnow Bass Assassin – Released!

A little over a year has passed since the big freeze last February.  That devastation via Mother Nature dropped the hammer up and down the Texas coast, but I can honestly say we are catching lots of fish…in certain areas.  Our fall and winter trout fishing was a bit of a shock to me, as we had many days with great numbers of bites.  That being the positive, the trophy quality fish (7-pounds plus) are very hard to come by, although we have caught some.  The good news is that there are a substantial number of  3- to 5-pounders in the area that have been keeping us busy and our hopes high. Combine some common sense with a conservative mindset and the future looks bright.

So where were these trout after the freeze and throughout the summer?  Trout came in from the surf to fill the void and take advantage of all the baitfish that were not being predated upon?  I tend to go with that theory, although I could never prove it.  Here in the Upper Laguna the resident trout have a very unique appearance – very dark backs, twice the number of spots that you would see on a trout from, say, Laguna Salada in the back of Baffin, longer and thinner, and almost a tangerine-colored mouth lining.  The trout we have been catching are more characteristic of surf trout – stocky, very silver in color, pale yellow mouths, with uniquely strong fighting ability.  Honestly, it's a mystery to me, but my clients and I are dang sure happy to have them in the bay system.

March 16, 2022 was the first day of the much-needed revision to trout regs.  Through August 2023 the limits will be three fish measuring 17 to 23-inches. Personally, I wish that 23-inch size was closer to 20-inches, but we will take what we can get.

Considering the number of folks utilizing the resource, and many killing whatever they can, these more conservative limits could have been put into affect even without the freeze – in my opinion.  The human ego can  be a detrimental thing, and that has proven to be the case, more often than not, when it comes to braggarts and social media.  Fish hanging on nails to promote a business (that relies on a public resource) is just a small way of thinking when you have a bay in peril, and trying to make a comeback.  If your ego is bigger than the resource, you really need to do some soul searching and find a new line of work or recreation.  Over 700 licensed guides in the Coastal Bend now, I just learned.  Guides with clients plus non-guided rec anglers and you can easily see how many fish come out of the bay in a season.  Combine that with a freeze kill scenario and you can clearly see we have an uphill battle to have a great fishery again. Funny thought, the majority of fishermen seem to be good old gun-toting conservatives, but when it comes to killing fish, they’re about as liberal as Bernie Sanders.  The same group that doesn't want the government telling them what to do kills the most fish because the government says they can. Baffles my mind.

Much like March,  April will have some of the heaviest trout of the year. Typically, they will not have spawned yet, and are gorging daily on a fresh food source making its way in from the Gulf.  The topwater bite will be in full swing and towards the end of the month we should be able to wet wade.  My mindset will be towards shallow water spawning areas well into May.  Like I mentioned last month, windward grassy shorelines will be my first choice when it comes to finding the largest trout that might be taken on an artificial lure presentation.

Lures choices can run the full gamut during April.  Floating plugs such as the Fat Boy Floater and all the Dog series from MirrOlure, the Double D by Texas Custom Lures, and Bass Assassins rigged weedless or on the very small 1/16 Pro Elite jighead will be my go-to numbers when searching for big spawners up shallow.  I try and keep color selections really simple; muddy/stained water I tend to go with brighter and darker colors, while in clear water I keep it as natural and native-looking as possible, including eliminating lures with bright tails. The bright tails encourage too many piggy perch bites in this area.