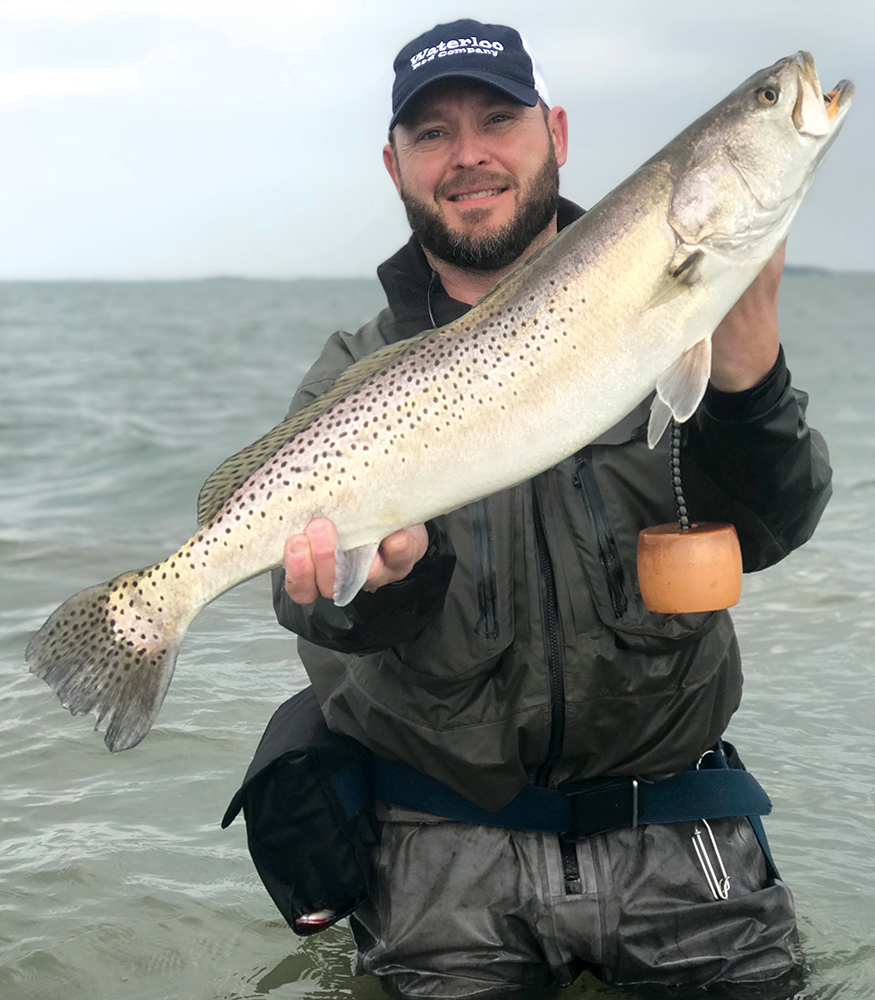 Michael Fry with a true monster of the flats; 31.25-inches and 9.5-pounds. Bass Assassin, literally the last cast of the day! Released healthy to spawn again. Congrats, Mike.

The seasons are flying by faster than live croaker during a 50%-off sale. Seems like only yesterday the sweat was rolling down my forehead and burning my eyes back in August. Now I'm receiving packages almost daily from Simms stuffed with layers upon layers to keep me warm. I'm certainly not complaining about layering up. In fact, it's about my favorite thing to do, as I know those extra clothes mean I'll be outside enjoying God's many wonders.

December is such a fabulous month here in Texas. Regardless of your outdoor passion, everything is in "go mode" this month. Bucks are rutting, ducks are flying, quail are flushing, and big trout are becoming a bit more predictable. Although my trophy trout season is currently in full swing there is no rest for the weary when I get a day off. If I'm not pushing my big Haynie through the waters of Baffin, I'll have a bow in my hand or a long, pointed pole to flip rocks to confirm whether what I just saw on the ground was an arrowhead or simply a rock doing a great imitation, (most of the time).

Chris Bush (Speckled Truth Podcast) and I just did a sit-down to discuss trophy trout fishing and the current state of the Baffin Bay fishery. That conversation being fresh on my mind, and some stories I told, sure have me reflecting on great things that have happened for me in Decembers past. Two of the best days I ever had took place between Christmas and New Years Day in the early 2000s. Back-to-back days of 85-pound ten-fish trout stringers. But before you accuse me of being a hypocrite or game hog; all those fish were released successfully as they were landed and none were placed on a stringer. The mention of 85-pound stringers is merely a reference to the average of the best ten fish caught on those two wonderful days. I truly wish every serious angler could do that for themselves…just once in their lifetime. To this day I can almost remember the individual spots on every fish. Such a wonderful memory.

It’s no secret that we are in a much different time and place now with the Baffin fishery. By today's standards any angler catching five trout over five pounds has had a monumental day…but there was a time not so long ago, young Grasshopper.

By the time this magazine hits your mailbox and newsstands across Texas, the TPWD commissioners will have decided which path forward should be taken to boost the recovery of the spotted seatrout fishery, and how to manage it more proactively in the future. Their plates are full of hard data now, nine months after the devastating February freeze, data they did not have earlier.

My fingers are crossed that they get tight on bag limits for at least the next three years (four or five would be better) to get the fishery back to where it once was. Mother Nature and man have both laid a damn good whackin’ on it and we all need to pull back the reins if we ever want to have a quality fishery that offers a legitimate chance to catch a giant each and every day.