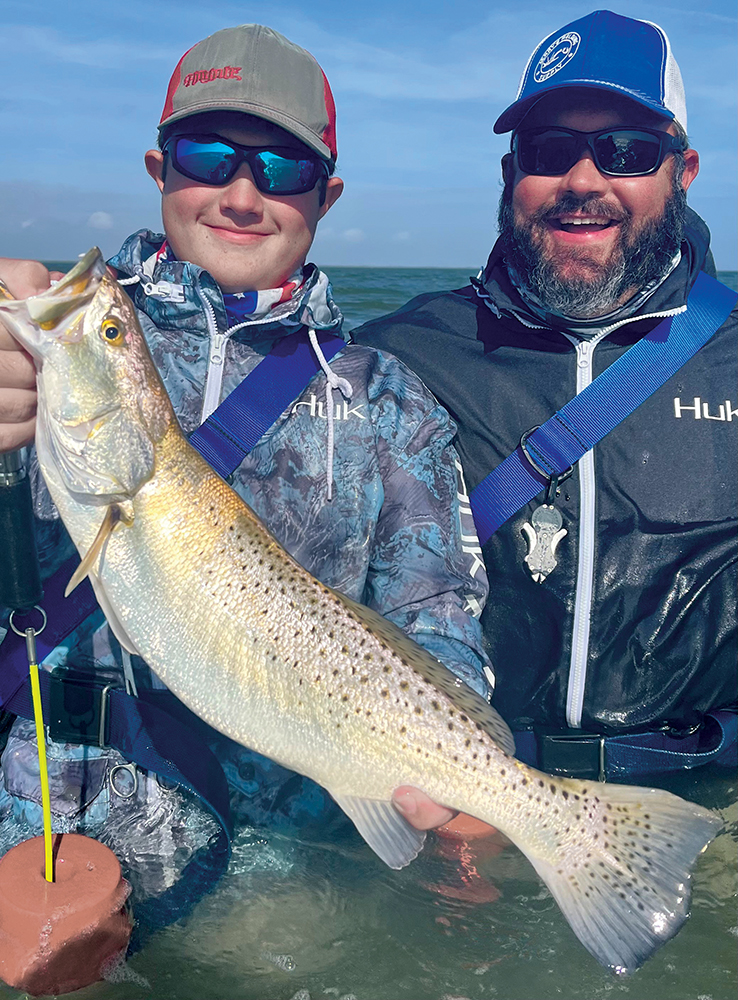 Last year’s freeze still weighs heavily on my mind.  I will say though, I am somewhat optimistic after seeing a few quality fish coming to hand the past couple of months.

By the time this article hits the newsstand, TPWD will have hopefully enacted new trout regulations for the Middle and Lower Texas coast. The Coastal Fisheries Division has proposed a three fish bag limit with a slot size of 17-23", effective from date of enactment this spring until August 31, 2023. In my opinion this is a step in the right direction and is predicted to increase spawning biomass by 27 percent. Personally, I would have preferred a slot of 17-20" and a two fish bag limit which, according to their data, would provide a 60 percent increase in spawning biomass over those same two years.

As much respect as I have for TPWD, I feel they are between a rock and a hard place trying to please user groups, versus what might be the overall best strategy for the fishery, and I get that.  The kill crowd clamor for no change while sportsmen plead for quality over quantity. To me, keeping the peace includes politics and politics should have no place in fisheries management. The only people bitching about reducing the bag limit are the ones doing the greatest majority of the harvesting, which is painfully evident in the present state of the fishery.

Powerful northers in early January produced a huge tide dump in the Upper Laguna and Baffin, bringing a lot of structure into play that had recently been too deep for wade fishing. So much new structure became available that boats were able to spread out and provide us all a little breathing room.  It was much needed as high water conditions were really limiting the productivity of our wades.  While some might not understand, there are days when the fish are simply not on shorelines or right on top of a spoil bank. Throughout most of the fall and early winter we were denied wading access to large areas of great structure but now we can see mullet 150 yards off the shorelines and get to them. Find mullet on structure and you are in the money. Go with the signs and trust your eyes!

Good ole February needs no introduction. Probably the most fabled month of the year thanks to the late Jim Wallace and his Feb. 6, 1996 catch of the state record trout. Wallace’s lure, little-known at that time, was none other than Paul Brown’s Original Corky. Rather comical when you consider the cult following the Corky has gained over the years. Not sure whether this is true, but I’ve heard Mr. Brown says a daily prayer for Wallace. True or not, I wouldn’t blame him if he did.

MirrOlure acquired the Corky line from Brown back in about 2010 and have been doing a fabulous job with it. I am very proud to be affiliated with such a bunch of hardcore lure makers. Truly folks, this company is made up of stud outdoorsmen that really get it. Along with MirrOlure and the customized versions from Texas Custom Lures, the big trout catching world is a much better place for it.  That being said, can you guess what I have hanging on my loop knot 85% of every day in February? You guessed it… and it's not just to be in the cool kid club. It's because it catches the biggest of big trout – plain and simple.

As we roll into early spring we are filled with excitement to be waist-deep in the bay casting our Corkys and Bass Assassins for what may be the largest trout of our lives.  This passion we share is real and one that needs our help, as stewards, to get it back to where it once was.  We are in a unique position at this very moment to make a difference if we all band together and do what we ALL know is the right thing to do – releasing every trout that comes to hand.

When the freeze came I committed my charters to releasing all trout for a minimum of two years.  We have succeeded in that commitment with zero complaints or refusals from my clients. I challenge all sportsmen to do the same, ESPECIALLY the guiding community. Band together and govern ourselves to Make Baffin Great Again. It's our time to make a difference in our fishery!