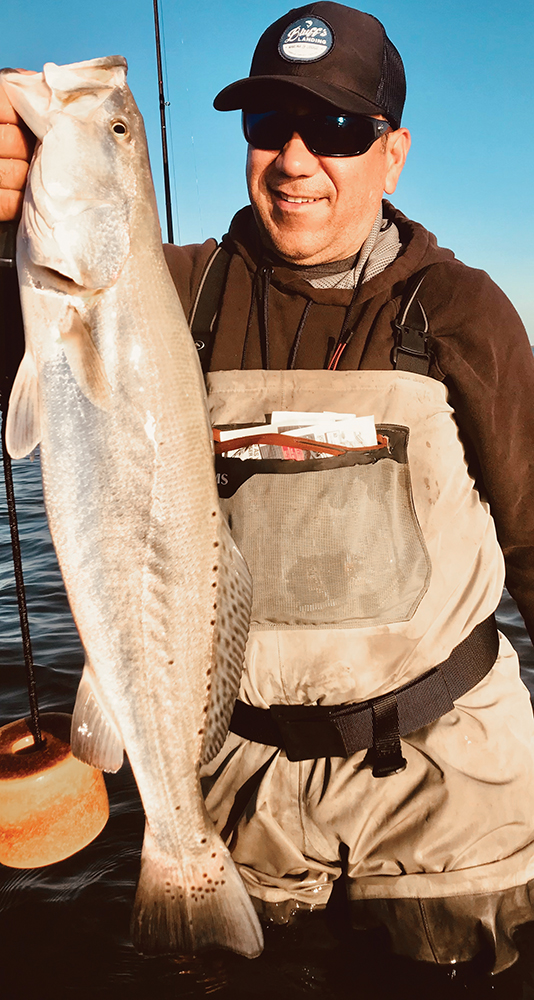 Here’s David Benavides with a healthy trout that fell for a plum Bass Assassin; promptly released to do some much needed spawning later this spring.

I moved to Texas in '82, now it's 2022, and I am 52.  Could someone please pump the brakes on these years rocketing by?  I do not mind aging, but damn, I just realized I am now closer to the end of my fishing career  than the beginning of it.  It would certainly be fun to go back in time with knowledge I have now and restart the process.

Capt Billy Sandifer and I were coming off of the beach one evening and Billy posed a question; "Kid, if you could have one special 'fish power', what would it be?" I hemmed and hawed for a few minutes and replied; "It's not really a special power, but if I ever get to Heaven I hope there is a video booth where I can watch and identify every big trout I have lost, the ones that almost took it and backed off, and the record book fish I was casting around without knowing it. "

Billy took a long pull on the stub of his stogie and said, "That sounds nice (sarcasm)…but not going to do you any good tomorrow."

Being asked such a question by an old beach-fisher fish magician, I knew he had something he wanted to share, so I asked, "What would yours be, old man?"  Exhaling a cloud of smoke he said; "I wish I could look right through the "gosh darn" water, and see every SOB in the ocean, so I could catch every one of them I wanted to."

My head kinda bobbed in agreement, but I had to remind him that would eventually get old, no longer a challenge, and be more on the side of marksmanship than fishing.  He promptly gave me his famous go-to-hell look and said; "I'm sorry I ever rubbed off on you, you use to be a very pleasant kid."  We both cracked up laughing.

As we are now in the heart of trophy trout season I could use some of Billy's super power right now.  I have always heard and adopted the theory that trout over 27" make up less than 1% of the total population.  I certainly found that to be the case in the four years prior to the 2021 freeze.  Without scientific evidence, I think it fair to say that number is now a wee bit smaller.  We have experienced some outstanding days closing out 2021, all things considered, but real work is going to be required to coax fish over that mark this year.  The good news is, some did survive and have come to hand.  All is not lost, but patience and lots of casts will certainly be a major player for the near future.

I just had a gentleman from Mississippi book three days with me.  He wanted February dates but had to settle for January.  I reminded him of the day in January when I caught my largest trout ever, a 11.5-pound monster that fell to an original Corky.  He was glad to hear of my love for the month and the confidence I have in it.  Trust me, it was no sales pitch.  January has always been a big producer, if not the biggest of the whole season.

Outside of the lures I have the most confidence in to catch such giants, the next most frequently asked question is about my rod preferences.  I will say that I have used about every brand on the market over the past 30 years, but in my opinion Waterloo Rods are simply the best in quality and selection.  Much like boats, there is no single rod that is perfect for every situation, but what comes the closest for me is the 6’9” Waterloo Carbon Mag.  For the greatest part of my fishing career I have always been a 6’6” fan, and honestly, could work any type of lure with it. Jimmy Burns (owner of Waterloo) sent me a 6’9” two years ago to try and I just fell in love with it.  I throw a lot of soft plastic (Bass Assassin) and I quickly realized that the 6’9” has a slightly lighter tip that is just perfect for smaller plastics and plugs such as Double D, MirrOdine, and Soft-Dine, but still with plenty of backbone for heavier plugs like Fat Boys and larger topwaters.  If you find you are throwing more soft plastic on these tougher days, you may want to give a 6’9” Carbon Mag a shot.  And trust me, you will not miss a step, even with a big plug tied on.