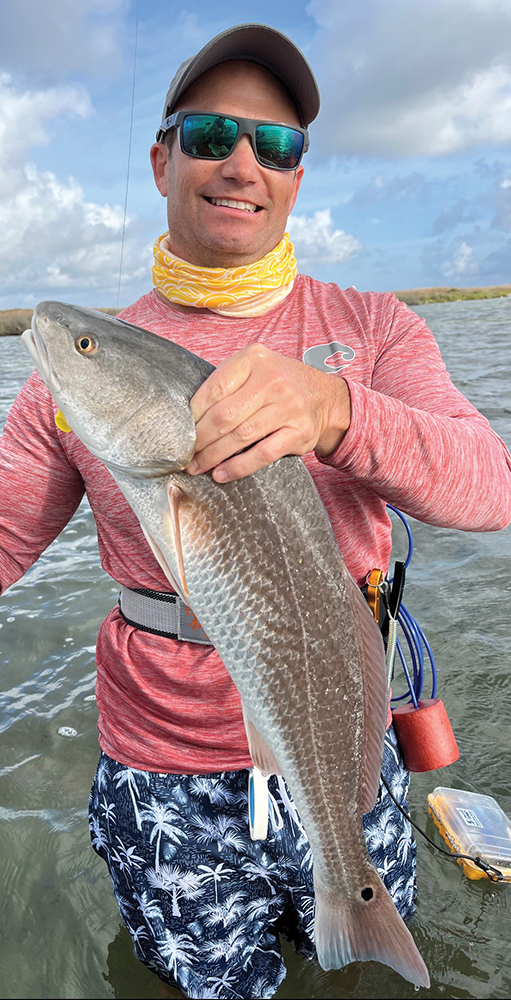 Corey Ferguson with one of many reds and trout caught over two days with his group of close friends. Fun crew that do it for the sport and camaraderie. Catch and release!

I hope this finds y'all sitting in the recliner, relaxing and beating the heat after a morning wade. Forecasts are calling for 100° heat the next several days. If you’re heading to Baffin hoping to catch some good trout I advise an early start. Summer weather got REAL in a real big hurry. On a side note, meteorologists are predicting a super-active hurricane season. Gotta love Texas!

We are experiencing a pretty darn good trout bite.  Much better than I certainly expected, considering the freeze sixteen months ago. I said it last month but will say it again; I do not believe the majority of the trout we’re catching in the Upper Laguna system are resident fish. Some are likely wondering why I would say that, and I get it, but to me it's no different than looking at a favorite pet you see every day. In your eyes your Lab looks different than any other Lab. Same with trout…to me anyway.

Laguna trout are a dark-backed fish, more golden tones than silver, with multitudes of spots and tendency to be long and slim. Baffin trout have a more stereotypical or traditional look; generally stouter body shape, lots of silver, and quite often fewer spots than fish from the Rockport area or the surf.

Admittedly, the distinction between Baffin trout and those that have migrated in from elsewhere can get a little blurred, or harder to identify to someone not handling them every day.  The Laguna trout have not showed themselves hardly at all, and I believe they were just devastated during the freeze.  The few we have caught are, mostly, tiny; which tells me that a few made the freeze and did in fact spawn. Regardless of  being local or not, they are all fun to catch and deserve our stewardship to be released, especially now during a post-freeze recovery.

As the Texas heat unfolds, so does my fishing.  Specifically, I know I have a really good opportunity to catch some quality trout until about 9:30 in the morning.  Come 10:00 a.m., the fast bite will typically fall off pretty hard. Saying that, you can certainly catch them all day, but you will need to be willing to grind it out and make more casts for fewer bites, that might still produce a trophy.  Been there, done that a thousand times.

It is no secret that many large trout are caught in the skinniest of hot summer water, but if going to grind in 100° heat, I'm finding me a deeper ledge or drop-off that has structure like deep rocks and grass lines.  Time and time again that pattern has paid off for me during the dog days.  As a guide, I let my clients dictate how the day is going to go after that morning trout bite. We will either start the rest of the day grind on the trout or I will give them the option to chase some redfish and do some sight-casting.  Personally, I'm good with either one, but every group is different, so I let them make the call.

Trout are slobs when hungry and will eat just about any manmade object you can throw at them.  That is especially true early on a summer morning, and why my wade box has more MirrOlure She Dogs in it than just about anything else.  As much as I love a topwater bite; I use She Dogs as fish-finders as much as lures for catching. Every time I shut my Haynie down to put clients on a wade, I am 100 percent certain there are gamefish present. Whether they will eat good is a whole other story, as we all know.

Regardless of my confidence in where I choose to fish, fish have tails, move a little, and sometimes a lot. So every day we go out there, every wade has the potential of needing a tweak. I can cover a tremendous amount of water quickly by casting a heavy topwater during my search for them. Even if they are not willing to eat the surface plug, they will slap at it and swirl on it enough to let me know they are there.

At this point they are either crushing it or giving me a clear sign that I need to go subsurface with a Bass Assassin or MirrOdine for more hookups than air balls and misses.  Fish them  smart and let them tell you how they want it!