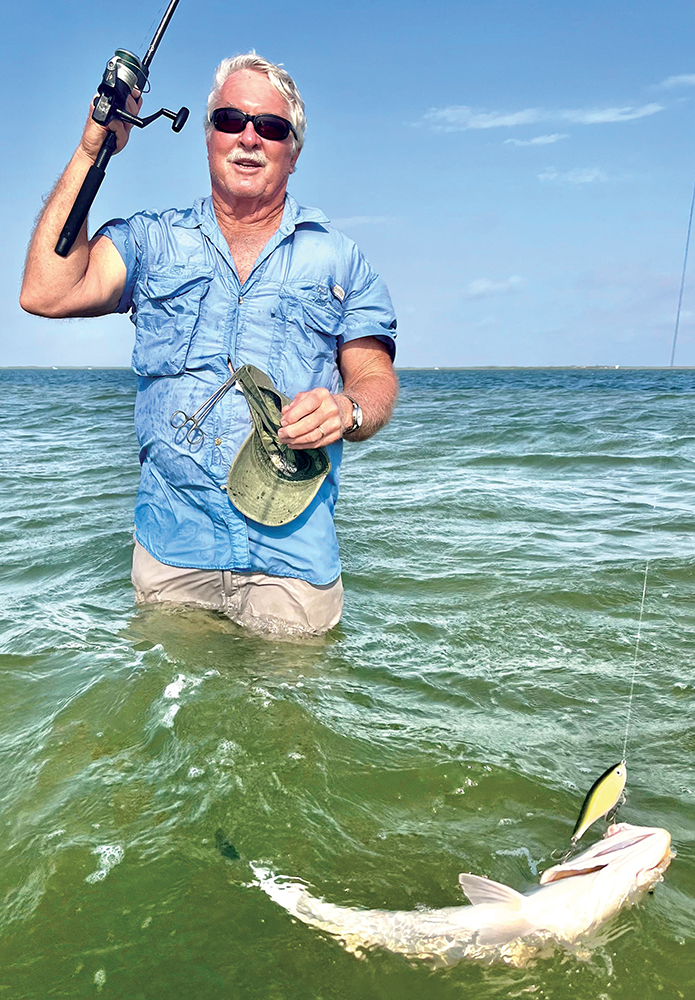 Dr. Alan Zablocki knocking the rust off after a 20-year hiatus from the salt. Said he loved my stance on conservation and that’s why he booked the trip. Perfect client!

Well, we have finally hit summer weather. I always look forward to wet wading and skipping the hassle of waders. Come October I will have grown tired of wrinkled feet and being waterlogged every day.

Thanks to an unexpected migration of fish from the gulf and Corpus Christi Bay, we enjoyed a spring season that soared beyond expectations. The number of quality trout was well beyond anything most of us expected after the 2021 freeze. Looking into the future, I’m hoping they stick around and do not vanish back from where they came. TPWD enacted new size and bag limits that will certainly help, but it’s somewhat disappointing to see so many fishermen killing what they can with little or no regard for the future and what we have a chance to improve upon over the next two years.

I’ve said before and will say again, my hat is off to the younger generation who seem to be all in for catch and release. I’ve had some amazing conversations with many and they give me great hope that the fishery will be given greater respect in the future, like we see in bass fishing, rather than the kill mentality that has been prevalent since live croaker for bait became popular almost thirty years ago. If you have been around long enough and still believe the trout population cannot be decimated by rod and reel, your head is buried somewhere it doesn’t belong. Between the freeze and number of fishermen still killing all the law allows, we continue to face an uphill battle. Be proactive, practice catch and release, and strive to become a better steward of the resource.

I am preaching because croaker season is once again upon us. Sadly, some fishermen will continue their killing while a growing number of others try their best to contribute to the rebound of the fishery. Croaker don’t kill trout, people do. Think about that and tell your guide you want to enjoy a day of fishing more than returning to the dock after only a few hours with a limit. If you are in it for the sport and your guide refuses to honor your wishes, you may want to find another guide. One that is willing to put in a full day’s effort, and maybe send you home with a few drum fillets for a fresh meal.

At this stage of my fishing career it’s hard for me to get  juiced up about fishing to the point it makes my belly spin in anticipation but that very thing just happened. I hadn’t fished a tourney in five years, and perhaps only two in last ten. Jay Watkins and I have been close for a very long time and have always wished we could fish a tournament together. An opportunity presented itself due to a weather cancellation on the weekend of the Aransas Pass leg of the Saltwater Legends Series. The Legends format is three-man teams and we scored an ace stick when Jay’s youngest son, Ryan, joined us. Ryan is a very accomplished angler having won the title of Collegiate National BASS Champion a few years ago. Tournament morning came and my guts were boiling over like a pot of beans left too long on a hot stove. Honestly, I couldn’t believe I was so fired up and ready to compete again. I never realized I missed that feeling so much. We did not win in pounds, but had our chances and lost them as we couldn’t land a few of the right ones we had hooked up. But that’s tournament fishing. The fish we landed came up a little short for a win, but it was a huge win nonetheless as I finally got to knock out a bucket list desire of fishing with my salty hero and his son. It was two fabulous days watching them work sand holes like surgeons and setting hooks like they were winching the Devil out of Hell. For me, I was casting like I was 35-years-old again, and a month later I can still barely move my shoulders. Well worth it!!

The bay will be swarming with life in June. Find bait on good structure and your fishing will turn into catching throughout Baffin and the Upper Laguna this month. Every indication is that June will be filled with lots of action. Enjoy it, but please keep only what you need for a fresh dinner and release the rest.