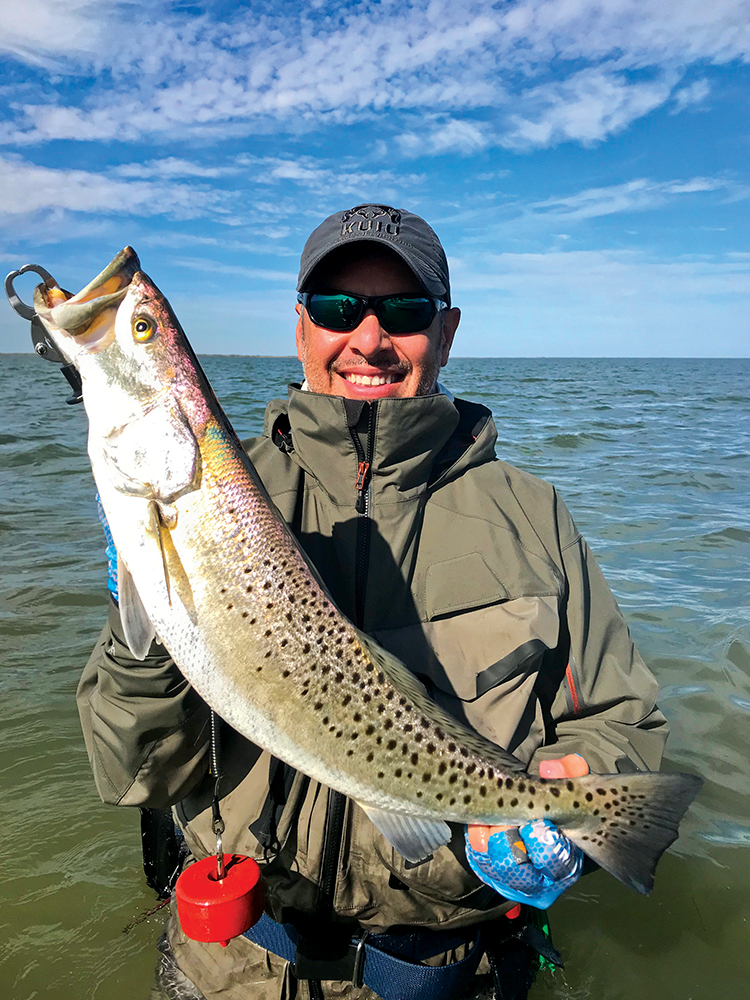 We are now into the heart of trophy trout season here on Baffin and no other month signifies giant trout more than March. Truth is that every cold weather month can produce a stud specimen, but March is a virtual guarantee that the girth will be there along with the length.

There will be some cold days in March but warmer days and southeast winds should prevail to make big trout more comfortable in the shallows of Baffin and the Upper Laguna. Shallow shorelines, skinny flats, and sandbars will start to hold fish on a regular basis, especially the big girls that are heading toward the first spawn of the season.

In preparing to fish this month, one thing to keep in mind and plan for is the wind. March can be as cantankerous as my old friend, Capt. Billy Sandifer. If you knew Billy you will get the analogy. Sweet as honey one minute and giving a beat down the rest of time. March tests us and makes us earn her bounty on an almost daily basis.

One way of dealing with her on these windy, “bad” water days is to always remain confident that the fish are there and they have to eat to survive – and they can be caught. I remember one day I was whining about water clarity to my clients and unbeknownst to me,  one of them (Mac McCune) happened to manage lakes and ponds for a living. Mac grabbed an empty water bottle from the trash, filled it with the pitiful looking bay water and held it to the sun. The water was surprising clear and Mac said, "This is what the fish are looking through."

Voilà! That was a game changer for me and how I deal with “bad” water conditions to this day. Although we couldn't see the structure, Mac, Bill, and I got out of the boat and beat them up pretty good, best I can recall.  Thanks for the lesson, Mac.

Lure choices also play an important role when the water color is more similar to creamed coffee than a Blue Hawaiian. I tend to lean toward hard plugs such as MirrOdine XL or Double D that have a lot of gold flash. It probably comes from my youth and throwing spinnerbaits in muddy waters, but I'm a big believer that gold puts off more reflection than silver when the conditions go south. Many of you know that I am a diehard Bass Assassin man, with most of my time casting a 5" rattail. I'll shift to Bass Assassins Turbo Shad paddletail in these conditions and work it more as a swimbait than our traditional jigging of soft plastics. Of course, the MirrOlure Pro Dog and He Dog are my favorite choices for topwater lures when it's muddy. Each of these has their own signature sound on top and I often find the trout may want one or the other on any given day.

Per TPWD, our trout fishery is in great shape, but I will remind the reader that this is based almost wholly on numbers of fish and not quality. "Great shape," is deceiving, considering that it includes trout less than one inch. The truth of the matter is that every bay system in Texas is producing fewer quality trout over the past five years, a fact proven by guys and gals on the water hundreds of days per year. The growth of recreational bay fishing has far exceeded what a daily bag limit of five trout can keep in check, in my opinion. While many fishermen are now practicing catch and release, the old days still prevail when it comes to putting trout in the ice chest.

Croaker sales started in late March last year, and ran into early November on the Upper Laguna. Considering that 99% of the trout caught with this method likely go into the box, you should understand why this long selling season is so alarming to me and others that fight for a quality fishery.

Truth is, though, croaker is not the issue. It's the kill mentality and social media "likes" of most that are utilizing them as bait. I do not see TPWD doing much about it, but the elimination of croaker as bait would eliminate 80% of the guides who likely encourage most of the killing. I believe the trout population, and especially the quality, would multiply by leaps and bounds in a few short years. Not to mention that the traditional croaker fishery would make a comeback without commercial netting for bait sales.