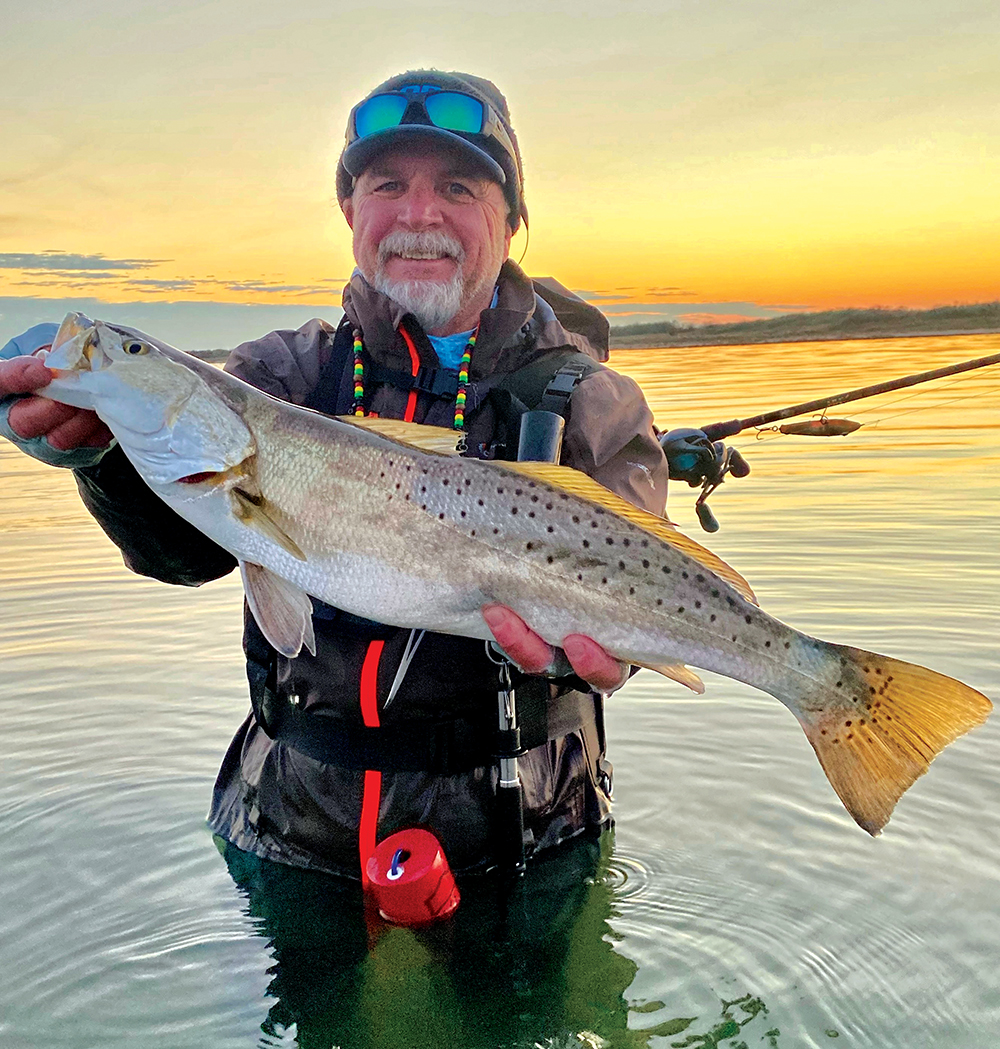 Don Balius of Biloxi drove ten hours to see what Baffin was all about. He found out when this 27-inch speck hit his Fat Boy Pro at sunset. CPR!

Outside right now, temps are in the 40s with sustained north wind at 30 mph, and some rain to insure the misery factor. I have clients in from Mississippi that made a ten-hour trek to fish Baffin, and we are going to make it happen…just delaying till noon for the rain to stop. We had a good first day and I'm trying to salvage the second on a day I would have normally cancelled.  So, to every young buck that thinks this a dream job – Momma said there'd be days like this.

TPWD commissioners just met and voted to change the bag and size limits on speckled trout through August 2023.  To say this is much needed would be a great understatement.  The 17-23" slot along with the 3 fish bag will give a 27% increase in spawning biomass through the next two spawning seasons. Considering all factors (freezes, guide and rec harvest, tournaments, etc.) I was hoping for something tighter (17-20" with 2 fish bag limit for a projected 53% gain in spawning). Aim high, but be willing to settle for a little less.  Whichever way it could have gone, I call a big step in the right direction. Hats off to Coastal Fisheries and the commissioners.

In general, 2022 has started out really good.  I have been pleasantly surprised at the number of solid trout we are catching a year after the freeze.  The giants are in definitely much fewer compared to past years but the 3- to 5-pounders that will be our next generation of trophies are better than expected.  If everyone would do their part to release the majority of what they catch, along with the new regs that should take effect month, the future looks bright.

March is not always the most comfortable month to be on the water but if you are chasing trophy trout in Baffin and the Upper Laguna this is when you want your feet planted in the mud down here. Gorged bellies and heavily laden with roe are what you are going to find on big females when you land them during this windy month.  If your idea of a trophy is based on weight (mine) versus length, now is the time.  Since I began a couple days ago and just now completed this column, I landed a rather skinny 28-incher that weighed 7-pounds.  This fish would hardly be worthy of mention a few years ago but we are fishing in different times and every big catch has a completely new meaning. To say that each one is very special would be another understatement.

Trying to locate the largest trout in the bay, even in the best of times, has always been a challenge, but during March we can count on Mother Nature giving us a nudge in the right direction if we are willing to acknowledge past patterns that typically begin to emerge this month. Grassy shorelines, sandbars and flats are all key hunting grounds for us as the trout have begun to make their first move toward spawning.  I particularly like areas that are windward, or a large flat that can have some decent chop on them. With no evidence other than time on the water, I believe the wind-driven currents keep the freshly deposited roe trapped in the grass, protecting it from predation to some degree.  It seems to me that trout seek these areas and remain there for some time if there is also a reliable food supply.  While the rougher water does its part to protect the eggs, it also gives us a great opportunity to slide in shallow without spooking the large females.  The noisy chop and off-colored water give us a rare chance to get right in the middle of the action, without blowing out the trout, which is much tougher to accomplish on calmer days. These factors along with long, accurate casts to specific points of structure will really increase your chances of catching trophies versus just catching a fish.

When the freeze broke last year I publically stated that I would harvest no trout through 2022.  I have stuck to my guns and my wonderful clients have been there with me every step of the way. God bless y'all!  I would challenge any guide that truly cares about the fishery to do the same.  Lead by example; become a better steward of the bay; and you will be rewarded tenfold. My phone rings daily with new customers that choose to fish with me over others due to my conservative stance and doing what needs to be done.