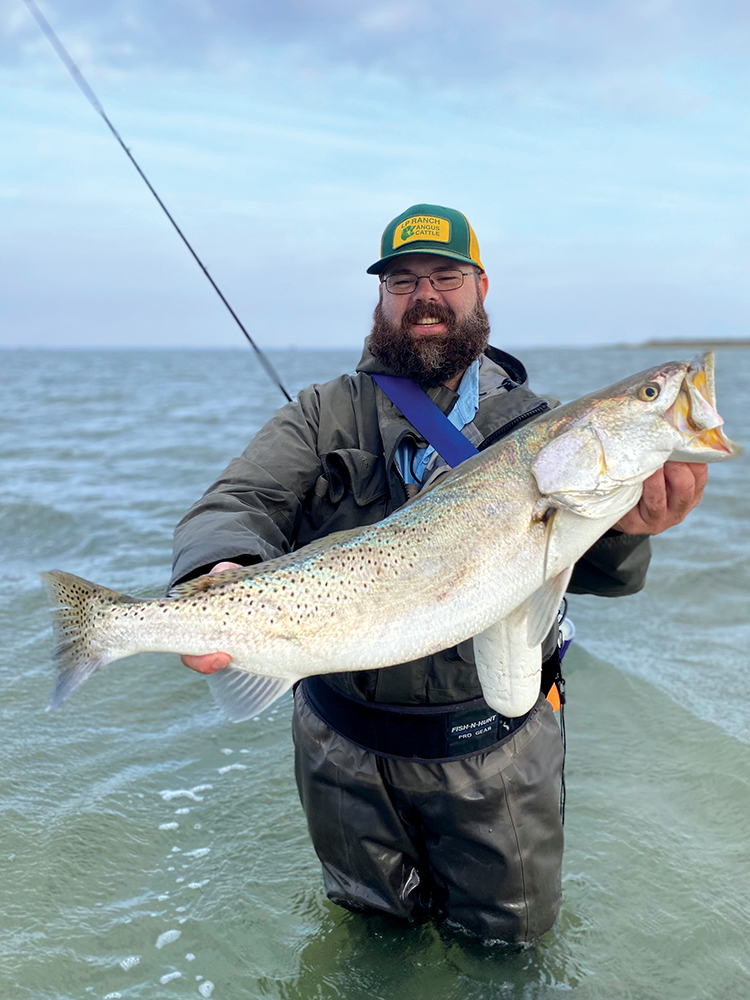 South Texas is alive right now, but could use a big slobbering kiss of rain.  Mother Nature is using up her reserves to put buds and blooms on the King Ranch, quail are whistling for mates while quenching their thirst on morning dew, and the bays are becoming full of life as the spring tide rolls in with new water from the gulf.  May, quite possibly, could be the perfect month.

Thirty-five  years ago I heard tales of trout coming through the Land Cut, a springtime migration of sorts.  I was very green then but the tellers of those tales were old salts that rarely got excited about much. These same men would get giddy as kids at Christmas this time of year and they could track and catch trout from the south end of the Cut all the way into Baffin. A handful of the best guides of that era, now legends, became masters of following this migration and catching more large trout than today's anglers could begin to comprehend. Doug Bird (recently deceased), Johnny Mendleski, Bill Sheka, and Cliff Webb were, and still are, masters of  dropping a trolling motor and casting big topwaters along the edges of the Cut to trick giant trout. This was never my game but I heard the stories many times over as I patiently waited for the trout to break off into Baffin where I could have a better chance of wading for them.

Every year we still see some semblance of that migration but it's commonly known, with regards to trout, that it pales in comparison to those days. Everything is relative in my opinion. What we see coming through now are reduced numbers due to any number of factors; fewer fish overall, pressure to keep such fish, advancements in gear and technology, water quality, and fast boats that make that once long run much shorter.

The migration was at its lowest during the brown tide years. You would hear reports of trout pushing through from the south. At some point they would hit that hard line of brown water in the Cut or near Rocky Slough and everything just stopped. They would make a U-turn back to the greener waters from which they came. Knock on wood, we have healthier water currently and I am looking forward to what will come through on this new springtime tide.

Regardless of the number of trout that may or may not push north, there are other positive attributes of the big tide. One of the two biggest for me is the influx of clean gulf saltwater into Baffin. Honestly, it's like putting a man recovering from a weeklong bender on oxygen and an I.V. It literally rejuvenates the whole bay system in a very short time.

The other biggie for me is new life in the form of baitfish. Mullet, menhaden, pogies, shrimp, etc., will be riding that tide and replenishing the bay with a food supply that becomes diminished through the colder months. After living months on a diet akin to rice and beans, Baffin’s resident fish will soon have a full buffet to gorge on.

I have long thought that May in the Baffin complex is about the peak of catching both numbers and quality. Nearly every sand hole, rock, and bottom contour has potential to hold quality trout, so long as there is some amount of bait present. Furthermore, every lure type that one likes to throw has a place in the wading box and the potential to produce big when it wouldn't in the colder months.

Speaking of that, my box stays close to the same all year, and that includes the Corky. Whoever spread the rumor that Corkys only work in wintertime should have their fishing license taken away. Another lure that I have come to rely on and have tremendous confidence in is the MirrOlure 18MR Heavy Dine. This little guy is just awesome for deep drop-offs and travel routes. I tend to fish it fast to draw reaction strikes, which means it also effective as a fish-finder bait.

In closing, please do your part for the bay and the trout recovery.  We have an opportunity to bring the bays back to quality fishing if we practice catch and release through 2023 and beyond. There are just too many utilizing the resource to think we can keep every legal trout we catch. Be smart, see the big picture, and check the egos at the door. As Jimmy Buffett famously sang, "Treat her like a lady."