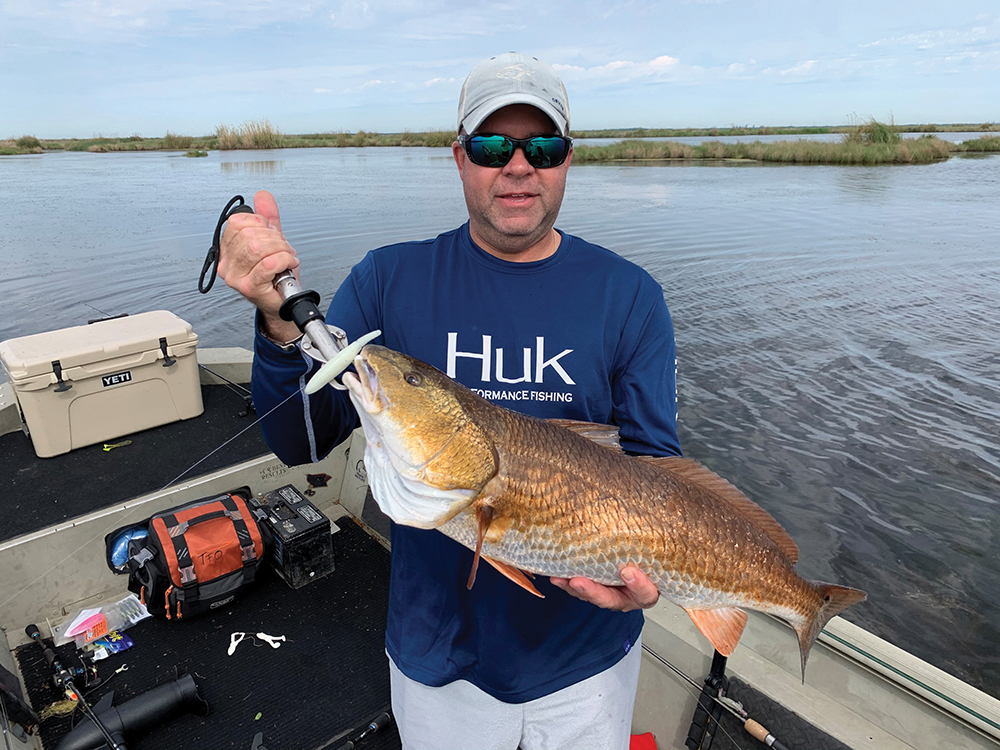 Redfish will run shorelines this month, chasing small shad and anything else they can eat.

You can’t see the forest for the trees is a well-used phrase that I’m sure each of us has not only heard but can completely relate to in some form or fashion. On more than one occasion over the past few weeks my wife and I have laughed while watching different groups of people in places like restaurants become living examples of this age-old phrase. A perfect example is a family of four at a restaurant table for dinner, each with an electronic device in hand, completely oblivious to family members and everything else that is going on around them. Instead of taking in the moment and enjoying the company, they chose to sequester themselves in their little electronic world. What a shame.

Fast forward to your favorite fishing spot and you can almost witness the same thing that happened in the restaurant, only in this scenario we have a fisherman staring intently at his electronics instead of reading the water and other conditions around him. I have just been blown away at how electronically dependent some anglers have become, and it doesn’t appear this trend will slow down anytime soon. Now don’t get me wrong, the latest navigation and depth-scanning technology can be a huge help in certain situations, in fact it’s almost like cheating in some cases. The ridiculously sensitive scanning sonar out there today has elevated many a fisherman’s game to the next level, but it has also weakened them in other areas. The high-tech electronics work magic for offshore anglers as they probe rocks and wrecks while looking for just the right spot for their next cast. Other anglers who key on structure like the guys in Florida who chase snook around docks benefit greatly from being able to see fish before they spend the time to set up on a location. And don’t even get me started on our freshwater brethren, that has gotten to be a completely different world to say the least. I looked at a tournament angler’s boat and all I could do was shake my head. Four separate electronic units, some as big as the television on my living room wall. I don’t know how they have time to read let alone study them all.

Now this is exactly where your run-of-the-mill Texas saltwater fishermen differs from the rest of these folks, electronics on most inshore boats are minimal when compared to their offshore and freshwater counterparts. Most folks who spend their time in the bay rely on a basic unit that has some navigation features like GPS mapping or charts along with depth and temperature indications, that’s it. In all honesty it’s really about all you need as far as technology goes. Folks who frequent the bays spend way more time actually “reading” water than other anglers, especially those glued to screens. Texas middle and lower coast anglers who spend the majority of their time in three feet of water or less, are perfect examples of folks who get it done without all the digital or electronic wizardry. They have learned to actually look for signs of life or variations in water color; functions most electronics are unable to perform in those areas. Obviously sight-fishermen lead the field in reading water and fish behavior and it’s refreshing to see those who are really good at it in their own element. I hate to sound like the old man who screams at clouds or shouts “get off my lawn,” but every now and again you must open your eyes because you could be missing a whole lot of good stuff.

Some of the best signs you’ll ever see cannot be duplicated electronically, set off an alarm, or call your attention to the circumstances at hand. Seeing a big heron stalking intently down a shoreline is more often than not a dead giveaway to finding fish, especially redfish. In the spring when the tides get high and the tiny shad that have just hatched ball up along the shorelines, the flounder will also give away their position as they gorge on the tiny baitfish. Both the sight of a heron along the bank or a flounder busting through the bait are welcome sights that many anglers key in on when they are actually looking for fish instead of the screen. And any discussion of visible keys to finding fish would not be complete without at least a quick mention of slicks, which are perhaps the most unmistakable sign of all. Both the sight and often times smell of a slick will cause just about any saltwater angler who is worth the price of a topwater plug to instantly go on point like a good bird dog. The best way to describe a slick to those who don’t know is it’s a shiny spot on the surface of the water that’s created by trout and reds feeding on oily forage species. You can not only see these oil sheens but you can quite often smell them as well. Some say they smell like watermelon while others liken them to scent of freshly-mown grass. Once you begin to learn the nuances of fishing the source of these slicks you will have a decided advantage over those who haven’t gotten onboard with the concept. Slicks flat out produce fish – put it in your book.

Speaking of producing fish, I had a conversation with Capt. Cody Roesener recently about some new products that debuted last month at the Houston Fishing Show. When Roesener isn’t fishing, he’s working as a manufacturer’s rep with Frontier Sales and Marketing, so it’s always a pleasure to pick his brain. Both Roesener and I use Okuma gear so I was more than anxious to hear about a couple of the new additions to their line. The new RTF rod series (stands for redfish-trout-flounder) look mighty slick is all I can say. Okuma took input from many Texas anglers and incorporated what they learned into these rods and you can tell because they cover the spectrum from wade fishing models to shorter handled designs that are perfect for kayak anglers. Along with the RTF rods Okuma has also introduced two new reels of particular interest to me; the Hakai DT baitcaster and the ITX spinning reel. The Hakai is ridiculously light, weighing in at 5.9 ounces, so wade fishermen will absolutely love it. One special feature on the Hakai that’s noteworthy is the hardened brass main gear that allows this small reel to sport massive drag in the 20-pound range, a real brute for such a small reel. The new ITX Carbon spinning reel is also a great addition to Okuma’s already top-notch lineup of spinning gear. Like the Hakai, the ITX has best in class drag ratings and is noticeably lighter than many comparable reels. I actually picked up a 4000 series in hopes of improving my offshore arsenal for trips to Mexico. All three of these new offerings from Okuma are definitely worth looking into.

Moving forward into May, both Sabine and Calcasieu should become much more angler-friendly as weather patterns will calm and make the open water programs easier to access. Run off from late spring rains that muddied both lakes will hopefully be a thing of the past as prevailing southeast winds will usher in better water from the gulf. Water temps will be conducive for an above average topwater bite so don’t be surprised if you see some of the best fish of the year show up in either locale. May will be one of the nicest months to be on the water as we will soon be staring at summer. Take advantage of the pattern and be sure to take a kid fishing when you get the opportunity.