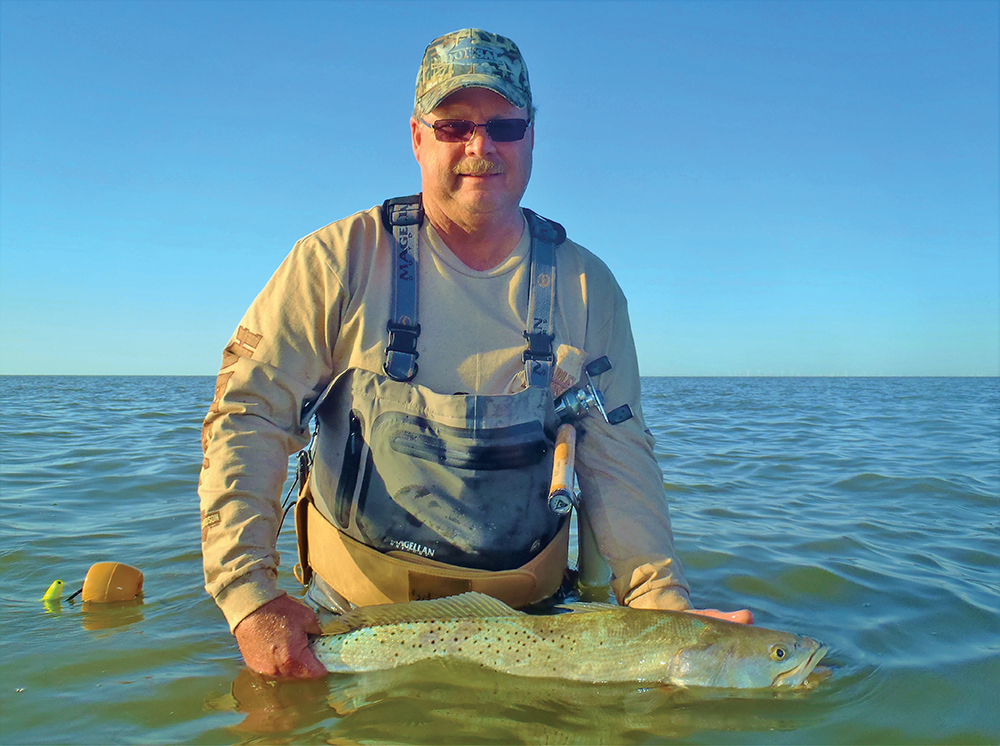 Jerry Honeycutt dangled a soft plastic under a cork to catch this thirty-inch trout in Baffin during the month of May.

The Covid struck Darren Jackson hard and fast. By the time the retired army veteran called 911 to tell someone he felt really sick, he was already almost gone. An ambulance rushed him straight to the hospital's emergency entrance, where nurses whisked him into a crowded ICU.  Two days later, surrounded by strangers, the stubborn soldier perished there, with no family members by his side. His son and daughter-in-law said goodbye to him through a cell phone; they did not know whether he heard them.

The whole sad, sickening scenario hit Darren's grandson Darrell like a cold stone fist. He hated the fact the stupid virus didn't even give his grandfather a chance to stand and fight.  He saw his Pops as a man's man and felt deep love and respect for the warrior in him, despite the fact they hadn't seen much of each other for a decade and a half.

As an adolescent, Darrell spent time with his grandparents on lots of weekends during the school year, and for longer stints during the summers. The elder Jacksons had a place down on Caney Creek, where they'd take their only grandson on fishing trips, to get away from the hard, fast life in the city. They believed boys make better men when they grow up hunting and fishing, experiencing the same kind of communion with nature as their ancestors did.

Darren insisted on wading all the time and always fished with lures. He didn't believe in making it easier for a boy to catch fish by giving him live bait. “People need to learn how to do things the right way from the start,” he said to Darrell's mother, when she wondered aloud if her son wouldn't enjoy fishing more if he didn't have to work so hard to get a bite. Eventually, she had to admit Pops was right; when he hit puberty, the kid could wield a rod with impressive precision, and he usually caught nearly as many fish as his grandfather did.

When wading, the two Jacksons developed a familiar kind of rivalry, each trying to catch more and bigger fish than the other. Darren would never dream of letting his grandson win, and he almost never did. The venerable leader of men did feel proud when he began to perceive some salt pulsing in his grandson's veins, eventually showing respect for him by treating him more like a peer than as someone who needed protection. For a time, the competition helped their relationship evolve positively, building a bond between boy and man.

But time has a way of placing walls between grandfathers and grandsons. Darrell became a star athlete in junior high. During his high school years, he started running the streets in fast cars, chasing girls and playing games, losing his enthusiasm for waking up before daylight to go wadefishing. Inevitably, the most popular student in the school drifted apart from his Pops, who didn't approve of the lifestyle of the young man who would carry his name to the next generation. The military man hated long hair, sissy pants and any attitude which ranks funny business over serious pursuits.

Darrell transitioned from a precocious, carefree teen into a serious student once he went to college, graduating with honors and a bachelor's degree in four years, then parlaying his achievements into a successful career as a producer, in the radio industry. By the time he turned thirty, he'd sown his wild oats and settled down. Married, with his first child on the way, he felt a heavy sense of loss when his grandfather died, instantly regretting the fact he would have no chance to mend fences with Pops, and angry to realize his own child would never know a great-grandfather.

At the deceased Second Lieutenant's memorial service, several uniformed men fervently showered their one-time leader with praise, saying they'd crawl through mud toward the bullets and fall on mines for him. One recalled the fact the platoon leader had turned down promotions to sign up for additional tours of duty. “He had no interest in leaving the jungle to make more money working behind some dumb desk. He refused to give up the brotherhood of the fighting life, once he found it. He was loyal to us, to a fault.”

Through a veil of tears, Darrell watched when a long line of soldiers stood to salute their fallen hero as the ground slowly swallowed his descending casket, once and forever. After he stopped weeping, the grieving man decided to make a trip down to the fish camp on Caney Creek, which had turned into Pops' home after Grandma Sally died. In truth, he didn't know exactly why he wanted to go; he just knew he wanted to spend some time in the place where he made the fondest memories with the one who taught him how to fish.

He found the house in pretty much the same condition as he remembered it. Though it had obviously aged, its walls wore a fresh coat of paint, its wooden floors shined like a dutiful soldier's boots, and everything lay precisely in its place.  Lieutenant Jackson kept his home impeccably tidy, through tireless effort. The dwelling provided clear evidence of his work ethic and his obsessive need to fight entropy by creating order in his surrounding space.

Darrell poured himself a tall drink from the bottle of whiskey he knew he would find in the back right corner of the cabinet, next to the refrigerator. Before he sat down to sip the amber liquid, he walked into the bedroom adjacent to the kitchen, where his grandfather had slept alone for the last few years of his life. Darrell noted the bed was made; its spread hugged the top mattress tightly, without a trace of a wrinkle.

“How does a man who's barely able to breathe take the time and effort to make a bed?” he wondered. Almost by reflex, he opened the top drawer of the chest. There, beside folded white socks, he saw a notebook; he recognized it as similar to ones in which he had seen Pops scribbling notes many times before. This book, like all the others, had the year written in big black letters across its front cover. When Darrell picked up Pops' last fishing log, he found three others under it. In the bottom drawer of the chest, he found about forty more, in four neat stacks, side by side, all similarly labeled, year by year, in descending order.

Darren's organizational plan made it easy for Darrell to find the books which included some of the days he'd fished with his grandfather. Grabbing them, he went back to the kitchen and sat down by the table to read some of the entries, all of which fit the same template, listing the date, time of effort, weather and tide conditions, water and air temperatures, then all the places fished, even the lures they used, and how many fish they caught, by type. At the bottom of each page, old man Jackson had written a comment or two, to capture his most important takeaways from the day.

Didn't take long for Darrell to find his favorite page. It documented a morning they spent wading one of the coves on the south shoreline of East Bay. The young man remembered it well because he caught his first eight-pound trout then, on a bone Top Dog. He noted Pops had taken the time to make more comments than usual to commemorate the day. One related to the conditions. “Checker-board clouds in the sky, typical for a great bite on top. Little Salty caught an 8! I caught more, but he caught bigger. He's finally mastered the timing of the twitching and turning.”

A new fountain of tears flowed through Darrell's eyes and onto his face. He had never heard his Pops refer to him as Little Salty. And the exclamation point after the number 8! It proved his patriarch was proud of him. These facts couldn't erase the lost years and reclaim the space between him and Pops entirely, but they did help soothe the pain. Right then, Darrell knew exactly what to do; he'd rise in the morning and return to the very spot memorialized in the log.

With faint orange lights in the east hinting a new day, Darrell drove Pops' skiff down the south shoreline of East Bay, easily recalling the track to the place. Most likely he imagined it, but it felt like the boat knew the way.  The high tide allowed for pulling the feather-light hull right up to the end of a long spit of land which juts out into the bay, protecting the recesses of the cove from north winds. The dull morning light revealed a narrow trail through the marsh grass.  Retracing his grandfathers' steps, the grandson trudged toward the back corner of the shallow pocket of water.

On the way, Darrell encountered a coyote, face to face, in the pathway. Both he and the wild dog stopped, staring at each other briefly. As if annoyed, the canine snorted and raised its nose high in the air, then dived into the tall grass. The human watched as the animal looped out and around him, eventually returning to the trail. Darrell shrugged, realizing the creature presented no threat, also that it held a legitimate claim to the place.

Beside the calm, cool pond at the end of the path, the bereaved grandson took a moment to stand in silence. The placid surface of the water mirrored the serenity Darrell suddenly felt.  The sun peeked over the horizon, infusing the clear pool with what seemed ethereal light. A feathery east breeze started, tickling the strands beside the cove, whispering a soft melody.  The lost soldier's progeny perceived nature's music as fitting.

At the precise moment a boot cut the water, the coyote howled a long, seemingly mournful song, probably trying to locate its family. The man shed no more tears; instead, he smiled.  Darrell Jackson knew he would start fishing regularly again, also that he would bring his sons and daughters to these places, teach them to fish someday.

And in the realization, he found a road to the closure he craved. The kid who had turned into a man would soon be a father; he gave himself permission to make peace with the way the relationship with his grandfather had ended. While making his first cast, Little Salty internally pledged to use the logs, the memories and a return to the water as the means to preserve Pops' legacy.