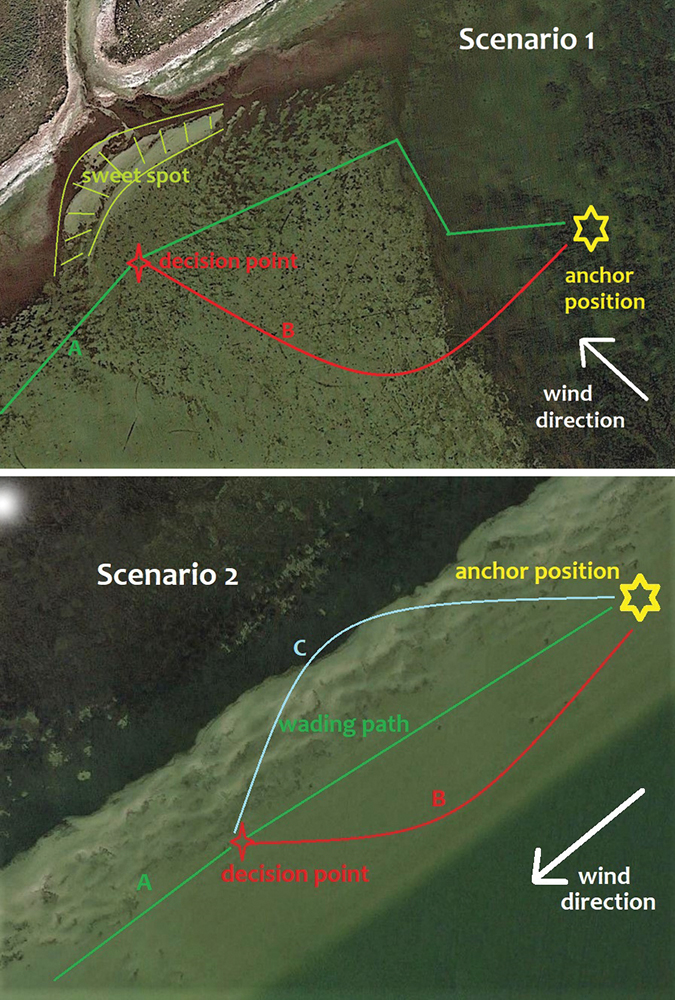 In Part 1 of this related pair of feature articles, I offered an examination of the ways in which hanging a boat in a boathouse limits the scope of an angler's efforts and suggested strategies to use to fight those limitations and elevate productivity. Here, in Part 2, I'll identify a second choice many anglers make when fishing, one which ironically expands the scope of their efforts, but on a scale which generally hampers productivity. Specifically, this scenario develops when anglers choose to fish by wading.

Because I much prefer wading over fishing from a floating platform, I almost always get out of the boat to fish. Over time, I've developed strong opinions about the best ways to execute angling efforts made while walking around in the water. For me, using a fob to control my Power Pole remotely, from distances measuring up to about 75 yards, plays a significant role in some of these strategies. When I intend to fish an area with similar features stretching out for a long distance downwind, I can use the buttons on the fob to manipulate the hydraulic anchor and keep the boat close behind the group as we go.

For me, this fact truly revolutionized the sport. The ability to remotely deploy a mechanical device to hold the boat in place saves me energy in two specific ways. First, it prevents me from repeatedly heaving and retrieving a heavy object over the gunwale. Second, it eliminates the need for walking back to the boat at the end of each wading session. By saving me time and energy, my Power Pole remote fob's buttons allow me to catch more fish.

Unfortunately, current circumstances generally prevent anglers from purchasing hydraulic anchor systems equipped with remotes which work at distances like those possible with my older unit. The fobs sold with modern models of hydraulic anchors work well from the deck of the boat, but fail soon after an angler leaves the craft. The manufacturers of these products design them this way to stop anglers from manipulating the pole at greater distances. This discourages most wading anglers from using the pole to keep the boat close behind them when they're working downwind through a long stretch of water.

Consequently, anglers with newer hydraulic anchors mounted on the sterns of their boats (and those who still deploy conventional anchors) can't proceed using the same strategy I would when leaving the boat with the intention of making a long, downwind wade. Those anglers should acknowledge this fact by working with a completely different type of plan in mind, one I used for many years, before I bought my first boat with a Power Pole attached to the transom. In a way, this plan seems like a foil to the ones recommended in Part 1 of this series.

Anglers who wade away from a boat with no way to control a hydraulic anchor at fairly long distances should make a conscious decision to avoid a common mistake, one which occurs when the catch rate doesn't match expectations, and the angler reaches a point where they realize walking back to the boat will require lost time and energy. Sometimes, the captain reaching this critical point actually turns to look at the boat to contemplate the situation.

I can imagine how this mental conversation sounds. “Hmmm. Boat's pretty far away now, and I ain't really catchin'. Maybe I should head back that way. Aww heck, I see some mullet jumping a little farther down the bank. I'll probably find 'em over yonder.” This internal dialogue feels familiar because I've heard it so many times in the metaphorical auditorium inside my own head!

This does nothing to enhance the enjoyment or productivity of wading efforts. I like to live by simple rules when wading. One of those rules involves NEVER walking through the water without fishing. While moving, I like to keep a lure constantly deployed, to avoid wasting time.  Anglers who choose to walk well away from their boats and then make long, exhausting hikes back to them have broken this useful rule. In order to avoid this common mistake, anglers can modify their strategies in the ways indicated graphically by the two images embedded on the pages with this piece.

The image labeled Scenario 1 depicts a situation in which I would face the same decision as an angler without a far-reaching fob, because the wind direction blows perpendicular to the necessary path of the effort. In this case, we see a sandy/grassy seam lying behind the boat, one which runs toward the shoreline, where grass extends out from the bank a short distance, and a drain allows water to flow back and forth between a tidal lake and the main-bay flat. The green line shows an intelligent path for the angler to take when moving away from the position of the anchored boat, which lies in close proximity to a perceived sweet spot in the area. Anchoring the boat within reach of a such a spot allows for optimal testing of the place.

Wading down the indicated green path would allow an angler to make casts along the seam, then proceed toward the shoreline grass edge, eventually to the area in front of where the drain dumps into the bay. Once the angler's lure has landed and probed the grassy point extending out from the bank on the far side of the mouth of the drain an appropriate number of times, the angler should decide whether to continue on down the shoreline, on the path shown by the green line extending out from the star labeled “decision point,” or circle out and back around to the boat, like the red line shows.

The angler should base this decision on the results earned to this point in the wade. Naturally, in order to make a good decision, one must have a clear idea about what the bite and catch rates should be, given the current conditions. The importance of this critical component in the process of properly making the decision can't be overstated. If the bite and catch rates don't match the expectations for the moment, continuing down the shoreline on foot and hoping they change makes less good sense than circling back to the boat, following a different path, one which will allow for testing new parts of the area.

Only one thing regularly justifies a wading angler walking a great distance from an anchored boat—a fast catch rate. In my career, before I used a Power Pole and/or in situations where I can't use buttons to keep the boat close behind us while we wade, I've wound up hundreds of yards from my boat on a few occasions, all of which involved fast and furious catching for hours on end. In such situations, continuing farther and farther from the boat while walking a path which consistently produces bites at a high rate makes perfect sense, justifying the time lost to retrieve the boat once the catching stops.

But many anglers make the mistake of wading much too far away from the boat when the catch rate runs nil, or nearly so. Most likely, they do so because they start out with unclear expectations about bite and catch rates and stride right through the decision point, hoping something will change farther down the path. Many times, they've done this more than once before they reluctantly turn and make a grueling trek back to the boat.

This can happen easily in a situation like the one depicted in the image labeled Scenario 2. In this case, the wind direction would allow someone like me to use my fob to keep the boat behind the group as we walk down the bar, with the wind on our backs. After proceeding down the bar about 75 yards or so, I'd power the pole up, to allow the boat to drift toward us. At approximately the same point, someone without a working remote should consciously stop and circle back around to the boat, if the bite and catch rates don't measure up to expectations. The red line labeled B on the graphic shows one good choice for working back toward the boat; the blue line labeled C shows another.

The 75 yard estimate serves as a broad generalization. The proper distance (and time) lying between the boat and the point where the angler should make a decision to continue on or circle back around depends on the season, the weather, tidal conditions, moon phase and all other factors which contribute to the bite and catch rates. In only a few circumstances, though, should a wading angler venture more than 75 or 80 yards from the boat, when the bite and catch rates run quite low. These circumstances would occur most often in winter, with negative weather in play, when one expects to grind all day for just a few bites.

In such a specific situation, a captain might justify parking the boat in a place and making a long, slow, meticulous wade through all parts of the area, at times well away from the boat. But in most cases, making a conscious decision to stay closer to the boat while wading makes more sense, unless the catching comes easy. An anchored boat resembles one hanging over a canal in a backyard, because it limits the range of the angler who uses it.

Ironically, the choice to avoid wading far away from the boat does resemble the choice described in Part 1 of this series, since both place a premium on mobility and both acknowledge the way limiting the scope of the effort stifles the potential for productivity in the end.  But some types of mobility prove more useful than others. For wading anglers, taking circuitous paths and repeatedly climbing back onto the boat to use the outboard or trolling motor to move to new locations generally enhances the potential for productivity by limiting the scope of the efforts on a relatively small scale while expanding the scope on a larger one.