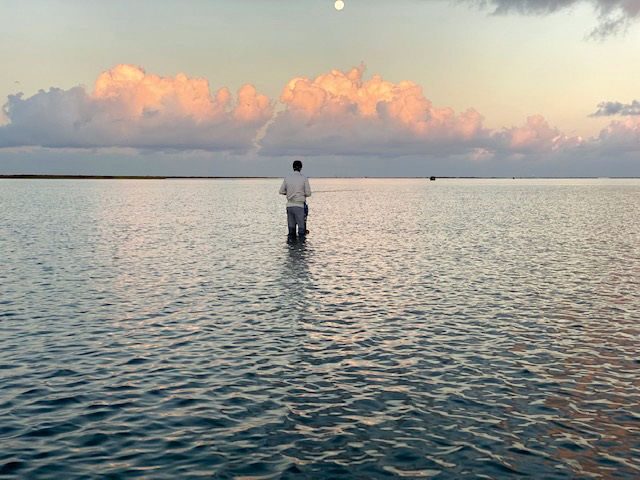 Lowell Odom, owner of Custom Corky and Texas Customs, mapping out the flat.

Even after our first decent cold front we are still experiencing extremely high tides. During the first few days of a new high tide our flats and mangrove islands get pretty sporty. We talked about this in the last article, I believe; if not last month then not too many months back. This new water is highly charged with baitfish and the predators literally go nuts, which means catching can get pretty easy. However, after a week or so of exceptional water levels we see bait concentrations beginning to scatter and the lines or strings of mullet that were so easy to key on are seen less frequently. Now, the scales (no pun intended) are tipped back in favor of the fish and not the anglers.

Baitfish and gamefish will both begin easing away from flooded shorelines and staging in the deeper portions of the flats. I refer to these as swags or bellies. Unless one has had extensive wading experience it might be hard to define such areas. In my early guiding years I would not only pay close attention to depth changes as I waded but I would watch my anglers and compare the depth they were in versus others in the group.

Swags and bellies typically have slightly softer bottom, and from my observations, dead seagrasses will often settle there to form a mushy detritus layer as it decomposes. Mushy bottom can be terrific for winter fishing as it becomes home to a great variety of tiny organisms that mullet feed upon. Just for the record; well, mine at least, mullet go to soft bottoms in winter and trout follow. In my opinion it’s not so much about warmth as we often hear, even though these slightly deeper soft-bottomed areas may well be slightly warmer.

So when the bait lines or strings break up or get too deep for us to observe we have to start mapping our wades. I talk to my clients every day about the importance of discovering the line that the fish are staged along. This line can change from day to day and also by the hour. I believe it depends on the movement and location of the unseen bait. We will get small glimpses of bait activity from time to time or see some other signs that can lead us to the proper area. Birds can be a big help in this endeavor, even birds that are not diving into the water.

I ease into an area and cup my hands around the edges of my glasses and carefully scan the water ahead to discover any signs of fish activity. I try to focus on areas where I can see activity and then concentrate specifically on that smaller location. Local knowledge seldom places me in areas where the most productive bottom structures are not present for the season. This year, with so much rain, we have grass out the kazoo, so I have been forced to use my mapping techniques even more diligently.

It is easier when we are searching in areas of scattered grassbeds, potholes, or scattered shell  because these structures will hold fish looking for ambush points. Large expanses of grass flats with bull tides create the need for mapping. Once I find an area I like, I get my group out of the boat and instruct them to separate by as much as fifty yards…but staying in a fairly straight line. I don’t want track stars and neither do I want anglers who don’t care about their buddies. Stay in line, ease along and pay close attention to depth, any kind of surface activity, the behavior of our avian friends and, of course, the first bite. Even those that didn’t get a bite need to hold the line.

Search out areas with color changes as these could be changes in bottom composition. Hard sand looks white, the mushy stuff looks black, and dead grass often appears reddish. Shell can appear black as well. Some color changes can be stirred by water currents while others can be caused by schools of a variety of species rooting softer bottom. Once bites and fish are detected it’s time to slowly close ranks as we continue to cast at angles out in front of us.

Today was a perfect example of this. Not much bait activity but we had good water color and enough bait over scattered grassbeds to give us the right feel. We stabbed the Power Poles, formed a line, and started the mapping process. Weaving slowly in and out, searching for positive signs as we methodically dissected the area in front. At first it was just that distinct click, but not a hooked fish that stopped me. “Those are trout, nice ones,” I said. Even though no fish had been caught I knew what they were and so did my crew. They shut down and went to work. No bites had been detected outside of the small area we were now working so I felt like we were narrowing the search. This is Mapping 101. We had discovered the exact area holding fish and eliminated the water around it that looked exactly the same but was void of activity.

Over a two-hour period we caught more than a dozen trout and at least as many upper-slot redfish. All the fish came from a small depression/swag/belly, all on individual yet scattered grassbeds, slightly off-colored water and slightly softer bottom than we had encountered elsewhere in our search. Redfish after redfish were caught and released as the broken bottom turned more toward solid grass. Depth did not change, nor did the texture of the bottom, so it was easy to deduce that the depression/swag/belly had been the key. Understand that bait had never been especially visible except the occasional flip or short jump of a mullet. I could however see mullet in the water, along with crabs, shrimp, and pinfish. These three types of food are not visible above the surface very often so we have to be looking “through” the water to see them. They are terrific food sources and main ingredients when trying to map out and locate that invisible line that is holding your gamefish.

The invisible line that you have heard me speak of so emphatically for so many years is truly a huge thing. You cannot advance as an angler until you are able to control this aspect of your game. Leaving the dock we need to wipe the previous day’s canvas clean. Allow the day to develop and let the conditions begin to appear. Add what you observe stroke by stroke as a painter does. By adding all you see when you see it, you’ll develop a really good mental picture of what the day is showing you, one that you’ll use time and time again.

Here’s to John Cowan, Herb Booth, Al Barnes, and John Dearman for capturing the true essence of coastal fishing and hunting. I was fortunate to have fished and hunted with all of these great artists. They painted what they saw and it is beautiful. They gave us paintings of that mental picture of what’s just beneath the surface that should be in every fisherman’s head.

Here’s a question for you. Have you noticed the abundance of needlefish this fall? We are covered up with them, but where they are most concentrated in larger expanses of flats, so are the trout and redfish.

I am not a huge fan of chartreuse on soft plastics due to way it attracts tail-nipping species that inhabit heavy grass. But, needlefish have a greenish hint that almost glows at times. For the past two weeks the MirrOlure Lil John in Chartreuse Ice has been an absolute killer on both trout and reds on heavy grass flats. I have never really been that guy that says color matters, but this color does. It’s crazy how effective they have been for us. The Lil John is as tough a soft plastic as there is and can survive the beating it takes while waiting for the right fish to pick it up.

Wind and Current Across Fish-Holding Structure