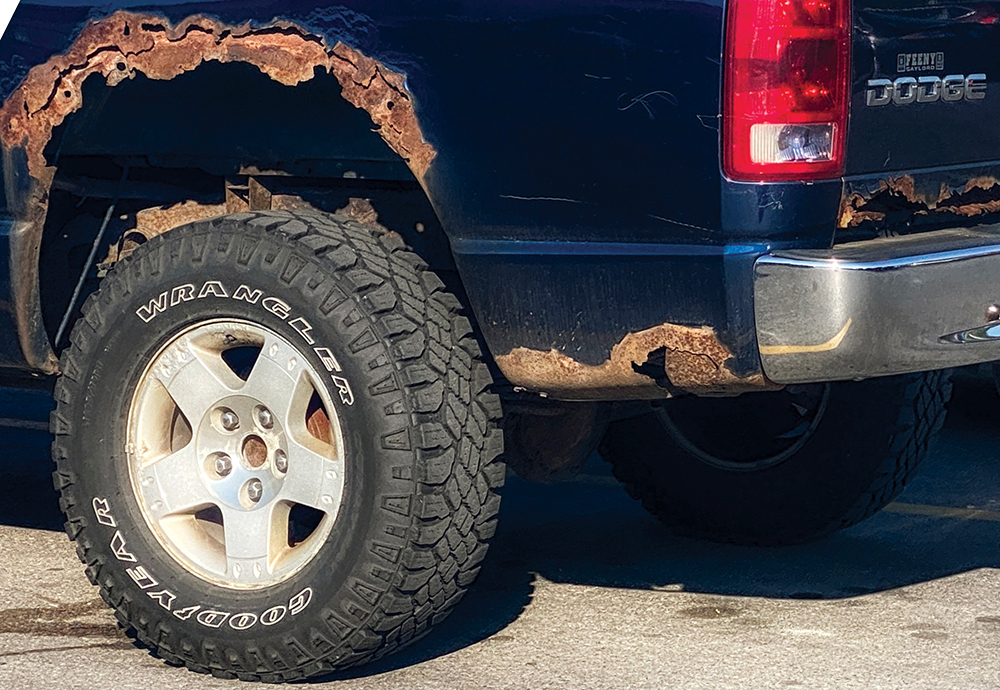 It doesn’t take long for the corrosive elements of the beach to reduce a truck to a rusted pile of junk.

It is no secret that surf fishermen along the Texas coast endure the most toxic and corrosive conditions imaginable. Gear across the board gets thrown into a volume of inevitable decay. Above all, it is our vehicles that take the brunt of the abuse. Whether old or new, the minute your 4WD command center hits the sand the hour glass of life expectancy begins the pour out a little faster. For those who frequent the surf religiously, you may notice your own menacing problems with vehicular rust. The problem here lies with the fact that you metallic chariot is just that... metal. With drastic exposure, the process of rusting will begin to occur soon after. Your truck's structural frame begins to rust and eventually becomes weak. Various brake, fuel, and high pressure lines also become extremely vulnerable to failure. Everything from your axel and drive shafts to your suspension could pose critically unstable and destined for failure over time. But is there any preventative measures for the inevitable? Perhaps there is some help on the horizon!

In short, no. You cannot fully protect susceptible steel against the elements for an extended amount of time without consistent maintenance. Our environment is as hostile as an unexplored hazardous planet. The constant onshore winds are nothing more that humid salt mist. In essence, salt simply affects and eats away at steel. Metal rusting caused by prominent corrosion is very similar to cancer. When it starts, it only spreads more and more. There are too many 'working' parts to your truck that over time can be compromised by corrosion. However, with years of beach experience utilizing new and used vehicles, I think I have found some preventative measures to aid in increasing the longevity of your coastal cruiser.

Since the dawn of beach driving, rust was always a concern. For over half a century along the coast a countless amount of vehicles have met their fate in mere disintegration. Even today scrap remnants of vehicle frames can still be found on various beaches. It was several decades ago when active people realized that they had to somehow protect their cars and trucks. The most widely popular preventative measure has been your traditional rubberized undercoating. Some dealerships offer a service to have this done while most other people have to visit a dedicated 'mom a pop' shop to have this obtained. This undercoating is sprayed onto the frame along with some other places such as control arms and front end, leaf springs and hardware, and other 'obvious' areas. It is a fairly thick coating for what it is. For most people who do not frequent the beach numerous times, this can often be sufficient.

When it comes to surf fishermen though, the term 'numerous' is just a phrase for the norm. For people such as myself, my livelihood is the actual beach. My life and my vehicle literally live on the beach for a copious amount of time each year. In return, my truck absorbs the harmful elements to no end. Over the past 3 decades, I have ran several beach trucks for an average of about 4 years each give or take. My last truck was bought new in which I got several years out of before that even started to crumble. Everything from multiple sets of leaf springs to front end components to even both drive shafts had been replaced. The frame was dissolving along with other essential components. As mentioned, once the process of deterioration begins, it will only get worst and worst faster with time.

My first 2 dedicated outfitted shark fishing trucks (with platforms) were your classic Chevy Suburbans. Both were obtain used. The first one with over 100,000 miles on it, the second from a dealership with 70,000 on it. Both were in fairly good, rust-free condition at time of acquirement. I had taken them to get the traditional undercoating treatment done to them. The first truck got me about 4 years of use before transmission failure and moderate rusting affecting other functionality. The second truck while newer with less mileage, had been heavily affected by corrosion. Even with constant touching up of undercoating on my end the truck started to go downhill after another 4 years. I cannot blame all the failures with this particular vehicle on the beach as it was essentially a 'lemon' from the dealer but I decided to keep it anyway. Nonetheless, rust certainly ate away at this vehicle.

With my next truck, it was a Toyota Tundra bought new off the lot. With this truck I had them undercoat the vehicle as well before even touching the sand. I thought to myself since this was my first brand new vehicle I had ever owned, it should last a while if prepped for disaster right off the bat. In addition, Toyota's are known as dependable workhorses which cater to that versus fancy 'interior electronics and accommodations' such as the other major brands of trucks. But little did I know with as much beach time that I put vehicles through that even this new truck would meet its fate.

The problem with traditional undercoating is while it is a barrier protectant, it does not last long and easily scratches off. Where it scratches or rubs creates a weak point for rust to take advantage. Moreover, companies that apply this traditional undercoating usually get just the 'main' areas such as the frame etc. After a few years with my Toyota, I could get underneath the truck and notice spots that were rusting that were never hit by undercoating. Many were hard to reach spots while others were places no one really thought about protecting. Corrosion had absolutely demolished my truck turning it into a brittle pile of rusted metal. It seemed like I was paying a truck payment in monthly repairs alone due to rusting failures. After 5 years running a truck that I absolutely loved, I was forced to upgrade and replace yet again.

But this time would be different. I would dwell down the rabbit hole of research. I would talk with others and see what has had success in the past. After heavy consideration I had decided to skip the 'professional' services done by someone else and apply my own protective features to the truck. Off the lot, the truck instantly sat at my house to get prepped for undercoating. However, I would not use the traditional formula for my base. I would use boiled linseed oil. The application process is extremely messy but Nick Meyer from Breakaway tackle has used this for years with great success. My plan was to do multiple coats of this over the course of a couple weeks. And that I did.

I would coat my vehicle's metallic structure to the fullest. With the truck jacked up, I started to remove components such as trim and wheel well shields for full access. Areas of frame and suspension and front end I thoroughly coated. I also coated the entire underneath of the bed of the truck along with essential brake/fuel lines etc. If it was a permanent non-moving, non-flammable area it got a meticulous coating. Over the two week period, I sprayed three separate coatings of linseed oil underneath the truck. This created a thick tacky to hard shell of a coating. If the metal is sealed from oxygen, it cannot rust.

But I did not stop there. I even went as far as removing and powder coating the heads of many bolts on the truck. The entire rear tailgate assembly is powdercoated against corrosion. Just when I thought I was done with everything I learned of a new product. Originally, I was going to use a tremendously effective lanolin-based product called Fluid Film to topcoat over the linseed oil and hard to reach spots etc. That was until I learned of a new revolutionary product that just came out on the market a few months ago.

This new product by Blaster is called Surface Shield. It was initially developed to protect fully against corrosion in the north where they use salt on icy roads in the winter. They claim their application protects up to at least two years. Curious with this I did some research and found some test and reviews holding it above anything else on the market. Therefore I tried it. I utilized this product to coat areas from inside the front grill to the back bumper using roughly 6 cans. I can say with the time I have used this on my new Tundra, this product is an absolute winner. While this is also a lanolin-based product like Fluid Film, it does not fully dry but Surface Shield adheres extremely well to metal and other objects and stays that well even exposed to high pressure water. This was proof as I recently was on a cross-country road trip where I drive 500 miles in non-stop monsoon rain... and yet this product still held fully in wet splashed areas.

Preserving ones beach vehicle has always been a timeless mystery. Unless the day comes when every piece of metal on a truck is either stainless steel or aluminum, we will always be seeking the best route to protect our investments. It comes down to the basics - if it can corrode, it will. Protect it at all cost with some sort of protective layer. Don't be afraid to coat various lines or even electrical portions underneath your truck. One last bit of advice is also do NOT use high pressure water for rinsing. Rinse you truck with a light/moderate stream or spray so not to compromise your protective coating or blast sand/salt that would get trapped in other hard to reach areas underneath your truck. Overall, the less water your truck is exposed to period the better. I just wanted to share with you my over-the-top undercoating for my vehicle and perhaps you too can experiment with techniques. If you find a great method you are convinced is ideal, please share!