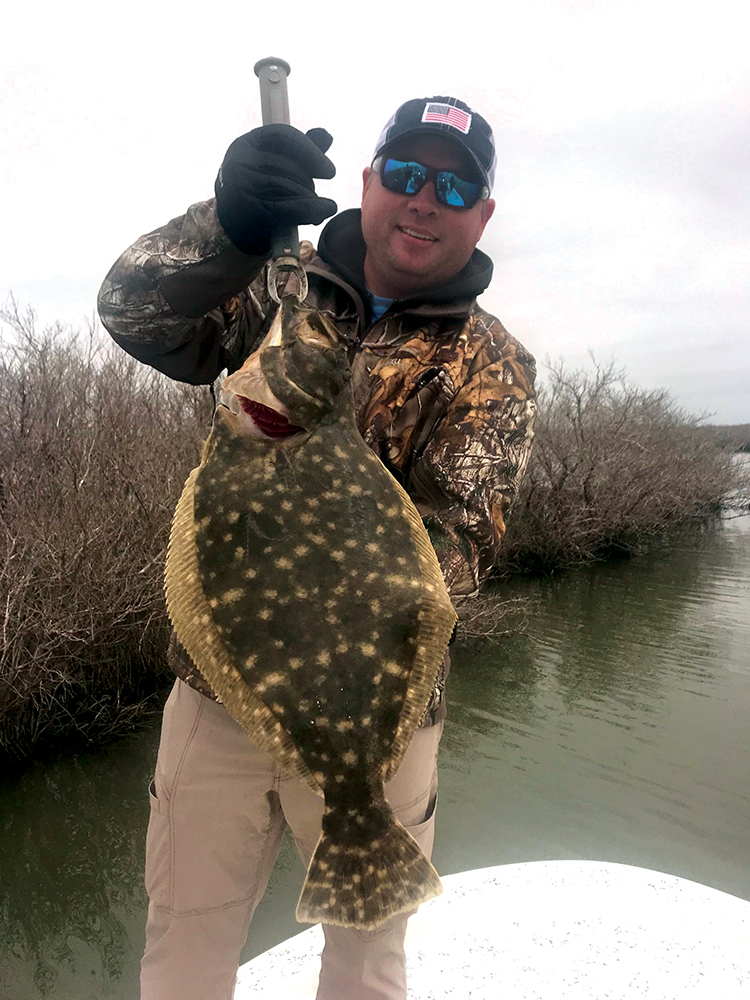 Jeff Kraus lucked into this fine specimen of a flounder.

Happy New Year to all my angling clients and friends. 2022 is special to me as it marks the twentieth anniversary of becoming a full time fishing guide. I remember writing my January article last year, how thankful and optimistic I was to bring in a new year. Little could anybody have guessed the challenges the year would bring. Not only in fishing, but politically, economically, supply shortages, the Covid pandemic, and everything else we’ve had to endure. Lucky for me I have been as busy as ever. My clientele obviously felt a need to get out on the water, enjoy some fishing time, and simply kick back and decompress. I am truly grateful that they seek me out for this recreational opportunity.

Fishing in the POC/Seadrift area this past year has included many challenges. First was the February freeze that put a big hurt on our trout fishery, and then came the rain. Incredible rainfall locally – more than 100 inches – beginning the last week of April and continuing through summer and well into the fall. San Antonio Bay became almost completely fresh from the middle of May until just recently. We never really got the chance to find out just how well the trout population might have compared to years past. Our saving grace recently has been the reopening of Cedar Bayou. While Cedar Bayou doesn’t feed directly into San Antonio Bay, it is our closest pass to the gulf. In case you do not remember, Cedar Bayou was reopened in 2014 but its flow declined due to natural siltation during 2016. Hurricane Harvey came in 2017 and closed it almost completely once again. Thankfully the latest re-dredging project completed in late-fall 2021 has restored it to normal flow and fishing in that area has improved significantly.

Late this year San Antonio Bay began trending toward normal salinity levels and the fishing has improved. However, what I am most concerned about is the damage done to our oyster reefs during the six months of near zero salinity. Oysters require at least moderate salinity, without it they will die. Whether or not anglers are aware, oyster reefs are vitally important to the ecology of San Antonio Bay, and the key to the great fishing it has always provided.

Another concern I have for the future of San Antonio Bay is the aggressive harvesting of oysters over the past decade. Galveston and other upper coast bays have traditionally supplied the bulk of the oysters harvested in Texas, but Hurricane Ike in 2008 devastated 80% of the public reefs in that area, bringing harvest closures and a dramatic shift in oystering effort to the middle coast. For the past several years we have seen enormous numbers of oyster boats that traditionally worked upper coast bays, many from Louisiana, coming to San Antonio, Copano, Ayres, Mesquite, and Carlos bays, which are part of our neighboring Aransas Bay System.

Hoping to learn more about the ecology of San Antonio Bay and the dangers of prolonged over-harvesting of oysters, I spoke recently with longtime friend, Capt. RJ Shelly. More than a friend and fellow fishing guide, RJ is a great source of information on these topics. His 25-year career includes a stint with TPWD Coastal Fisheries Division at Port O’Connor and many years as an Environmental Specialist for the Texas Department of State Health Services - Seafood and Aquatic Life Group. Most recently he has been working as the Calhoun County Extension Agent-Coast and Marine Resources. I asked RJ if he believes our reefs are being overharvested this year as well as in the two years prior. He agreed there needs to be a better way to help control the harvest season or we could truly be at risk for losing lots of reefs in the next 10 years. RJ believes it will be at least two years before we see the reefs in San Antonio Bay rebound from the flood of freshwater in 2021, mostly due to the die-off of so many mature oysters and the reduction of spat (oyster seed) being produced. He basically described it as a full year with very few juvenile oysters being produced and this is a great concern to me.

Stay tuned for my next article. I want to give you more of my conversation with RJ along with some insight from my husband, Gary Gray, who harvested oysters commercially with his father, Neal Gray, back in the early 1980s. So, if this is of interest to you, look for the continuation of this discussion coming soon.