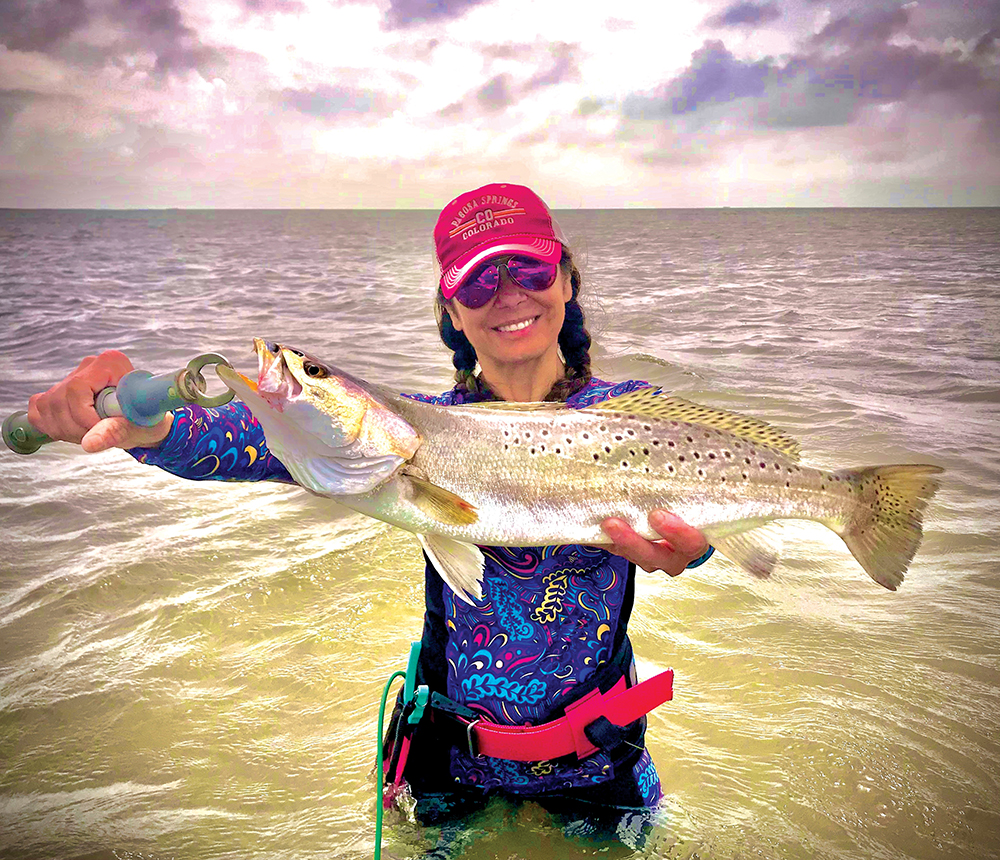 Marina Marshall doing what she does best - catching and releasing big fish.

May and June gave us plentiful rainfall along the middle coast. All bays benefit from local runoff and river inflows to help balance salinity and it certainly looks as though the rains came just in time, given that winter and early-spring were uncharacteristically dry. The entire ecosystem thrives when salinity runs in the moderate range and this is especially important this year, following the February freeze.

Calmer winds in July open lots of doors for coastal anglers. We are now able to pick and choose areas to fish without worry of nasty, gusting winds that can make boating unsafe and churn the water to muddy foam. Not only do the winds tend to be calm but the direction will be primarily southeast. The possibility of a summer storm would probably be the only exception, and even then for a relatively short time.

Shoreline bottom composition in West Matagorda, Espiritu Santo and San Antonio bays is mostly hard sand with patches of grass and deeper guts that are great for wade-fishing. San Antonio Bay also has some of the best producing mid-bay oyster reefs. Fish will migrate to mid-bay reefs this time of year seeking not only a good food source but also deeper, cooler water. Summer breezes help keep the water in these less-protected areas more aerated.

As of late, wading deep or anchoring on dropoffs adjacent to deeper water have been the key to catching. I am not a huge fan of wading more than waist deep but that seems to be what it takes to get into a solid bite lately. Holding steady when you find a decent bite is imperative to staying in the fish. I watch too many anglers unknowingly walk forward as they reel in a fish. After catching a few the angler has inadvertently wandered into the area where he first found them and the bite shuts down. This can be a real headache if it happens on a day when it took hours to find steady action…only to lose it shortly thereafter.

Surf fishing has really turned on in the Port O’Connor area but it is not uncommon to have to travel a good distance east or west of Pass Cavallo to find a good bite. Keying on feeding birds, active bait, and pelicans – diving or just sitting on the sand – can point the way. Speckled trout can be found feeding between the first and second guts with redfish hanging out in the first gut next to the shoreline. Soft plastics and topwaters have both been effective and I definitely recommend a short length of 20-pound leader to guard against aggressive, toothy critters you are likely to encounter out there.

If you are wading the surf I recommend a long stringer such as ForEverlast’s 15-foot G2 Pro Stringer. Do not tie it to yourself or your belt…just in case a shark decides to grab it. A better method is to slip the spike into the sheath on your wade belt so it can pop free easily in an emergency.  And don’t even think of wading the surf without protective footwear. There are lots of stingrays in the surf and I personally never leave my boat without my ForEverlast Ray Guard Wading Boots. Tall neoprene wading socks help prevent chafing of ankles and calves. If the “full boot” is not your preference, ForEverlast also makes Ray Guard Shields that fit over any wading bootie.

If fishing the surf isn’t your thing, look to the mid-bay reefs in San Antonio Bay. We have made some very respectable catches out there in recent weeks. It often requires some “reef hopping” to find steady action but I can assure you it is worth the hunt. Always take a few minutes to verify bait presence before deciding to fish any of the multitude of reefs out there. Birds wheeling and diving are another great clue but not always a guarantee you’ll be stepping into steady action from fat specks. In our neck of the woods, gulls and terns working right over the reefs are usually reliable. Farther away from the reef can often mean smaller trout, ladyfish, and gafftop.

I don’t think I have to remind you that July is one of our hottest months of the year, so getting a very early start in the morning can make a huge difference between catching or just going fishing!