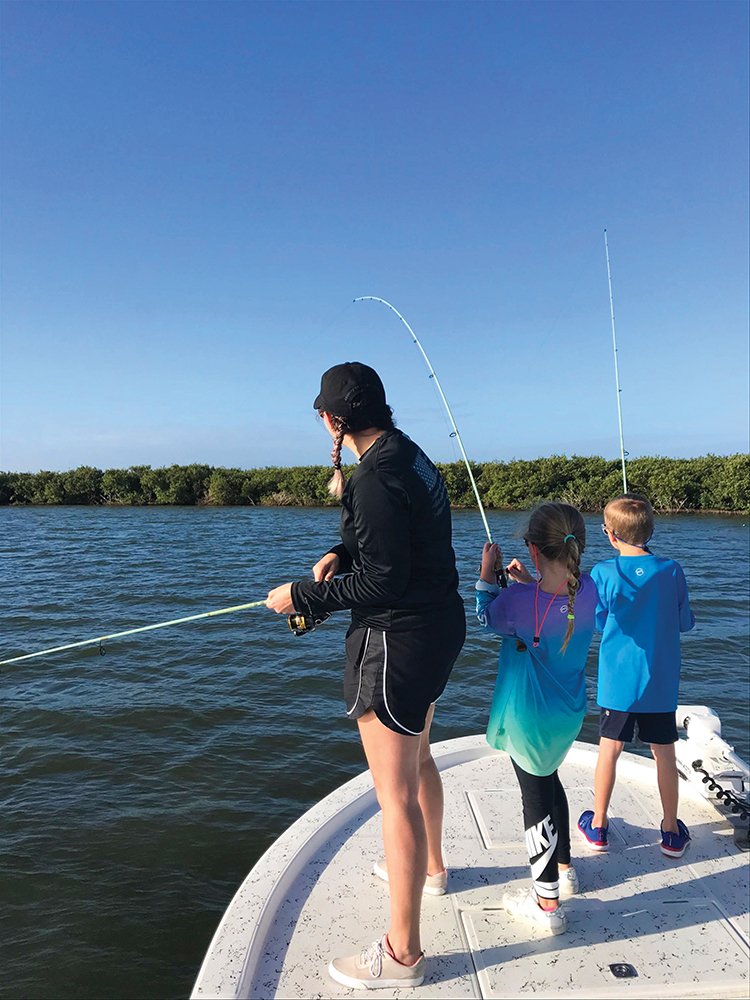 Two weeks out of the month of March we are booked up with family “spring break” trips. I love to see families fishing together!

March is officially the month when spring arrives but Mother Nature can still have a few tricks up her sleeve. Here on the Middle Coast temperatures can range anywhere from 40s to 80s and the wind can be anything from a gentle breeze to gale force. We just have to be prepared to deal with whatever the Ol’ Gal gives us. Tides traditionally begin to rise during March, and since we have been experiencing predominantly lower-than-normal tides this winter, I would like to discuss the change in water levels and how it can affect fishing.

We sometimes hear anglers referring to tide and current as if they were the same but they’re actually quite different. Tide is defined as the vertical movement of water – higher or lower. This is caused by the gravitational pull of the moon and to a lesser extent, the sun. Current refers to horizontal movement of water. Some currents are created by the vertical movement of the tide. When the tide increases in height it moves inshore spilling into the bays and eventually into the back lakes and marshes. The shoreward movement of water creates a tidal current – the incoming tide. The outgoing tide is exactly the reverse of the process – water flows seaward as the tide falls.

Other factors such as weather events can also create current. The variability of early spring weather, strong southerly flows followed by powerful northers, is a great example. Wind-driven currents occur when the friction of wind movement forces water to move ahead of it. When wind and tide are from the same direction much higher and much lower tides can result. Given our location on the Middle Coast, strong north wind pushes water out, creating lower water levels. Some anglers take note of low water levels when launching their boat while others don’t even think to look. Strong southerly winds have the opposite effect.

Another factor that often creates current is barometric pressure. These changes in atmospheric pressure usually happen before and after a cold front or strong summer storm. Low pressure, in general, tends to create higher tides. Quite often the aggressive feeding we see in the face of an approaching winter front or summer storm is caused by swifter current speeds associated with a rapidly falling barometer.

So, if you’re wondering why I’m talking about something as simple as water levels, let me say that I have very few clients who take this into consideration when they are planning their fishing strategies. Types of lures, locations, structure that fish might be using and lure presentations, are almost always discussed while water levels tend to be overlooked.

When fishing with low water levels in back lakes, I usually concentrate my efforts towards the middle rather than tight to the shorelines. When water levels drop dramatically, look for fish to fall off into nearby channels and deeper troughs within the lakes. Why? Because as water levels drop out from under them, baitfish move into deeper water. And we all know that redfish and trout stay in pursuit of the baitfish.

The opposite is true when water levels are higher than normal – think  springtime high. Gamefish are opportunistic feeders and will scatter and begin to search for food in areas that might have been out of play a day or two earlier. This is when we focus our efforts closer to shorelines. Redfish, especially, are known for venturing as far back into marshes and estuaries as the water allows. The fish you will find in these areas are typically feeding very aggressively and are downright fun to target because they are not hesitant to strike whatever you put in front of them.

I personally love it when water levels are super high, enabling me to explore new backcountry ponds and creeks. On the flip side, extremely low water levels have also showed me many things, including hazardous obstructions over the years. Unfortunately, there are old tires, stumps of pilings and other debris that would be submerged with normal water levels. A lot of clients peer at the many marks saved on my GPS screen and think they must be secret honey holes. But honestly, the majority are places to avoid when navigating during low light or foggy conditions.

When putting your game plan together for your next fishing trip, take a minute to observe the water level before leaving the dock. Lots of exposed barnacles and oysters on pier pilings and bulkheads are very useful signs and should tell you whether the shallow water you navigated the days or weeks before will allow you to run those same routes this time.