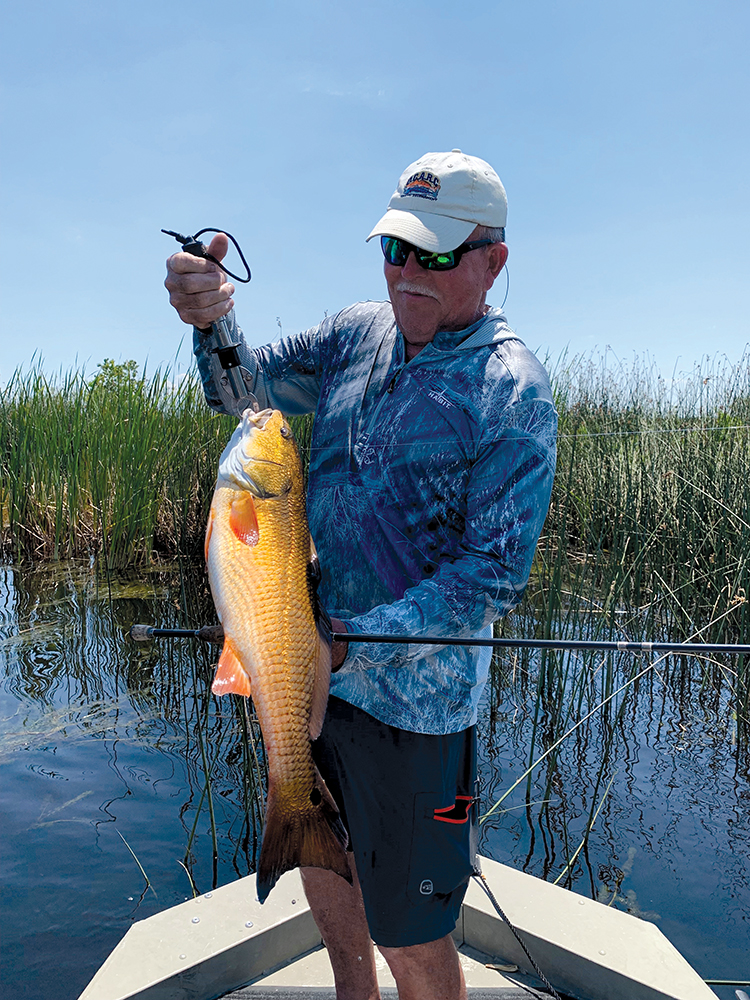 We shared many days on the water and I treasure the memory of each of them.

Each of us can look back through our lives and recall people who made impacts on us, who in their own special way truly shaped the people we became later in life. For me that happened almost thirty years ago when I was so fortunate to make Dickie Colburn my friend.

In my younger years I had a Thursday ritual, I would buy every newspaper I could get my hands on because that was the day the outdoor columns were printed. I bought the Houston Chronicle and Houston Post, the Beaumont Enterprise, the Port Arthur News, the Lake Charles American Press, and never failed to grab the Orange Leader because Dickie Colburn wrote a column in there and it was as close to the gospel as it got. I read all the articles from other writers, but I paid particular attention to every word Dickie wrote. In my eyes he was undisputedly, “the guy.”

I still have many of Dickie’s old columns and I remember the first time he mentioned my name in one of them. I thought I had really made the big time. Funny thing is that after guiding more than twenty-five years I still got the same feeling whenever Dickie mentioned me anywhere. To me he was still, “the guy.”

I remember the first time we fished together; he was incredibly hard to read and I had no idea if he would even care if I fell out of the boat. I found out later he was battling kidney stones, which he did forever, and was just fishing despite the pain he was in because he was that damn tough.

At that particular time I had no idea how fortunate I was that Dickie had taken a shine to me and decided to share some of his incredible knowledge about everything from fishing to life in general. I had been guiding for a less-than-reputable outfit when Dickie approached me and said, “Son, I know your parents and you were brought up better than this. A man is only as good as his word and his actions, don’t let money destroy your credibility.” It wasn’t long after that he began to teach me not only how to handle the business of being a guide but how to handle other things as well, and I will be forever in his debt for all of them.

As my guiding career took off Dickie was quick to remind me that now that I was a new dad I needed to learn that everything in life has its place. Sitting at his kitchen table he said, “Son, if I ever find out that you skipped anything concerning your family, like one of Hunter’s ballgames or a family dinner, you and I will have problems.” And he meant it. I took lessons like that to heart, and I know without a shadow of doubt that he made me a better person for it.

I cannot begin to explain how much he taught me and how far he advanced my learning curve. I know he spent countless hours fishing the Sabine area and knew it as well or better than anyone who ever floated a boat there. There were tons of things he showed me that I probably never would have found on my own. It was like getting all the answers before the teacher ever passed out the exam.

One day while he was schooling me on how to fish deep structure on the river, we anchored near a point that jutted perpendicular from the bank to a depth of 12 or 15 feet. We were throwing live shad on a Carolina rig and he told me there were a bunch of redfish stacked up in the area. After a dozen or so casts with no bite he moved the boat about 50 feet so we could cast to the other side of the point. It was magic. Every cast was met with an emphatic thump followed by a screaming drag. That small correction was the difference between an epic day and a possible zero. The lessons were never ending.

Dickie was incredibly influential in both fresh and saltwater angling circles, having guided both for close to fifty years. Dickie won his share of bass tournaments, piled up more crappie than you could see over, and helped revolutionize the whacky worm technique with the advent of the Crème Scoundrel worm. On the saltwater side he caught a “bazillion” (his favorite word to describe many) speckled trout and redfish, but his proficiency in catching flounder and the way he did it put him over the top.

Early on in our friendship he said, “A man can make a great living with a six and a half foot spinning rod,” and that’s exactly what he did. Dickie loved to throw Gitzit tube jigs with a tiny piece of shrimp on the tip of the hook. He was an absolute flounder vacuum with that spinning rod and light line.

Before the bad run of big hurricanes; Rita, Ike, and all that followed, Dickie could tell you where just about every patch of shell on Sabine was located and how to fish them. There was the time he was pre-fishing for one of the old Troutmaster Tournaments with Jim Franklin when he caught his best trout ever, and had no idea just how big it really was. Dickie and Jim were wading and were not keeping fish in preparation for the tournament, plus they were a good distance from the boat when the fish was caught. With no way to measure the length and girth of the fish except pieces of monofilament line, Dickie stuck them in his pocket and continued fishing. Back at the boat they took their measurements and plugged them into the IGFA formula and learned that his trout was well over twelve pounds. True to form, Dickie was unfazed.

There was also the great run on striped bass we had going on in the early 2000s and nobody was more excited to catch them than Dickie. He had enjoyed them on Toledo Bend and when we started catching them regularly on the Sabine River he was in heaven. One foggy morning while fishing solo he caught an absolute giant fish on a Chug Bug that weighed 36 pounds! Easily the biggest striper anyone in the area had ever heard of, much less seen. Dickie released that fish to fight another day and went on to look for the next one, the same as he’d done a million times.

Dickie took great pride in teaching the sport of fishing to kids and beginners; he greatly enjoyed introducing people to the sport. Forever he told me to always remember as a guide it was, “your job to make this a special day for your client,” because the next day they would back at work while we were still on the water.

Dickie also preached the fact that all you have is your name and your integrity; to never knowingly sell out to a product or sponsor that you do not truly believe in. Dickie’s words are still rules that I try to live by as well as run my business.

On October 27, 2021, my good friend Dickie Colburn passed away in an automobile accident, and the news hit me like a ton of bricks. We’d had a conversation a couple of days earlier and shared fishing reports like we so often did. I can honestly say fishing for me has been a little different since he passed away. I will truly miss comparing notes and sharing stories with the guy who was not only my mentor and friend, but someone I considered close enough to be family.

Dickie was high on my list of people I never wanted to disappoint and I hope to continue along that path. I know my friend is up in Heaven where the fish are plentiful and the weather always cooperates. I am thankful to have had him in my life but I would be lying if I said I didn’t miss him terribly.

Rest in peace my friend!