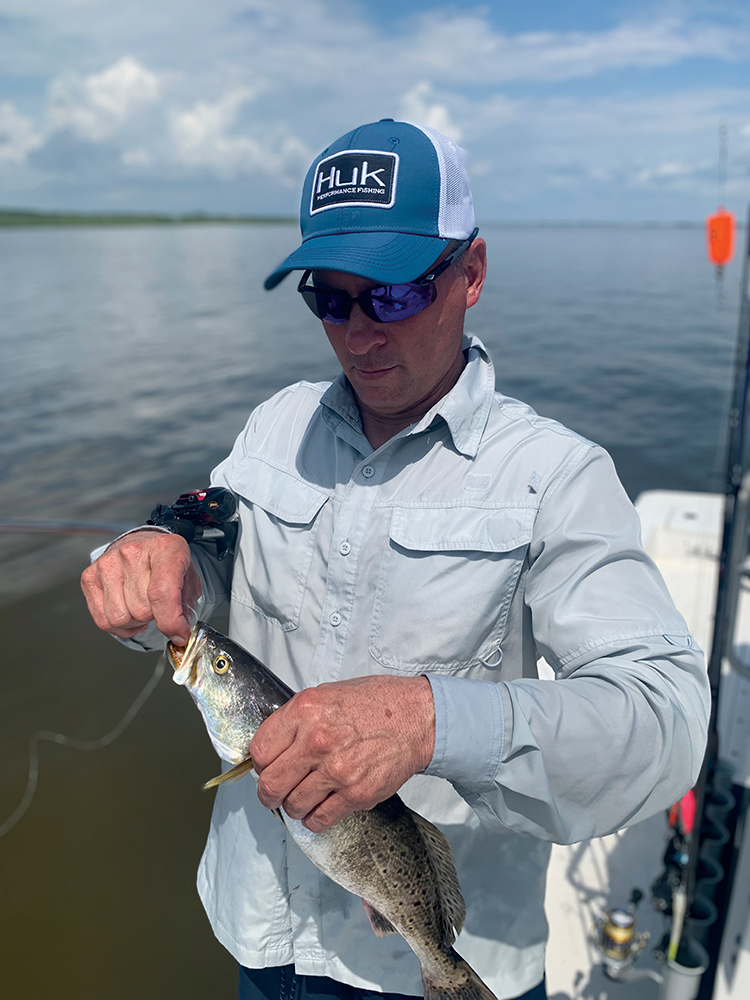 John Lognion prepares to remove a hook from a solid trout caught under the birds.

I would bet a sizeable sum of money that if most saltwater anglers, especially TSFMag readers, were asked to describe what a picture perfect fishing scenario looks like, I could easily describe it before they even started. The classic thigh-deep flat with clear green water dotted with potholes and very defined grass edges. Or perhaps an even shallower flat with a little less grass so visibility would be at a maximum in order to see cruising fish or even a few tailing reds. These are the images that are continually portrayed to us but just how many of us actually get to experience those scenarios on a regular basis? My guess is that it’s far fewer than most think and in all reality only a small percentage of anglers actually ever get to experience them. In fact, instead of stepping into a “coastal version” of a Norman Rockwell painting, most of the fishing community actually looks for the “next best option.”

I’ll be the first to admit that at times I am ridiculously jealous of my friends on the middle and lower coast. I’m just like the average guy who sees all the videos and pictures on social media depicting the perfect conditions that many anglers would kill to have. The one that gets me the most are when its blowing 20-25 mph in a video and it looks like barely a ripple because the water that’s being fished is so shallow. Take the same conditions on the upper coast and you need to have the Coast Guard on speed dial to be sure you can get back to the dock. I would love to have that type of environment to fish in but the upper coast is a different animal, not worse, just different.

On my home waters of Sabine and Calcasieu, the conditions are far from the classic scenario that was described earlier, in fact its almost 180 degrees different. Basically we have deeper and dirtier water with little to no grass and very little sand, so even when the water is clear it looks muddy due to lack of contrast. The option to wade-fish grass flats with potholes turns into drifting scattered shell along muddy bottoms. Although the patterns differ so greatly from venues farther to the south we make it work despite the challenges.

Speaking of patterns, the heat has finally set in on us and the predictable summer patterns are now in full swing. One particular pattern that draws attention on upper coast venues, especially Sabine, is chasing flocks of gulls and terns that feed over schooling speckled trout and redfish. For some reason the schooling activity seems to be more consistent for keeper-sized fish on upper coast bays compared to those farther south. In fact, many guides in places like Matagorda won’t even stop and fish under the birds because the catch to keeper ratio is decidedly not in their favor. A flock of working gulls on Sabine or Calcasieu could mean a school of fish pushing twenty inches or better, so we never pass up that opportunity. I have even seen speckled trout over eight pounds caught under the birds. So, as you can easily imagine, if I have any say in the matter we will always make a stop and investigate.

Fishing under the birds is not foolproof by any means and it does have its drawbacks – so be prepared. If you have a crowd in your boat be sure to position yourself where everyone is casting out of the same side in order to minimize risk of hooking one another. Also, using single-hooked lures, such as soft plastics on a jighead, with the barb pinched down is preferred. The single hook is much easier to deal with in both a crowd or during a frenzy when the fish are active. Nothing is more annoying than digging hooks out of a landing net or each other when you could be catching fish instead.

Another unwanted hazard that usually comes with chasing fish under the birds is inevitably catching a catfish, usually a gafftop or sometimes a hardhead. Take great caution when landing and unhooking these fish as they will flat ruin your day if you get stuck with one of their fins. Be sure to clean any wound thoroughly and apply proper first aid, especially with the threat of both infection and potentially the vibrio virus.

If for some reason the birds are uncooperative, another pattern that draws plenty of attention during the summer is fishing structure. On top of the list of pieces of structure has to be the jetties, hands down. The jetty systems are fish magnets and can provide some outstanding fishing when conditions are right. Tide changes are without a doubt the key to probing the jetty as they are usually the first places in the lake or bay to feel the influence of the moving water. A good tide change right before first light is one of my favorite times to be on the rocks with a big topwater or swimbait. Casting parallel to the rocks tends to produce better but a perpendicular presentation will also work well, especially when throwing jigs and allowing them to bump the rocks all the way down.

Perhaps one of the most overlooked pieces of structure on either Sabine or Calcasieu are the shell pads that surround many of the well heads in each bay. Many anglers never even attempt to look for these hidden gems much less fish them. I was introduced to this pattern years ago by good friend Jim Leavelle one day while we fished Trinity Bay and I am a believer in the technique.

Just because you may not have the picture perfect set up doesn’t mean you can’t pattern and find fish on your own water. There are plenty of options out there as long as you are willing to think outside the box and put in the time to get it figured out. Once you run across one of these new unexplored areas and begin to have some success it will motivate you to find more areas which in turn will make your time on the water that much more productive.