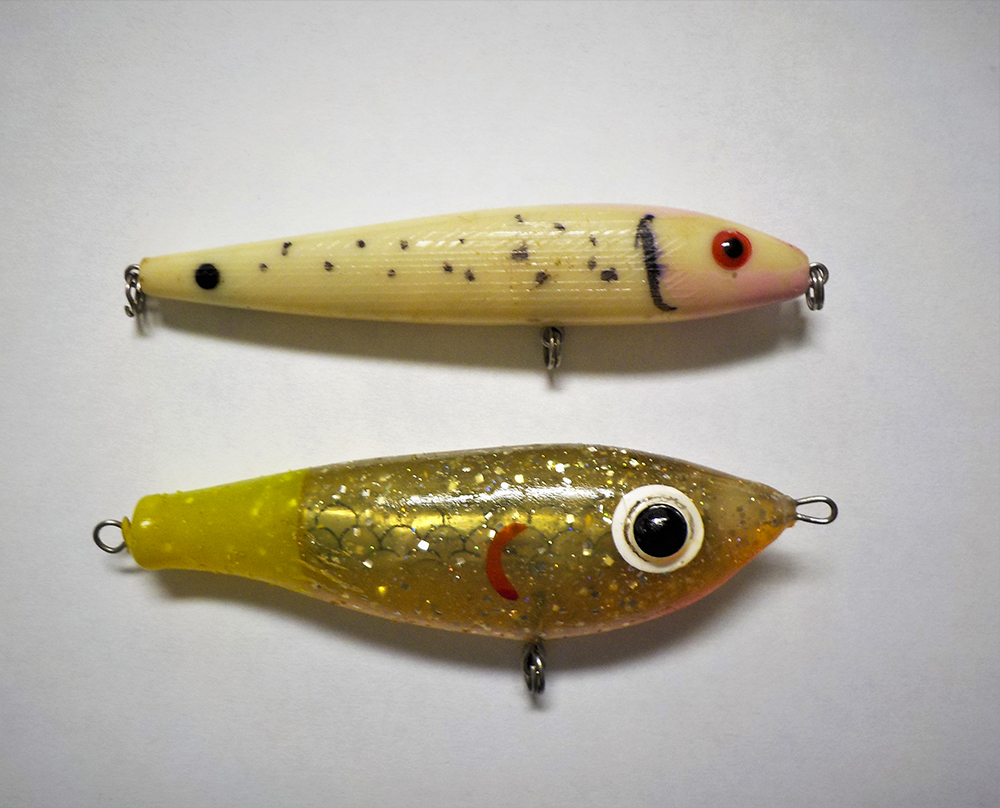 In March, the weather along the Texas coast has both predictable and unpredictable aspects. In an average year, windy conditions prevail during this transitional time. Early in the month, cold fronts regularly sweep across the state, sustaining winter's grip, but by month's end, balmy onshore breezes prevail, making way for the birth of spring. Anglers who best cope with the variability and inherent extremity of the situations presented by March weather generally do so by stepping out of their comfort zones.

Three poignant March fishing trips I made in years gone by emphasize the truth of the previous statement. Each involves a quest to catch bigger than average trout, and each includes conscious decisions on my part to do things a bit differently than others might, or even than I myself might, at another time of year. When chasing big trout through the doorstep of spring, tweaking the specifics of location, lure choice and strategy can increase chances for success.

This definitely proved true on March 22, 1997, when I caught several big trout in the back east corner of Panther Lake, in San Antonio Bay. I and two friends had camped overnight on the shell ridge at Panther Point to fish the area. Back in those days, few people ventured into those portions of the Coastal Bend waterways, so we shared the place mostly with coons and coyotes. One of my companions chose to wade right off his cot and into the water fronting the point when daylight came, fishing the subtle depression between the sand and inner portions of Panther Reef.

I decided to push things toward the fringe, steering my 18-foot Kenner into Panther Lake, parking it near the entrance and rowing into the back corner on my kayak. While the sun sprinkled pink and orange lights on the clouds, I managed to catch five trout between 21 and 25.5 inches, before 6:45 a.m.. All these fish bit topwaters, specifically a clear 95M MirrOlure with a blue head.

The slender, slight plug resembles a large glass minnow. I'd seen massive schools of minnows just about the same size and shape as the little lure swimming in the shallows in front of our tents. In addition to the bigger trout, I caught a bunch of other solid keepers and a handful of slot reds, all of which slurped the tiny topwater from the surface like candy. To this day, the events rank high on my list of favorite memories etched by a topwater bite.

When I returned to camp after the bite died down, I learned my friend had caught more trout than I, but most of his failed to reach the fifteen-inch mark, the biggest about 20 inches. On his favorite lure, a 51M MirrOlure, which he worked as deftly as anyone I've ever seen, using rhythmic pulses with his rodtip, he caught about 40 trout over sand and scattered shell, close to the point. Turned out my willingness to head into the shallows, away from the area in which we usually fished, and to tie on a lure we didn't normally use, one specifically suited for the terrain and time, allowed me to catch bigger trout than my more experienced friend.

Normally, pushing things to the fringe with the goal of catching big trout dictates making the effort in the some of the shallowest water in the area, which consequently requires adjustments to basic habits related to strategy and lure choice. The attributes of some lures make them unsuitable for fishing skinny water. Certainly, fast-sinking twitch baits, large noisy topwaters, soft plastics on heavy jigheads and deep-diving crankbaits won't work well to draw strikes from monster trout in water barely deep enough to cover their backs. Some of these lures can't even be retrieved in such places without snagging repeatedly on the bottom.  Others create a ruckus more likely to scare a sow trout than to urge her to take a swipe.

Floating Paul Brown Fat Boys, on the other hand, perform beautifully in places where a skinny layer of water covers the bottom of a bay, like the shallows on the crown in the North Badlands, in Baffin. There, I used a pearl/chartreuse floating Fat Boy to catch a 9.25 pound trout on March 1, 2008, making conscious decisions similar to the ones I'd made over a decade earlier in a completely different body of water, largely for the same reasons. I knew these choices increased the chances I and my customers would catch one or more big trout.

Because a floating Fat Boy sinks extremely slowly, one can work it at an appealing speed over a grassy bottom covered by fifteen inches water or less. Since the lure does not rattle, it slithers through the shallows with supreme stealth, making it more attractive than a clanking Super Spook or pinging She Dog, at least some of the time. Surely, when a fish (including a monster trout) hunts actively, in hyper-feeding mode, it will track down and attack a noisy plug, even in super shallow water. But what about the other 90% of the time? Quieter lures work better on skinny flats then.

Executing effective presentations with floating Paul Brown Lures takes practice and patience; some folks master their use quickly, while others struggle mightily to earn even a minimal level of confidence with them. Basically, effective methods with these soft plastic twitchbaits resemble those used with conventional topwaters, requiring rhythmic twitches with the rod tip while controlling slack with slow turns on the reel handle. The willingness to deploy these lures in places like the vast flats of the North Badlands sometimes pays high dividends to committed anglers.

Commitment to this drill means more than just acceptance of the need to tweak lure choice away from accepted norms; it also requires one to walk well away from the boat through terrain much better suited for turtles and trout than human beings. On the day I caught the 9.25, I and my customers made two long treks through mooshy bottom into remote portions of the flat, returning to the boat on foot. I had no Power Pole back then, but even with the one attached to the stern of my Haynie today, and the fob I carry on a lanyard around my neck, such a drill remains necessary, as the boat won't float into the areas where we found our fish.

My customers didn't catch a big trout that day; they caught about 20 slot reds instead. This predictable outcome dissuades some folks from fishing the pattern. Culling through lots of reds to catch a few monster trout becomes part of the game in this month when winter dies and spring arrives. After all, these flats typically hold many more keeper reds than jumbo trout. Folks without high levels of motivation and patience often find the action more appealing in deeper water, where they can throw soft plastics and/or topwaters and catch greater numbers of smaller trout.

In so many cases, whether in the month of March or at some other time of year, targeting trophy trout necessitates a move into water shallow enough to remove anglers from their comfort zones. The events of March 31, 2015 reinforce the truth of the previous statement in a most satisfying way. On the warm, windy day, I struggled to find a productive pattern.  Brown tide and strong winds make a mess of things quickly, and this day came at the end of a long, blustery spell during an outbreak of what I call “snot water.”

Trips made over recent days and weeks had revealed a maddening trend. I'd pull up to a place and we'd jump out and catch a trout or two right away. I'd think to myself, “Finally, something to work with.” But, over and over again, the early action had no staying power, and we'd fish for an hour or more without another strike. Eventually, we'd load back onto the boat, go somewhere else, hop out and repeat the events.

On the memorable occasion, I parked the boat just north of the curving sand bar at the south edge of Yarbrough Flats and directed the group to wade north, where a vast meadow of scattered grass and potholes provided plenty of targets, in water about waist-deep. We'd already discovered the best way to earn strikes that day, by dangling a soft plastic under a cork. I jumped out and caught a 23-inch trout on the second or third cast. Moments later, a customer caught a similar fish. Bound and determined to escape the pattern of quick catching followed by an hour or more of dead casts, I decided to walk away from the relative comfort of the depths and into the shallows closer to Baldy, a famous sand bar in this part of The Lagoon.

I found lots of frantic mullet jumping in shin-deep water surrounding sandy humps on the otherwise muddy flat. I strongly suspected big trout lurked within range, but the first bite didn't come for about half an hour. When my chartreuse cork disappeared, I could tell I had a big fish. I waved my customers into the area while I fought the trout, which turned out to stretch the tape to 30 inches and weigh over 8 pounds. My next bite took a good while to earn as well, but the second trout weighed 10 pounds, and measured more than 31 inches. My customer caught a jumbo speck a short time later, and over the next two days, I and my people caught a couple more 30-inchers.

I'm not a big fan of the cork and the jig, since fishing it requires maintaining a vigil on the strike indicator. I'd rather fish by feel, and look around while I'm working my lure. But catching trout of such extreme dimensions makes commitment to the use of the method much easier.  A willingness to move toward the fringes, out of comfort zones, often pays off big in this month which contains both a beginning and an end. Commitment to border tactics starts with a genuine desire to catch bigger trout and ends with a willingness to match aspects of the effort with the needs of the place and time in ways which improve the odds for catching.