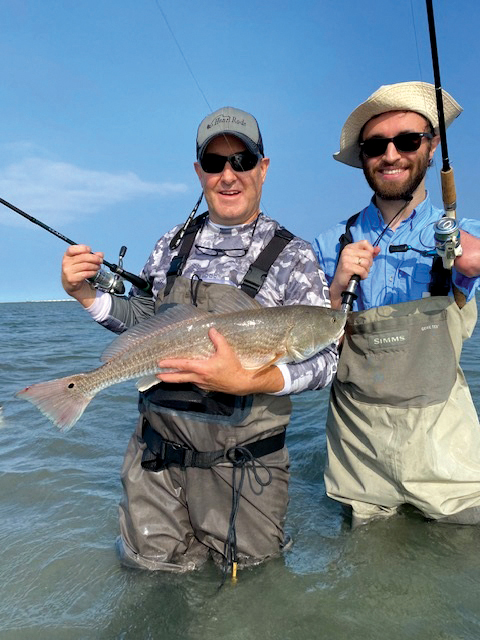 We are going to talk this month about a few critical aspects of fishing large expanses of grass flats. The February freeze and fish kill has me focusing more on redfish versus trout, although my stubborn nature leads me to spending a few hours each morning running shorelines and looking for signs that trout might be present. I try running as far offshore as possible of areas where we might expect the fish to be holding so we don’t spook them. My trout bite is currently very spotty but I am still seeing a good representation of age classes that survived. Trout are still in small areas where current is providing easier access to feeding. Look to smaller areas of structure for the best results. I praise the efforts of all anglers practicing catch and release of the trout they are catching. This effort will be rewarded in a quicker recovery of the fishery.

I have been spending most days wading large areas of grass and sand flats. Luckily I have a lot of this in my home waters to accommodate my groups of three to five anglers, where we can spread out in relatively the same water depth and same or similar bottom structure. Equal water for all in the group can be a luxury we do not always have in wade fishing.

A big part of my day is evaluating client’s fishing and wading skills and putting them in areas where they can catch fish and not struggle constantly with difficult bottom conditions. This is truly one of the most critical parts of my job, a part that typically goes unmentioned by me. The way I see it, my job is to put anglers in the best areas for their abilities and to get them safely to and from the fishing grounds. Pretty simple.

Our shallow grass flats are home to all the gamefish species as well as countless other marine creatures. It is amazing what we will discover if we are paying attention as we wade. I saw a squid with a small shrimp in its grasp last week. My iPhone is waterproof, they tell me, but I aborted  the underwater photo-op as quickly as I thought of it…just to be safe.

Our flats are year ‘round homes to both trout and reds although trout seem more likely to leave from time to time; reds being more predictable flats animals. With higher than normal tides and seasonally strong winds the flats can be angler’s best option. Since Hurricane Harvey in 2017 much of our grass flats areas now have slightly improved bottoms. It’s still way softer than our outside shorelines on average but the storm’s tidal surge and strong winds did actually scour much of the sediment that caused them to be much tougher to wade years ago.

Bottom structure on the flats is predictable the majority of the time. We hear a lot about potholes, but not all potholes have sandy bottoms. Potholes are generally formed in areas where grass does not grow. Some have hard sand bottom others have softer bottom. It is a given that potholes absent of grass are more easily seen than potholes with bottoms covered in shorter-leafed grass, although all should be considered viable targets. Serious anglers try to discover where the bites are coming from and then focus their attention to those specific areas. It’s patterning in its most basic form.

You have to pay attention to every cast and the location of the lure in relation to bottom structure at all times. As we wade across the flat it is imperative that we pay attention to what we are seeing below the surface. See the tiny flickers and glints of gold and silver in the grass? That’s pinfish flashing an “Eat Me” sign that predators key on. Where bait is plentiful you will also find trout and redfish, sooner or later.

What about all those small perch following your lure across the potholes; did you notice that? Trout and reds will position in grass on the edges of potholes for camouflage, which aides in creating better ambush points. Close attention to the location of your lure at all times will show you where your target areas should be. Knowing where the bites are coming should lead to searching for why. Why will lead to when, and when leads to how. Such a great puzzle that fishing can provide if we are willing to put the pieces together.

Wind can definitely be your friend when fishing grass flats. Strong winds create false tides in many areas, which equates to more water in a given area than the tidal level itself would provide…thus the term false tides. The abundance of grass on these flats contributes greatly to improved water clarity. Water currents created by wind also forces fish to windward areas that can be found along edges of humps and small islands within the flat. These become great areas to focus our attention on.

Other areas of interest would be clumps of mangroves, sometimes on small natural islands on the flats and also along spoil island shorelines. The primary key to these areas are the sand rings that are most often positioned on the windward sides of the spoils. Wave action creates erosion that forms an area void of grass. I refer to these as fish highways. Smaller lures placed accurately along the edge, where the grass transitions to sand, can produce unbelievable results at times. I remember a day with Drew and Allyson Donaldson in South Bay. Allyson stood basically in one spot casting to one small area of sand, sticking fish after fish. Drew and I had the pleasure of watching and enjoying a really solid day of fishing.

Water levels can sometimes influence where game and baitfish might stage on a flat, but I do not subscribe strictly to the theory that higher water levels will always push the fish higher. In fact, I believe it can be quite the opposite most of the time. To me, it’s more about bottom structure than water level, and  structure does not move with the tides. If we remain true to targeting areas of structure, our production should remain consistent no matter how the water level might fluctuate. I actually feel that redfish become more aggressive when the water levels are higher.

It is a fact that fish will most always position themselves to face and feed into whatever current is available – tide generated as well as wind-driven. I therefore prefer to place my casts at angles to the wind rather than directly downwind. Casting straight downwind means the lure will more often be approaching the fish from behind, whereas the crosswind cast has the chance to intercept more areas of structure, and enter the fish’s vision at a more natural and favorable angle. I refer to this as allowing the wind to bend the cast.

When fish are moving and feeding into a current they will sometimes be reluctant to alter their course to grab your lure. I learned this many years ago while sight-casting. Bending the cast brings your lure across and in front of the line they are moving on. The simple turn of the head can provide a take; which is another cool name for a bite. Little effort from the fish is required and the basic line it is traveling is not altered in the process. This technique works equally well for wading or drifting. The boys and I used it religiously in redfish tournaments that did not allow wading and won a couple of boats. It can be especially effective while drifting on windy days and fish are scattered across large areas of grass flats.

In the soft plastic department, we need tough baits that can withstand the abuse that pesky tail-nipping piggy perch and pinfish can dish out. In my book, any lure missing any portion of the tail is worthless. I prefer lures without brightly colored tails, in color patterns that match the wind and light conditions. Whenever I feel I need the added enticement of chartreuse to attract more bites I will opt for a chartreuse jighead rather than a chartreuse tail. My thinking is that if the chartreuse is attracting the fish’s attention, I would prefer it on the head and not the tip of the tail. Call it part of my mental game.

Hope this month’s article  and short video will help you catch a few more fish.