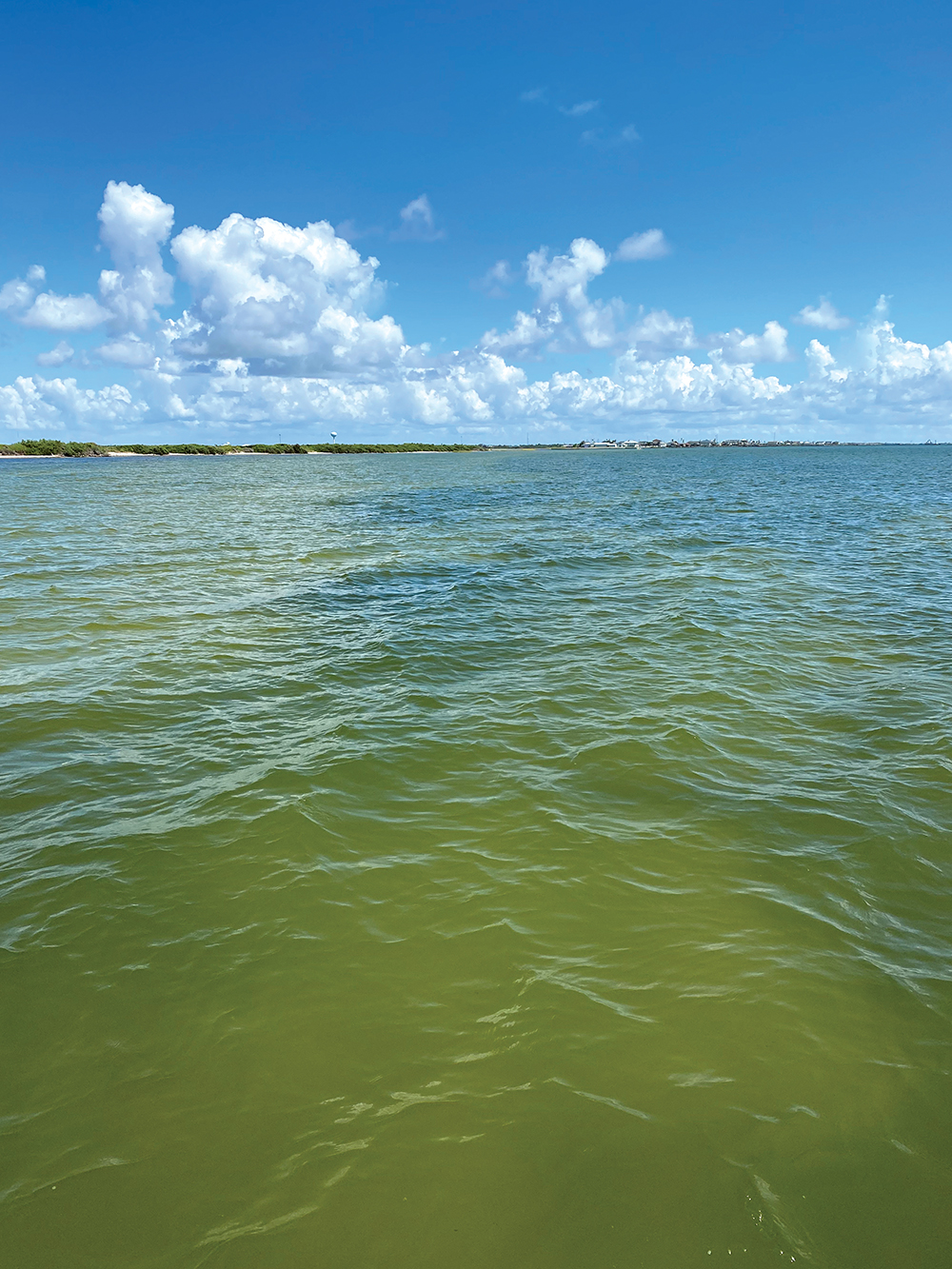 The passage of each day brings us closer to what I believe is the absolute best time of the year on the Middle and Lower Texas coasts. Current conditions include daily highs still in the mid- to upper-90s with water temperatures nearing 90° most days. Tides are still seasonably low on average but with tropical storm activity entering the Gulf of Mexico as of this writing, tides are sure to be on the rise, and this will be a good thing. Through September and early October we can expect more tropical activity and likely a weak front or two. I love summertime and not having to wear so much gear but always look forward to the cooler months.

The dredging of Cedar Bayou continues and should be completed by the beginning of October. I see this as the lifeblood of northern Aransas Bay, along with Copano, St. Charles, Mesquite and the southern portions of San Antonio Bay. All the smaller bays; Dunham’s, Spaulding, Carlos, Cedar and Sundown will benefit similarly and I expect our back lake trout fishing will be much improved this fall and winter, especially when the tides are moving.

Right now we are dealing with very calm conditions and extreme heat. Trout fishing was better during July and August, due in part to the fact that the fresh water influx displaced the freeze survivors that would have normally been scattered all across the Aransas system, and they congregated in saltier pockets farther south. Moving water has been a huge key to catching the trout that I have been able to pattern. Our bite is definitely an early morning gig while redfish provide excellent angling during midday and afternoon hours. These tactics are the focus of this month’s article.

Redfish tend to be more shallow water oriented and grass flats along spoil and mangrove islands create ideal habitat for the variety of food sources they thrive on. Crabs and small shrimp are some of the more common stomach contents many will see when cleaning their catch. Shallow water naturally creates smaller feeding zones, and also smaller strike zones for anglers to target. During periods of low tides, redfish will push up into the flats, feeding in the reduced water column. During higher tides, when the water is deeper on those flats, it is not uncommon for reds to stage along the outside drop-off of the flat proper.

During the hottest months, July through September, our shallow flats cool during the night and then become super-heated during the day. This promotes nighttime feeding no matter what the moon phase might be. Winds during these three months are historically light, with the exception of tropical activity or the occasional thunderstorm. Days with little or no wind will typically produce the hottest water temperatures, hot enough to drive redfish and baitfish alike to the nearest deep spot and cooler water. Deeper potholes or swags and swales found on larger flats can fill up with fish waiting out the heat.

I look for guts and washouts that extend into a flat with small fingers or feeder guts where water drains and floods the flat during tidal movements. A very critical aspect in this process is to look for the washouts and guts that have slightly off-colored water. The off-colored water is many times the results of good numbers of larger fish hanging in that specific washout. The smaller the feeder guts the better. The smaller guts function somewhat like a funnel, increasing flow velocity during tidal movements and also when passing ships and barges push a broad wake toward the flat. Smaller zones also concentrate the fish for us – the greater the number present the greater the competition for food will be. This will result in some fish taking a lure simply to keep others from getting it. Remember this: A fish doesn’t know a lure is not food until it’s in their mouth.

We must also take into consideration the amount of early morning boat traffic on the flats as more anglers are choosing to fish the early morning hours versus the hotter times of the day. I honestly fish very little in the afternoon anymore during summer. I am older and my clientele are too, for the most part. In my younger days my summertime game plan focused on trout early, and then waiting for the heat to drive the fish off the flats into deeper potholes or drop-offs. I remember learning this pattern from David Wilson and Robby Barker more years ago than any of us probably care to remember. The gut at South Bay is notorious for this summertime pattern. David and I would wade up into South Bay early in the morning and sight-cast reds, and then follow them to the drop-off of the gut or on the opposite side along Corpus Christi Bayou. David called it Catfish Bend and I still do today. Jay Ray has a different name for it and I never knew where he was talking about until we fished it together one day.

By early afternoon the numbers of redfish that show along this drop-off can be amazing. I do believe that some of the larger reds actually pull up to the edge of the drop-off and were never actually on the shallow flat. I base this on the size of fish we caught by sight-casting the flat compared to those we caught on the drop-off. If this is indeed true, and I believe it is, then it’s the best of both worlds, right? Two totally different age classes of fish coming together forming larger schools of very competitive fish. We had some very productive afternoons wading the boggy edges of the gut and the channel, that’s for sure.

We know that low tides, high water temperatures, and boat traffic all play a role in driving the red fish to deeper areas around our flats. That said, what’s the best way to catch them?

I have long preferred 5-inch rattail plastics but a smaller MirrOlure or Bass Assassin rattail or paddletail is hard to beat for redfish production. I do not use them often but I know how productive they can be. In my redfish tournament days we mostly threw spoons and the 3-1/2 and 4-inch Bass Assassins. We won  a few boats with them so that should tell you they can be especially productive. Morning Glory-Chartreuse, Plum-Chartreuse, Watermelon Red Glitter, Golden Bream and Molting are great color choices. I think my knowledge of how many large trout will hang with larger reds keeps me wanting to throw that larger 5-inch confidence bait more times than not. Just a few days ago we had a school of reds and drum working a drop-off and I pulled a 6-plus pound trout right out of them on the larger offering.

I like to get the lure low in the water column, literally dusting the bottom. Reds are nose and eyes down much of the time so by dusting the bottom or skimming the shoal grass your lure will be right where she expects her next meal to be.

Standing as far out and away from the washout and its feeders as possible is also critical. The greater the number of fish the easier it will be to spook them. Truth is, they will spook on the hookset and also spook to some degree from the actions of the fish you have hooked. But by staying a good distance from the area where the redfish are holding, you allow them opportunity to settle down and resume their normal activity without bolting for the horizon. If you’re not capable of long casts then you need to practice. It’s no different than hitting a golf ball. The more you practice the better you will become.

If fishing in the heat is no concern for you, you might consider fishing for reds in middle to late afternoon hours. I can promise that you won’t have nearly the numbers of boats on the water and you just might catch that trout of a lifetime mixed with the reds.