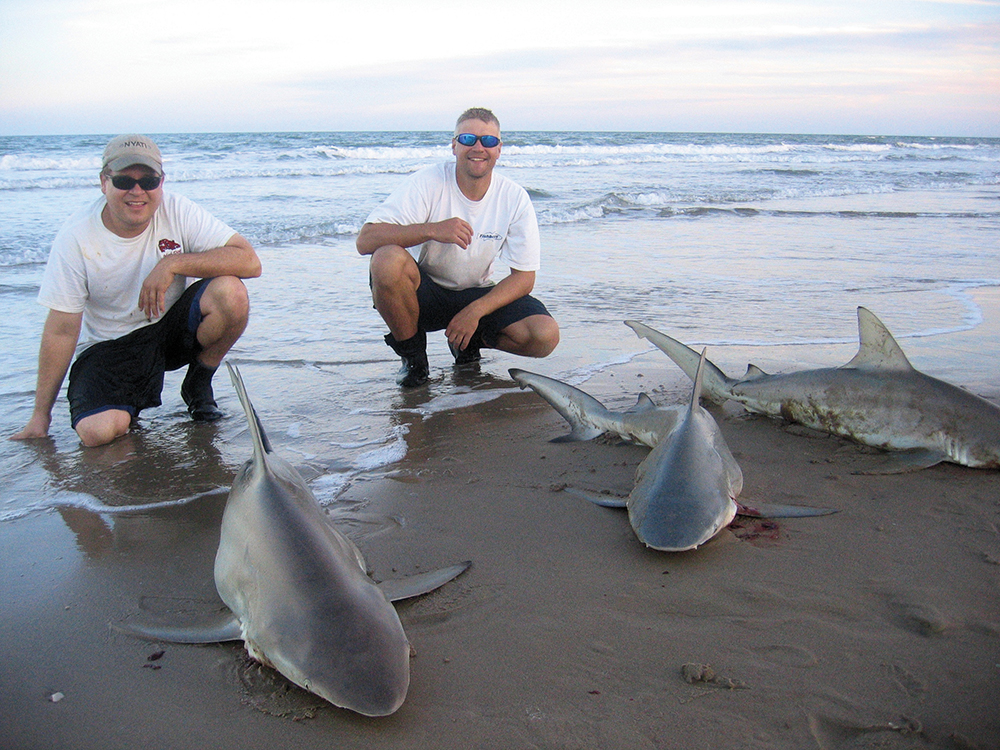 In younger days…Scott Nelson and author Oz with triple blacktip hookup and landing.

I'm glad to say I've lived a charmed lifestyle for most of my adult life. The friendship bonds I've established feel stronger than the chains of time. My lifestyle came into fruition not by choice, but by chance. It started when I moved to the Coastal Bend to attend Texas A&M Corpus Christi, mostly looking for an excuse to fish; school became my passport to a magical realm.

Early on in my college career, something transformative happened. Curtis Mai, one of my newly found fishing buddies, presented me with an opportunity at a job abroad. Accepting this offer would be the prime factor that would ultimately lead me down a winding road to a whirlwind of adventures. My memory of life abroad will always be infused with unique fishing experiences, but it wasn't until we returned to Texas that we evolved into rock stars.

For me, the beauty of the world before social media centered around using the internet to explore websites and forums relating to fishing. I stumbled into these salty corners of the world wide web late in my teen years and became a regular presence in them. Fishing forums rewarded individuals who posted detailed, personal reports more purely than today's models, such as Facebook. In those days, authors of posts didn't have to cope with so much negativity and post hijackers. Most of us felt great pride when posting our special moments on these forums, and in return, we garnered respect from those who read them.

Many of the friendship bonds I cherish today started to form in conversations on websites such as David William's Coastal Shark Fishing. The relationships we forged provided me opportunities beyond my wildest dreams. William's site eventually inspired me to create my own site (eXtremecoast) to carry on CSF's traditions.

We lived a lifestyle which made us feel like rock stars, spending what seemed like endless weekends on the sandy beaches of Padre Island, picking fights with sharks. After a couple short years spent on a fishing rampage, our small group earned the label “usual suspects.” We filled our trucks with an amazing array of music, lived on a diet of bacon-wrapped fillets provided by Trevor Lovett, and sampled both fine and horrendous liquors, thanks in part to our fearless leader, Curtis.

I salute all the rock stars I knew in those days, like Pat Jordan, Russell Weir, and the charismatic Mike Shindle, who often favored the German greatness that is Rammstein. Mickey Berry, Kip Kaaialii, and Christian Rowlett contributed their play lists, displaying fun and daring attitudes. Dwade Hickey, Rick Underbrink and Scott Nelson all played individual roles in our pursuit of island fame, both on and off the beach. These dudes worked hard, partied harder and fished with relentless commitment.

Any time we weren't seeking thrills with toothy critters in the surf, we lived like rock stars at home. Nightlife was our only life for almost a decade. During much of this time, Curtis and I lived together in a house we labeled the “Rock Star Mansion,” or RSM for short. Many island folks heard wild tales of nights spent at the RSM, crazy fun nights fueled by music and copious amounts of alcohol. We did go out and do the bar scene, but much of the time, the bar came to us. Outrageous late night settings produced some truly daring stunts by all us renegades.

Our star power shone brightest when we posted incredible reports from the beach and the kayak trails. But it didn't stop there—a group of us became the “boys of summer” while we fished regularly aboard a sport fisher known as NYATI. The treble always rang and the bass always thumped on the deck of that craft, where many fine fish met their demise. Out on the open ocean, blaring Master of Puppets, we hooked and dueled with a variety of impressive predators, from dancing mahi mahi to gray-hounding blue marlin. Electronic Juno Reactor mixes kept me up on night shifts and helped fuel our midnight tuna slaughters.

We selected songs for specific occasions, such as when someone strapped into the fighting chair to battle a sea monster. We'd throw in a comedic celebratory chicken dance after releasing a billfish to honor the life we led. Perhaps nothing provided more laughs than Shindle and Clark squaring off to perform dueling air banjos on the ride home after a long and successful trip.

The labels we earned stayed with us through those days; some endure today. Team Rock Star has participated in the Texas Shark Rodeo for over a decade, basically becoming a household name in shark fishing. Over the years, we cycled through various teammates, some who could and some who could not fully contribute, but Scott Nelson and I have been the constants. We've both landed some of the biggest sharks to ever grace Texas' beaches.

If I hadn't adopted the rock star ways, most of my sponsors would never have offered their loyal services. Living the majority of my adult life in free board shorts feels satisfying indeed. The partying, the adventures, the fishing, all were done while jamming to our favorite songs on life's head-banging play list. Through all these years, we've never grown tired of this illustrious gig. To this day, we thirst for more jams and more epic thrills. I'm so grateful for my friends, who formed a family of fishing celebrities and who live like rock stars.