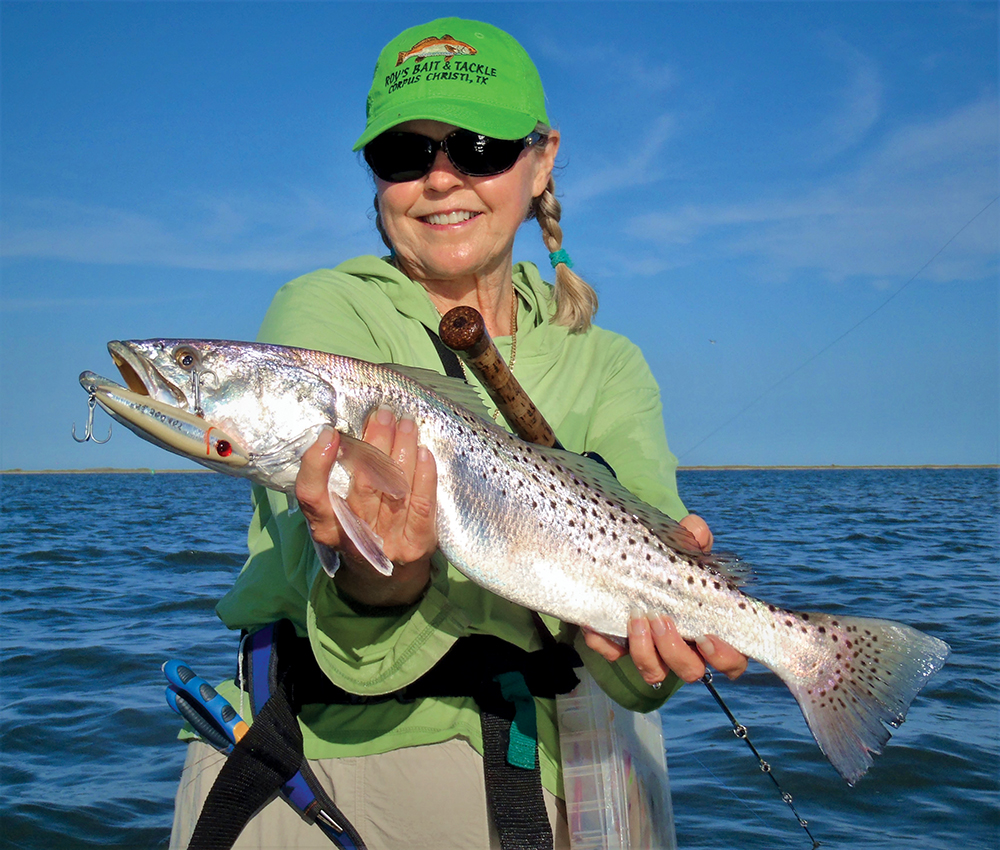 Diane Jans with a trout caught on a bone/silver Top Dog, a consistently productive plug during the fall months.

In many ways, September plays a transitional role in the lives of coastal anglers. On the calendar, the month ushers in autumn, and brings the hottest season to its end. While  students return to classrooms and football stadiums fill with fans, fronts pass over the coast with greater frequency, lowering temperatures and humidity levels. Normally, sometime soon after the equinox, the changing of the seasons produces a raging bull of a tide, which fills the backwaters of our bays to their brims.

Anglers with ample experience fishing the Texas coast during this time of change mostly perceive September as a tough month, especially those of us who use artificial lures exclusively. This general truth applies for several reasons. For one thing, despite the fact that fall starts toward the end of the time frame, hot weather does linger, seeming to stifle the enthusiasm of both anglers and the fish they target. For another, flooding backwater lakes, coves and tidal flats provide more places for trout and redfish to reside, making them harder for anglers to locate. And, the end of the warm season coincides with the highest levels of biomass present in the estuaries.

Predators surrounded by ample sources of food can become hesitant to bite something crafted entirely by the hands of man. Normally, all these factors become less of a hindrance to lure chunkers once the stronger fronts of October blast across the waters and drive tide levels lower, sloshing things around and enhancing our efforts. Until then, many would benefit from making sensible plans to beat the late-summer doldrums and find fun in this month's fishing.

Returning to their roots as saltwater fisher-people would serve some folks well. Fishing in ways which recall long gone days and which reinforce things which originally drew them to the activity makes perfect sense. For lots of people, one of these plans involves a profoundly simple and satisfying act.

Many Texas saltwater anglers developed a love for fishing the coast after making that short walk from the bumper of the truck into the first gut in the Gulf and wetting a line. In the beginning, they likely did so without any preconceived notions about what kind of fish they wanted to catch. Some still don't care what swims along and takes a bite, but most of the more experienced anglers would want to catch trout and/or redfish these days.

Winds often fall quiet in the wake of the weak fronts which pass over the strip of sand fronting the ocean this month. When this happens, green water graces the beach. Then, for a couple days, catching speckled trout on lures in the surf becomes much easier than normal. Making a drive along the beach and looking for the right signs of life, or trying to read the waves to find places where irregularities in the sand bars create sweet spots provides an elemental and nostalgic thrill to many.

Few things elevate the heartbeats of anglers with salt in their veins faster than casually crossing the ever-shifting line between two worlds and hooking a solid trout on a lure.  Topwaters often work well in the September surf, and tricking fish on top generally thrills a lure chunker more than catching them any other way, adding a dimension to the prospects for injecting joy into September fishing. Certainly, catching a bunch of fish on 51 and 52M MirrOlures would do the same for most anglers who've spent plenty of days targeting trout in the Lone Star State.

Others will likely find more satisfaction and reminiscent qualities by targeting reds in the Texas surf this month. While a wading angler chasing trout in a calm surf might catch a redfish at any time, anglers hoping to catch the biggest reds do better by fishing with stouter tackle when onshore winds churn up the waves and turbidity somewhat. Those anglers also benefit from the choice to use live or cut bait to attract the attention of adult red drum, which enter the shallows fronting our beaches this month with hopes of making more of their kind. Fighting these drag-stripping bullies with the waters of the Gulf sloshing around the ankles provides a thrill to many old salts.

Undeniably, most Texas saltwater fisher-people prefer catching either trout or redfish above all other species. But, in a month in which catching the celebrities can seem tedious, many folks might find more pleasure while targeting other critters which eagerly attack our lures in the heat. One of these receives scant praise from the average coastal angler, and this seems a shame, given the strength and spastic energy with which it fights. I refer here to the fish with many names—the skipjack, or ladyfish, also known in some circles as the poor man's tarpon, or ten pounder.

I admit, I've needled my customers many times when we realized they'd hooked one of these fish while we're on a mission to catch a big trout. Sometimes I say, “Uh oh! It's a poor man's tarpon. That makes you the poor man!” We often laugh at our misfortune, while the slender, acrobatic fish flies around among the waders in the group, attempting to rid itself of the irritating hooks. A more healthy attitude would certainly involve remembering why we love fishing with lures in the first place, especially when the skippies show a willingness to tackle our floating plugs.

I say it all the time; for me, the most enduring and appealing aspect of fishing is the challenge of earning strikes. Ladyfish pay it forward like few others, often ambushing what we offer with reckless fervor, and pound for pound, they pull about as hard as any creature covered with scales and slime. Anglers tired of grinding to urge speckled trout to bite during this transitional time should make an honest attempt to relish the fabulous, fun fact of the blow up and the aerial fury of the fight when they hook a skipjack.

Many of us became addicted to lure fishing after we learned how to make fish blow up on cigar shaped plugs like the Jumpin Minnow and the Super Spook. Skippies usually like slightly smaller lures better, often making fools of themselves in attempt to eat Spook Juniors, Baby Skitter Walks and Spit'n Images. Actively targeting them when possible this month can insert smiles into September wading sessions and help us remember why we've chosen this form of the angling sport.

Another way to return to roots and make the most of outings this month involves taking advantage of the access the bull tide provides to the distant nooks and crannies in our coastal waterways. When the equinox moon sends water into remote parts of the marshes, trout and especially redfish sometimes follow the rising tides into areas normally too shallow for them.  When this happens, anglers can find ways to either walk into some of these places or use boats with shallow drafts to access them.

Poling around in areas often inaccessible to us provides a familiar thrill to many people. As with these other activities, plenty of us were originally drawn to saltwater fishing because searching for new places in all these miles of coastal water satisfied some kind of inner Magellan residing deep inside us. Surely, catching a fish in a habitat normally more suitable for rattlesnakes than rat reds helps many of us recall times when we found simple pleasure in exploring remote parts of the bays for the first time.

Lucky folks who've had the great fortune to fish almost every named bay, lake, cove, point, reef, sand bar, flat and spot on the Texas coast find it difficult indeed to rekindle the joy associated with learning things about a place entirely new to us. But for the average angler, even one with a moderate level of experience, this quest has greater appeal. Lots of people would likely benefit from making a conscious effort to try new places during September.  Doing so after spending some time studying images on Google Earth makes sense, as does traveling to new areas when benign conditions create good water clarity and facilitate moving around easily.

Anglers heading to unfamiliar parts of the bays, whether those new to them or those often too shallow for access, should do so cautiously and without high expectations related to fast catching. Placing a priority on learning as much as possible about the layout of features, whether the bottom is firm, medium or soft, and which parts look most likely to produce bites, will pay bigger dividends than expecting to catch fish hand over fist on the first few visits.  Over time, this expansion of knowledge of new areas will likely enhance the productivity of anglers who put in the effort.

We all know catching is more fun than fishing. This undeniable truth can lead to frustration for some folks, who take it too seriously. In September, a month often associated with doldrums, taking steps to rekindle some pleasures of the past and placing more emphasis on process than product can help anglers feel more love for the fishing.

A Tip for Fishing Calm Conditions