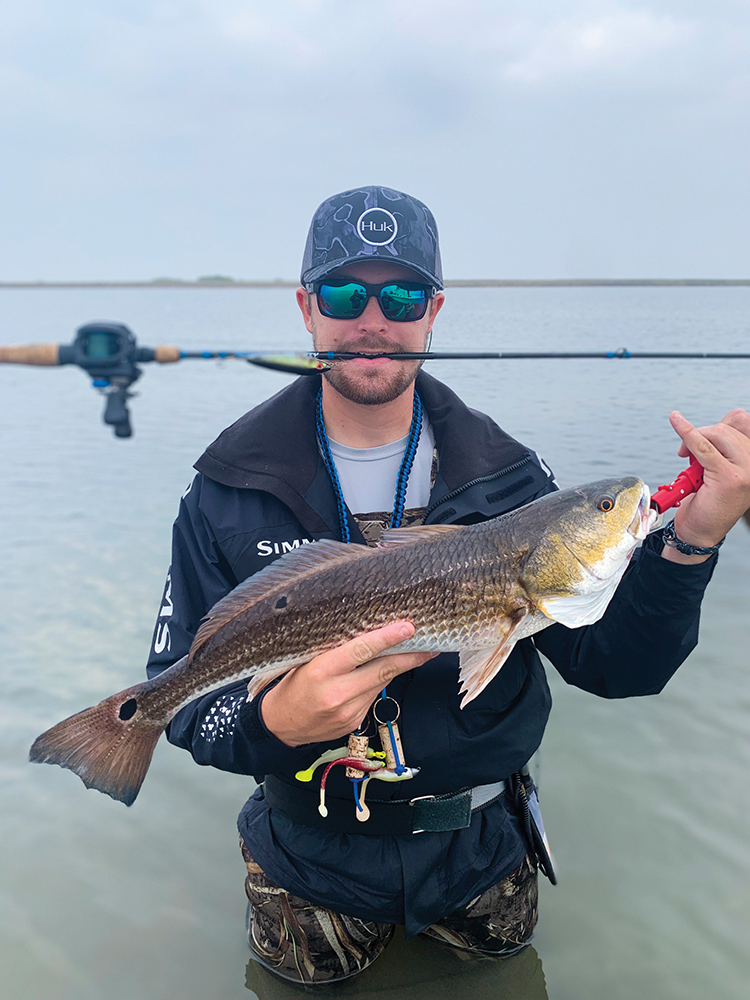 Soft plastics with large paddle tails have been top producers so far this winter.

Like a gambler at a Las Vegas blackjack table, every fisherman from one end of the coast to the other will sit down before making the first cast of any trip and survey their odds in order to put as many variables in their favor as possible. The thought process that goes into every fishing trip often dictates success or failure and at very few times is that decision process more important than the winter months. This is due to the fact that window of opportunity is often very small. During brief feeding periods when time is of the essence, obviously, choosing the right lure is important because you only have so much time to figure out the pattern.

Several key factors weigh in on your lure choices, not only for this month but basically all other months as well. But in order to keep this thought process simple we’ll limit our choices to winter months and the best options for that timeframe. I cannot stress enough how important sound or vibration is during cooler temps associated with winter time fishing. I personally don’t believe that vibration or sound, within reason, will ever negatively impact your success. Sure, there are times when one particular sound or pitch will draw more strikes, no argument from me on that, but the difference between sound and no sound in your lure presentation is night and day different.

Perfect example is the pitch from rattles inside a topwater plug; often times the higher pitch from plugs like the MirrOlure She Dog or Pup will draw aggressive strikes in deeper water as those fish will search out the noise like they will a rattling cork. The She Dog and Pup are both equipped with several smaller beads inside them and they can be heard from great distances, especially under water. Conversely plugs such as the Super Spook, One Knocker, and Skitter Walks all have a single larger rattle inside that exudes a clicking sound of a much lower pitch. Plugs with the less-aggressive single bead tend to work better in shallower water where the noise variable is a little more critical.

Another key factor on lure choice is vibration. So far this winter one of the best producing lures I have seen have been soft plastics with large paddle type tails that give off a ton of vibration when they are slow-rolled on a constant speed retrieve. Down South Lures and Kelly Wiggler both make great soft plastics that fit the bill for the vibration as does Marker 54 Lure Company. These soft plastics rigged on 1/4 ounce jigs have accounted for more than their share of quality fish this winter and there is no reason that trend shouldn’t continue. The subtle presentation these soft plastics offer, coupled with the outstanding vibration created by the tails, make them a definite go-to bait, especially in off-colored water. The profile and vibration are tailormade for fish to find in stained or muddy water associated with runoff and/or low tide situations. Add the simplicity of the slow-roll retrieve, especially for novice anglers, and you have an outstanding fishing lure.

Now that we have run the gamut and covered the top of the water column as well as the bottom, it would a shame to neglect the middle. Without question the most difficult fish to catch are those suspended somewhere within the water column because the presentation is difficult to get right. I have always been a proponent of stick or jerkbaits that run a few feet below the surface and then suspend when stopped. There is perhaps no better time of the year to use one of these baits than during the winter because they really shine under these circumstances.

The suspending jerkbait will allow the angler the opportunity to run that bait down to a certain depth and let it stay in the strike zone for a brief period often drawing vicious strikes while it slowly floats back to the surface. Another benefit of the suspending jerkbait is the fact that you can run that bait into and around structure like shell and allow the bait to “back up” after contact. Once you make contact with structure you can allow the bait to sit there a moment before continuing the retrieve, this pause usually draws serious strikes as well.

Throwing these jerkbaits is easily one of my favorite winter patterns and one that many saltwater anglers rarely use. Over the years I have converted many folks to this style of fishing and it’s always fun to see them succeed as well as add a new technique to their arsenal. For years baits like the classic Redfin or Broken Backs were “the bait” to use for big fish along the coast and for whatever reason they lost favor among Texas anglers. However, these baits have been making a comeback as more folks are discovering what they have been missing and enjoying plenty of success.

With our lure options now covered for all depths it’s safe to say that having sound and vibration on your side with a somewhat subtle presentation should be near the top of the list when choosing a bait this winter. During times when fish feed heavily, the choice is not quite as critical. I have seen fish in 48° to 50° water absolutely annihilate topwater plugs like it was the middle of the summer. Remember these fish have to eat at some point and half the battle is being there when it happens. I know there are plenty of TSFMag readers out there who have spent their share of long hours in the winter looking for that one big bite in just about every imaginable condition. For many the thought of countless hours with unfulfilled casts is far less than appealing but for those who have been rewarded for their persistence there is no better feeling.

It’s almost a given that the next two months will produce some of the biggest of the year for Texas anglers and it could happen at virtually any location on the coast. Every year one bay tends to lead the pack and becomes the hot spot for the year. It’s always interesting to see how it plays out. For the last couple of years East Matagorda has been the place to be as it seemed like every time you logged onto social media there was a picture or video of a 30-inch trout. Baffin Bay and the Laguna Madre are always contenders as well, while every now and again a dark horse like Trinity Bay jumps to the forefront. Regardless of where you go, take the time to consult the solunar feed times and factor in as many variables as possible. Your next cast this winter could be the fish you have been chasing your whole life.