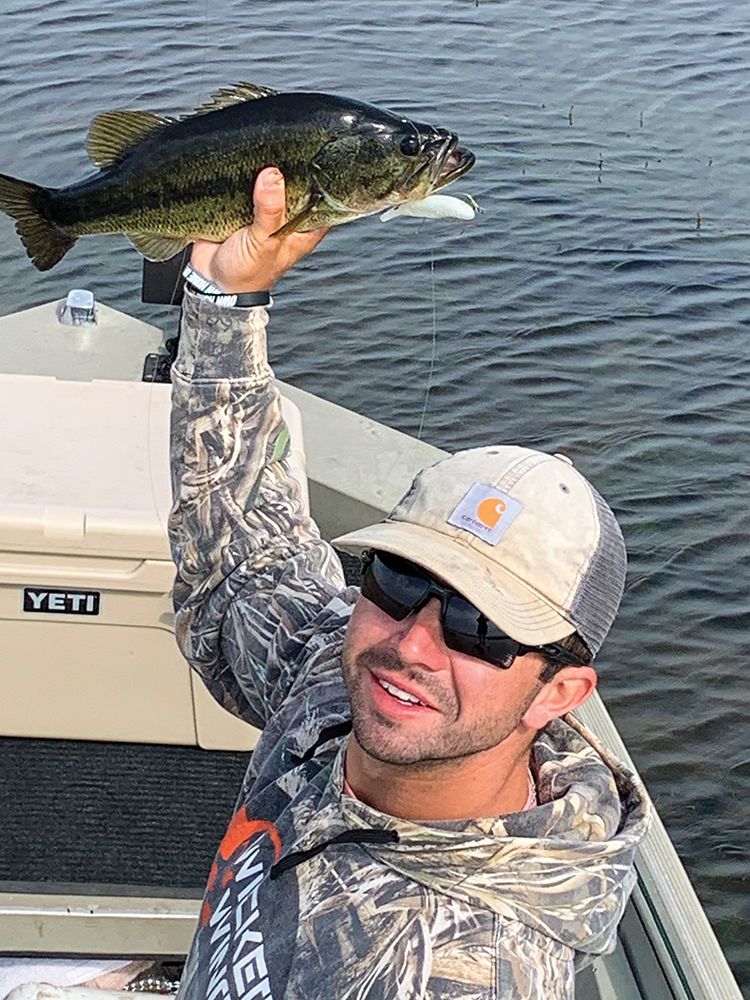 Redfish aren’t the only species you can sight-cast in the Sabine marsh.

After many years on the water and sharing time with people from all walks of life, you can imagine some of the questions I receive. One of my favorites is, “What is your favorite way to fish?”

If pressed for an answer, I would have to say sight-fishing would be at the top of my list. Having the opportunity to see the fish, make a cast and watch it take your lure is a sensory overload to say the least. Sight-fishing is the ultimate combination of hunting and fishing, which makes it easy to understand why it can become so addictive. Just taking a guess, I would bet that 75% or more of TSFMag readers enjoy hunting of some type as well as fishing. I know in my part of the world here on the Texas and Louisiana border that’s the case, fishing and hunting are as close to a religion as you can get without a church.

During duck season I took a brief intermission south of the border and as my small skiff settled out over a bright and endless Caribbean flat covered with air clear water, it was instantly obvious that just like Dorothy in The Wizard of Oz, I wasn’t in Kansas anymore. Everything about it was far away and different from my normal Upper Coast home waters where clarity is measured in inches, not feet.

From atop the poling platform I could see a school of bonefish milling about in the shallow water in search of small crabs and shrimp; the scene was classic, showing their tails and easily giving away their location. It was a gimme, as they say, as easy as you could ever hope from one of the wariest fish that ever swam in the ocean. All those good vibes disappeared in the blink of an eye though as one awkward move led to an awkward cast and two anglers shaking their heads wondering, “How did we miss that one?”

Scenes like this play out over and over as anglers who enjoy seeing their fish before they cast to them make mistakes that leave them wondering whether they should revert to soaking dead bait. The frustration factor for sight-fisherman is high and more often than not outweighs the success ratio, but on the day it all happens just right there is no better feeling.

If I had to put it all in perspective, I get as much or more enjoyment out of coaching an angler to a fish than I do catching one myself. I never thought in a million years I could be in a boat all day long, never pick up a rod, and still call the trip a success. I routinely never cast on sight-fishing trips because I get such a kick out of watching clients, especially those who have never tried this style of fishing.

Hunters call it buck fever; veterans and beginners alike succumb to “the shakes” and miss easy targets. Believe me when I say I have watched plenty of fishermen fall victim to the redfish version of the same affliction. Even accomplished anglers sometimes look like they’ve never held a fishing rod when they see a big redfish within easy range. It’s both comical and embarrassing how many competent fly-casters get wrapped in their own line and backcasts snarl and snatch on everything within reach during the excitement of the moment. It can get crazy and I guess that’s why we love it.

Wind is always a factor in this game and we’ll just have to wait and see how everything plays out in the coming spring months. Strong winds will muddy the waters seemingly overnight and make finding fish extremely difficult. At this point we move over to another of my other favorite methods and that’s fishing structure.

Saltwater structure varies in many ways and can be as simple or complex as you want to make it. For instance, let’s talk shallow structure. Small, very minor depressions in a flat can be called structure because they fit the mold. Structure is something different in an area that fish relate to or use for certain purposes like food or shelter. These small depressions can offer fish an opportunity to escape a stronger tide or aid them in ambushing baitfish.

More noticeable structure could be grass lines or other vegetation growing in or along the edge of the water. Some grasses can actually help you locate certain types of structure, like underwater points. Along the banks of the Sabine River we have a certain spartina-like grass that grows along the shore, and each place where this grass grows usually indicates a shallow point that juts into the river. Points like these are fish magnets and we have had some incredible days fishing the down-current sides of them.

One day many years ago Capt. Dickie Colburn and I were fishing a stretch of the Sabine River where we knew a herd of redfish had been hanging around for more than a week. For some reason we couldn’t find them until we adjusted our position on the anchor by letting out about 30 feet of line and slipping into the perfect spot. Our adjustment allowed us to remain within casting range but kept us off the big concentration of fish. Any other set up would result in either spooking the fish or not getting bit. The adjustment allowed us to pull our baits over the submerged where the redfish were ganged up escaping the current. It was truly a light bulb moment and proved how being off the mark by only a few feet can be the difference between a great day and a zero.

Now a more classic version of structure for saltwater fishermen are reefs made from various types of shell – oyster, clam, or mussel. These areas are perhaps some of the most targeted pieces of structure in all the bay systems along the Gulf coast. A productive reef can and will attract plenty of attention from both fish and fishermen and each bay has its own popular reefs. Fishermen congregate regardless of whether the fish are biting or not, everybody knows about them, and consequently everybody fishes there.

The real hidden gems, though, are the small reefs that not many folks know about because they receive little pressure and often produce big fish. I know guys who guard these areas like they were gold; they will often abandon the area if a boat gets too near, only to return when the area is vacant. GPS numbers to small hotspots like these are closely guarded and rarely shared with someone outside the circle of close fishing partners. If you are fortunate enough to find a place like this you would be wise to keep it to yourself.

Fishing structure is not for the impatient; in fact it requires a much slower approach than normal in order to cover everything thoroughly. I’ve been taught lessons on the water about slowing down on several occasions and one that comes to mind is dropping anchor on drifts instead of dropping buoy markers. In years past we would make long drifts down Sabine Lake, catch some fish, and repeat the drift only to catch fish in basically the same areas. It was fishing on a conveyer belt; you went round and round until the fish quit biting.

One day on Calcasieu I got schooled on a better way to go about this from a local fisherman. We were fishing the same area only we were going about it differently. The local guy was sitting on anchor while I continued to make drift after drift on the same line. After about three passes I heard the local guy say to his buddy in the boat, “That guy has a beautiful boat, it’s a shame he couldn’t afford an anchor.” Another light bulb moment and it has paid big dividends over the years.

Take your pick, sight or structure; they are both fun and outstanding ways to catch fish in virtually any bay system or body of water. Hopefully the weather and conditions will allow all of us the opportunity to use them both this spring to fullest advantage.