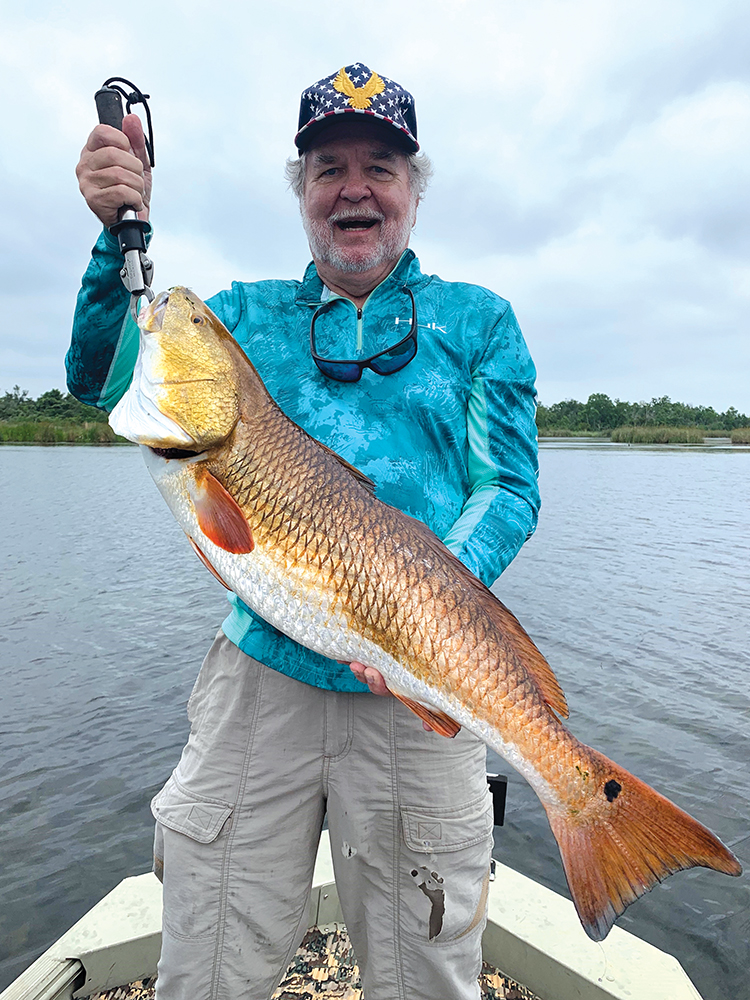 Gary Reicherzer with an absolute stud – 17-pound redfish from the marsh.

Like a scene from a cheesy, low-budget soap opera; where you think the star has departed for the great beyond, and then suddenly you hear the beep and the heart monitor screen flashes the familiar peak and valley rhythm of another miraculous return to life – Sabine Lake appears to be on the cusp of resurrection.

No, it’s not like the old days when the summer meant every pattern you chose would almost guarantee a day full of satisfying action on the water. No, it’s not like the old days when a 5-pound trout would barely raise an eyebrow. What it is though could best be described as progress in the right direction. Finally, we have something to get motivated and excited about as the conditions throughout the entire estuary system seem to get better by the day. Salty green water chock full of bait continues to permeate the open lake. The ship channel and surrounding rivers have been virtually untainted by any sort of big rain or run off activity from either Toledo Bend or Sam Rayburn to the north. The overall condition of our little bay is as good as it’s been in several years and that has most local anglers feeling at least cautiously optimistic for the coming summer months and beyond.

So far all the leading indicators that most fishermen judge the conditions by are about as good as we have seen them, especially compared to the last five years. Massive freshwater dumps courtesy of heavy rainfall from tropical weather events have been by far the worst enemy anyone could have imagined. There was one such deluge and runoff during the winter a few years back that quite possibly was the worst of all the storms Sabine has ever endured. Many folks, including myself, believe the rush of runoff during the really cold conditions that year was exactly what sent Sabine Lake reeling into decline and has taken such a long time to recover from. During the runoff event speckled trout, which were staged up in the deeper water due to the cold temps, were easily the most susceptible to feeling the brunt of the conditions. The massive push of water escorted a huge majority of the trout population out to the gulf and proceeded to deposit those fish farther down the coast. This event left most Sabine anglers wondering if the lake would ever get back to resembling what it once was.

On occasion there would be flurries of activity on the lake that would get local anglers hopes up for recovery, but sadly they usually fell quite short. So far this year looks and feels like the real thing, a bona fide resurgence that potentially could signal some real deal recovery for the fishery. One of the things I judge our fishery by is the amount of bait we see in the system. Sabine lake, when it’s right, has just an astronomical population of all species of shad and that’s exactly where everything starts. The huge rafts of shad gather up in the open lake and are nothing but a huge buffet waiting to happen for every species that swims or flies. Speckled trout, sand trout, redfish, catfish, and just about anything else with gills will shadow these big schools of bait until it’s time to eat, and that’s where the carnage starts. Right now the bait populations in the lake are the best they have been in a while, which is a great first step.

Another great barometer of sorts is seeing fish normally reserved for the jetties and gulf prowling around the open lake, especially the north end where the freshwater dumps in. Sharks, jacks, and even turtles have been lurking around the lake already this summer and that just goes to show how salty the lake is right now. I ran into a few of these little mini-schools of jacks while scouting and just about had to make myself finally leave them because they were so much fun to tangle with. I have spoken to several anglers who have had occasion to lose fish to sharks already this year, which is really saying something because its early for that to be happening.

As the saltwater continues to creep its way up both the Sabine and Neches rivers, one of our most favorite programs should come back to life and that’s the live bait in the channel pattern that is an absolute joy to fish. Speckled trout and redfish will stack up on the main channel breaks and be there in great numbers when you find them. There is nothing like setting up on anchor while soaking a live shad on a Carolina rig as you socialize with friends and family. This ultra-relaxed style of fishing affords anglers the opportunity to not only catch some really good fish but to do it in a great atmosphere with anglers of all talent and skill levels. Learning this program may have been one of the most valuable lessons my good friend Dickie Colburn ever taught me. Each time I park on a spot that we found together or fished from time to time I smile and thank him for showing me this pattern because it’s so special.

Now my personal bread and butter for the last fifteen years or so has been patrolling the marshes and backwater lakes that are so prevalent between Sabine and Calcasieu. I am so excited at how incredibly good this water looks right now. The water clarity is border line “too clear” and the vegetation is as perfect as one could ask for.

On a recent trip to the backwater with Gary and Ken Reicherzer, I almost had to pinch myself as I kept getting distracted by just how pretty both the water and vegetation was that we were fishhing. Water clarity was a good as any aquarium you’ve ever seen and the grass was so green it looked like something out of a Dr. Seuss book. All these gorgeous conditions and very little sunlight to help us appreciate the scenery but that did not matter, it was first rate beautiful. Our mission for the day was to locate and catch some redfish but that plan was derailed by the unreal numbers of largemouth bass we encountered. The “green trout” kept us busy until we finally located some redfish and watched them put on a show in that beautiful water.

From the gulf to the marsh, Sabine is really showing signs of coming back to life. There have been some quality trout being caught as well as good numbers of keeper-size fish, which is a welcome sight for many who thought they may never see it again. I believe as long as we don’t have anything crazy happen during the next several months with tropical storms or other severe weather events, Sabine Lake may have finally turned the corner.

Now, not to throw a wet blanket on all this positivity, but I would be terribly short-sighted if I didn’t at least ask folks to practice stewardship and conservation in the numbers of fish they decide to keep. Our trout populations, while appearing to be on the rebound, are still well below the long term average and need to be respected and cared for. I’m not saying we shouldn’t keep any, I’m saying be mindful of what you keep and only keep what you plan to eat fresh. We have been praying for a recovery and now that we appear to be doing much better it’s even more important to do our part as conscientious anglers. Enjoy your time on the water, respect the resource and, whenever possible take a kid fishing.