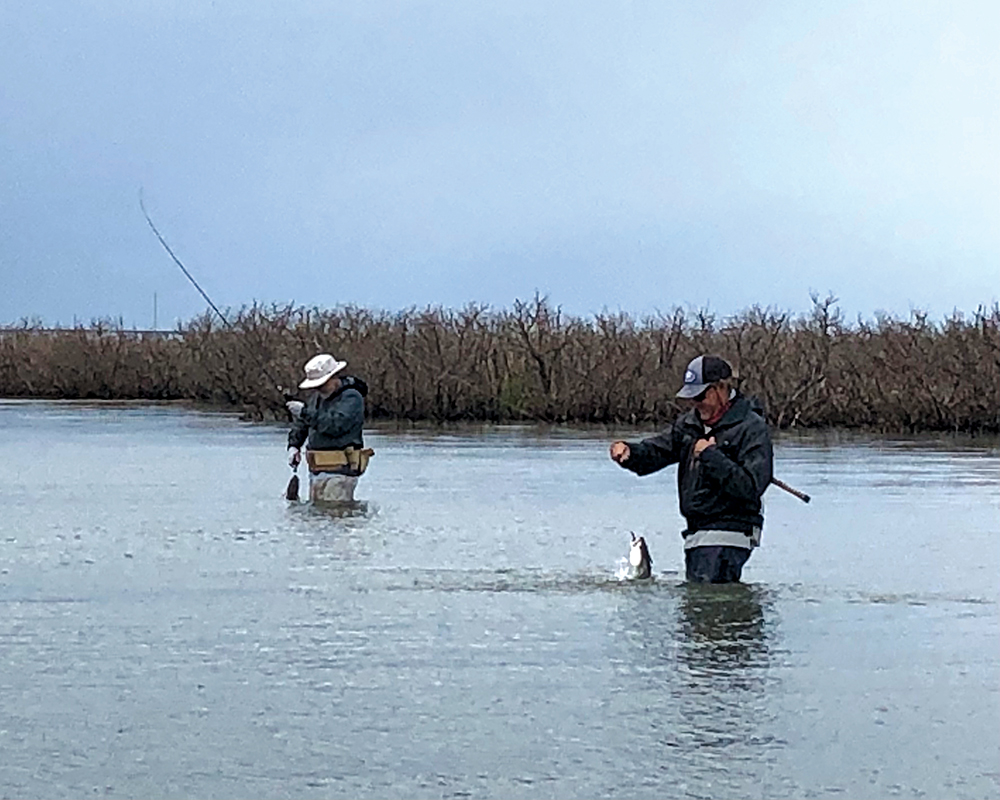 That’s a loaded question and opinions vary. I will not attempt to explain what I think people expect but will speak from personal experiences as a guide of 40 years. I will begin at the early stages of my career and finish with where I want to be at my 50 year mark. I fully expect to guide until I take my last breathe. Hopefully it will come on the hookset of large trout. My best friend, Lowell, told me the other day that he can’t wait to see what the next 10 years brings. That is a cool thing to say to your fishing buddy.

It was all about me in the beginning and honestly remained that way for about 20 years. I certainly had moments of teaching during this period but it was aimed more at advancing client’s skill to make me look good back at the dock. Everything was ego-driven during that period of my life. Stringer photos were standard practice and a vital part of my advertising campaign. Limits were ridiculous back then; 12” trout and 18”reds if my memory is correct; bag limits were 20 trout and 10 reds. It’s a wonder we have any left. For sure there was not the fishing pressure there is today, nor did we have the tools.

An old Roddy Rod was my depth and reef-finding tool. I didn’t even have polarized glasses; when I did get some they were Bill Dance Signature Series that cut holes in my ears after a long day. But they worked and I loved them. We threw Bingos, gold and silver spoons, and MirrOlures, in no particular order.

I remember Robert Brooks and I drifting a 16’ Polar Craft aluminum and catching trout on 52M51 and 52M19s, quality fish that many today likely have never seen. It was no big deal to drift or wade and catch large numbers of large trout. On guided trips I caught a lot of the fish my clients took home, most of them at times. Something I’m not proud of today.

By the nature of my fishing style I booked a higher percentage of skilled anglers. I was not exclusively wading after the ‘83 freeze. Trout mortality was over 80% and the ‘84 season yielded only 61 trout for me. I know this because I killed every one of them. Redfish saved us for sure but I was still the guide that loaded you up and went out and put you on the right area, but seldom truly helped you become a better fisherman. It was almost like a competition; it’s a wonder I had any repeat business. I guess the saving grace was the fact that even as a young guide I was good enough that it outweighed my downfalls. My attitude lost me customers at times, no doubt, but I will say that I did take constructive criticism fairly well.

My dad was a quiet-spoken man, a teacher and a coach, and not an easy man to please. He did not demand perfection but he did demand respect, self-discipline, and maximum effort. Show these qualities and you were good. He was a “show me guy.” He did not want to hear me say what I was going to do, “show me” he would say. I passed it down to my boys and even to clients that needed it.

Sometime in the late-80s, I remember asking a TPW biologist how long he thought the trout fishery could stand the pressure we were putting on it. He replied, ”You’ll never hurt them with a rod and reel.” In his defense there was nowhere near the fishing pressure there is today and the technology was nowhere close. With that said, we just kept pounding them, but all the while I was seeing small indicators that suggested the fish were changing their patterns. I now realize that the fish were simply adjusting to the increased fishing pressure so, in reality, we were actually causing some of the changes I was seeing.

By the year 2000 I was beginning to understand the importance of releasing larger trout. I did not demand that clients release upper-slot fish but made them aware that I thought we should. Tom Nix was at the fore of catch and release with his live-weigh tournaments, which I personally believe helped kickstart that movement. Some guides began slowly promoting the release of trout over 20 inches. The lack of social media and limited number of saltwater publications in those days contributed to the rather slow development of the movement. I was not on the leading edge of this catch and release movement but was definitely involved in reducing bag limits from 10 trout to 5 trout. I actually coined the “Just Keep 5” phrase.

By 2011 it became obvious to me that the only way to help conserve the fishery was to slowly teach my clients the importance of practicing some amount of catch and release. The coach I really never thought about becoming was slowly beginning to surface and I found great reward in teaching clients to become better anglers. My morning ride around the bay has always been filled with all sorts of discussion. Quality BS is the foundation for getting customers at ease once on the boat. If it’s football season, then maybe football; hunting season, then hunting, and yes, sometimes politics, which I know zero about. Seldom is it religion. Let the actions of the day speak for who we are in that realm, even though I do not always make the best showing in that department.

Never do I fail to stop the discussion and mention all that I am observing as we are running. At the end of every day I clear my mind in preparation of the day to come. In mid-sentence I might say, “See that slick? Now find the first piece of underwater structure that lies upwind and that’s where the fish will be.” Same is true of a color change, a line of brown pelicans, or mullet jumping frantically to the side or ahead of the boat. You think they were spooked by the boat, or maybe the boat spooked a school of reds that in turned spooked the mullet? I often pull up to an area and ask someone in the boat, “Tell me what you see.” This provides them the chance to “show me” what they know or do not and then I can instruct accordingly. There is nothing simple or easy about becoming a great angler. It takes the willingness to receive instruction from someone who has seen much of what there is to see out there. I had a guy say, “I would give everything I have to become as knowledgeable as you.” I replied, “That is exactly what it takes.”

So, in 2011 we started a very strict catch and release program on trout. This was especially true during our winter stays in Port Mansfield. It felt like the proper thing to do since we were visitors to the area and I knew it was the right thing as far as the fishery was concerned. A few reds or a few 15- to 16-inch trout were brought in once in a while for ceviche or a fresh dinner at the Pelican Bar and Grill in the earlier years. Today we are totally catch and release on trout but occasionally feast on a few redfish or black drum. Post 2021 freeze will be different; zero trout retained and will probably not even keep very many redfish since they have received more pressure due to the reduction in trout numbers.

Today, my days are all about helping you become the angler you want to become. You will be as good as the amount of work that you put into it. If you backlash every cast and think it’s the reel, you’re mistaken. If you do not practice casting between fishing trips you won’t be any better the next time out. If you think ”X” marks the spot, you’re not getting any better. If you believe that the more water you cover the better your odds, wrong again. If you have to see them to have confidence in your fish-finding abilities, you’ll struggle often. Seeing them is great, don’t get me wrong, but there are more days that demand reading subtle signs than actually seeing fish.

There’s no secret lure, only secret little presentation tricks with the lure. Are you of the belief that you’d rather be lucky than good? Good luck with that one. If you only know a few areas each day that are holding fish based on the conditions for that day, you have work to do with your game. By the way, this is one that I am constantly working on. There is absolutely no way we can know where all the good areas are. I like searching for small, out of the way areas that concentrate bait as well as gamefish, and can be approached and worked correctly during difficult weather patterns.

So, what is my real job as your guide? Besides keeping you safe on the water, my job is to evaluate your physical capabilities, your skill levels, your expectations, and what you hope to come away with at the end of the day. I must have the ability to adjust to each individual’s capabilities and then place each in an area where they have equal opportunities. This is way easier said than done at times. What is soft bottom to me at 170 pounds might be quicksand to someone that weighs 250 or more. In my younger days I was openly critical of anglers who could not wade the soft stuff when the need arose. I am truly sorry for that and I am sure it was just a lack of confidence in my skills as a guide that allowed for those comments.

Today, I adjust, take what I have to work with, and try to do the best I can when fishing new clients who are focused on learning. I am more confident in my abilities to place anglers where their physical capabilities as well as their angling skills will provide the best odds for their success. I am continually working on my teaching skills so that I can better serve those that want to become better anglers. I am looking forward to many more years on the water with many of you.