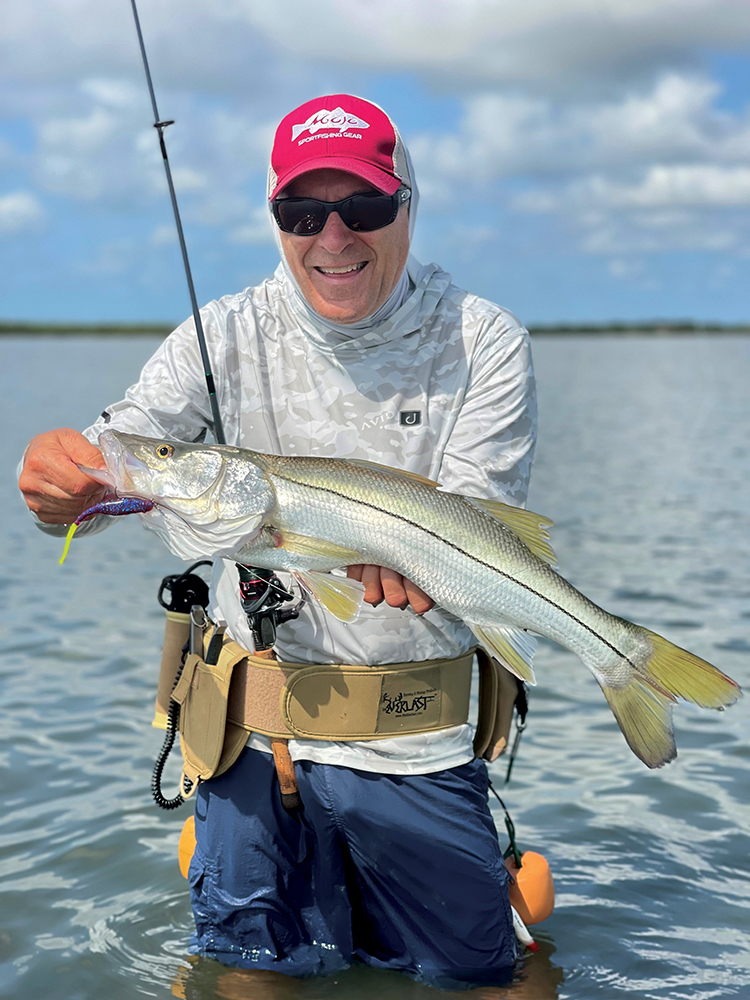 Jim Tienken with a solid Texas snook on a recent charter.

I want to begin by pointing out that I have never struggled so much in finding or catching fish in all my twenty-three years of guiding. Sure, there have been slow days in years past but never as consistently as the past two months. We caught zero keeper-size fish on several charters and worked hard for the little ones we did catch. I'm not saying there are no fish down here because we see plenty of redfish on the flats on calm days. There are however a number of factors making it as challenging as I have ever seen.

One of these is the summertime peak of boat traffic that scatters fish and puts them off normal schooling and feeding patterns. Another is the water temperature; 86° at daybreak and well into the 90s by midday; fish go deep and are harder to find. Floating grass is another problem that comes with elevated water temperatures. Challenging would be an understatement when attempting to work lures through it effectively. And let's not fail to mention that fish populations were definitely reduced during the freeze.

Curious to me is that fish haven’t been patterning like they usually do in summer. Many reliable places I could count on to hold fish over many years seem virtually empty this year. No longer can we count on that school of fish to return to a particular spot to spawn or whatever they did over the years. If the fish are there they are certainly few and far between.

TPW has extended the new trout regulations 60 additional days which should contribute to greater spawning activity through September. This and a generally more conservative attitude among fishermen will be a boost to the recovery. I have great admiration for many of my clients who have chosen to release all trout on my guided trips. It feels great having anglers say, “We do not want to keep trout today,” before the trip even begins. Thank you all for your conservation efforts.

September is regarded as a rainy month and tides rise higher as the month progresses. Cloud cover helps reduce water temperatures and back bays flourish on rising tides as local runoff delivers nutrients. Baitfish are naturally attracted to drains and adjacent shorelines, which means redfish will also become abundant in these areas. Back bay areas on the westside, both north and south of the Arroyo, should begin to hold lots of redfish. I also favor the eastside transition between the sand flats and the bottom grass this time of the year. As the water level increases redfish will frequent the sand and surrounding area to feed before the sun gets too high. Perhaps one of the greatest changes coming in September is the potential for reduced boat traffic as schools reopen and hunters begin to take to the fields.

The decimation of our trout fishery during the February freeze was never more evident than today. While we are experiencing three to four keeper-size fish on average there are also days when we catch none. The most reliable locales for finding trout have been in deeper water with the edges and drop-offs of the ICW being the best bet. Fishermen using live bait have been faring better than those using artificial lures, and even their success is highly dependent on water depth. Many small trout have been coming to hand and I want to remind everybody of the importance of careful handling to avoid injury. These smaller fish are the future of our fishery.

Flounder fishing continues to be a hit-or-miss situation. Most that we have been landing are purely incidental; they are too few and too scattered for targeted angling. On the other hand, snook numbers are improving after a rather late showing this summer. I attribute this mostly to the elevated water temperatures and also as a result of reduced salinity in areas most affected by fresh water runoff.

I will close by saying my goodbyes to Skipper Mock. Skipper earned legendary status as a Lower Laguna fishing guide of many years. He was a mentor and inspiration to many. I remember calling him when I first started guiding; “Oh, if I can only get four charters a month, I would be so happy." With a burst of laughter he said, "Believe me; you are going to get more than you ask for, and then some." I remember vividly waiting for him to appear at the dock and thinking to myself, "One day, I want to be just like him." Thanks for the mentorship and memories, Skipper. May you rest in peace!