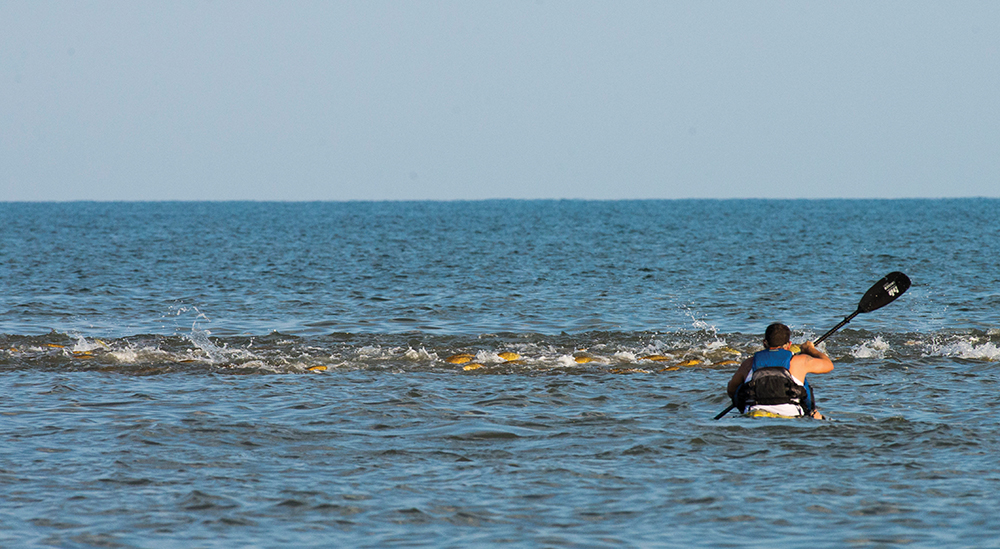 Here in the past month I have not been able to spend as much time on the water as I would like. Between work and bad weather, my fishing days have been very limited and, quite honestly, it’s driving me crazy. I have been filling my spare time with all things fishing-related; tying flies, watching videos of people fishing exotic locations and, most recently, reading a new book. Recommended by a buddy, I started The River Why, a coming-of-age story about a kid who was raised in the Pacific northwest by a father who is a renowned fly fisherman. So far it is a great book and if you’re looking for a good read, I would highly recommend it.

Leading up to this article, I was not completely sure what I was going to write about; lack of being on the water sometimes puts me in a slump. On top of that, and everything that has gone on with the freeze and the weather, I didn’t seem to have a lot of motivation. Procrastinating as always, I picked up my book and a few pages in I read something that I truly believe could not have come along at a better time.

Gus, the main character of the story, one day asked his father why he never kept fish. His answer was simple… “A dead fish will never strike a fly.” By releasing his catches back to the river, and encouraging others to do likewise, Gus’s father was doing his part to enhance the fishery and the sport of angling.

Often times when I am away from what I’m truly passionate about I reminisce days when fishing seemed almost unreal, memories I will cherish until my dying day. Days of 100+ fish and having been fortunate to catch trophy-size trout on Sabine. Yet in the grand scheme of things, my stories cannot even begin to compare with those of prior generations. One of my favorite things is talking to the older crowd and listening to their long-ago tales of fishing the Gulf coast.

One of the wildest stories I’ve ever heard comes from a buddy’s dad who recalled fishing with his grandpa and uncles on the beach at Bolivar. They dragged a seine net through the surf and pulled in well over 100 trout. He remembers shrimp, crabs and other fish mixed in the net, but the number of trout was astonishing. Vividly remembering one instance and recalling that his grandpa had a baby scale along and eyeballing what he thought was the largest trout – found it to weigh more than 13 pounds. A trout that size nowadays is hard to even imagine!

Last spring, I decided to get out of town for a few days and made a trip to Delacroix, Louisiana. This is one of my favorite places to fish in the world and I have never had a dull moment in that marsh. It is without a doubt the richest and healthiest ecosystem I have ever seen. Well, while fishing down there, I started talking to a few locals with hopes to locate a few soft shell crabs to bring home for supper. I found the right people and they invited me to their house to pick them up. Arriving at their place, I could not help but  start a conversation with the older couple. Both of them were well up in their 70s and I can almost guarantee that they get around better than I do!

Thomas Gonzales is a third generation fisherman and has lived his whole life at Delacroix. The only thing he has ever known is fishing. He began to explain how bountiful the fisheries were growing up in this part of Louisiana. He pointed to the marsh on the other side of the levee (which seemed to be about 2000 acres) and said that it use to be nothing but giant oak and cypress trees. Much has changed since then, there is only a small patch of oaks standing there today. He told me that during the winter, he and his brothers would go duck hunting. In a morning, they would load a truck bed full of mallards and drive them to New Orleans, where they sold them for a penny each to make extra money. He also told me of a time when he netted 5,000 pounds of redfish, returned to the dock to unload, and then went back out and did it again…all before his wife had lunch ready. These were just a few of the stories he had and I could have spent hours listening to him and his wife.

One of the more exceptional books I have had the joy of reading is Plugger. These are real accounts from one of the men who pioneered fishing with artificial lures on the Texas coast. This book is filled with story after story of Rudy Grigar catching hundreds of fish a day. These are instances that most of us can’t even begin to comprehend and he was doing it on a regular basis. I know that there are or were many other great anglers such as Joe Doggett, Billy Sandifer, and several others, that could tell stories for days about how the fishing use to be.

How it USED to be!

In their eyes, I know they have seen the decline in our fisheries and they know that it will never be back to what it once was. It may be great now, in our eyes, but it is not the same. I have seen a decline in my lifetime due to destruction of habitat and freak weather events but, with proper care and good conservation it will bounce back. I can only hope it will come back as strong as it once was.

When it comes to our fishery, my one true fear is that 40 years from now I’ll be telling my grandkids and their friends about some of the unreal days of fishing I experienced in my youth. Day’s like I mentioned above will likely never happen again. I can only hope that when I tell the stories that someone much younger than me can relate with a personal story of their own.

As Gus’s father was trying to explain, it is our duty as anglers to pass on the art of fishing. With proper care and the right attitude towards conservation, we can sustain our fisheries for years to come. If we don’t show respect for it now, from this point forward, everything will just be stories from yesterdays past.