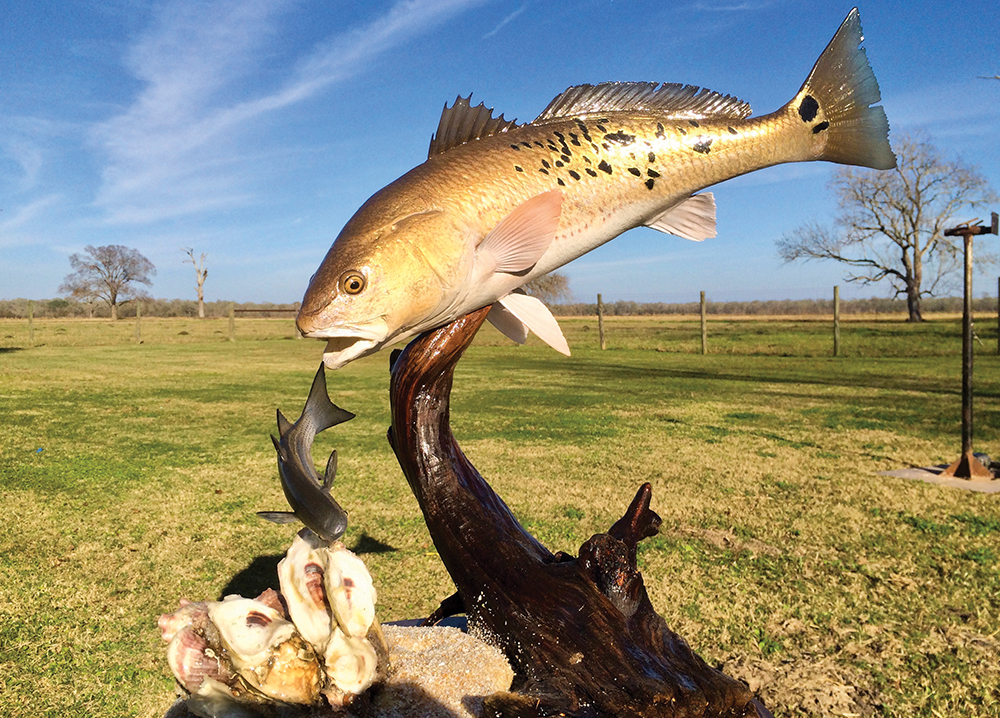 Brandon Zahn of Zahn’s Taxidermy in Boling does some outstanding work on both skin mounts and replicas.

I don’t care who you are, if you have ever picked up a bait or a lure and cast it into the water you have at one time or another dreamed of catching that fish of a lifetime. All along the Texas coast there are plenty of fishermen who are hoping that this is the month they will get a shot at that exact fish, the one by which all their other fish will be judged. There are few times better than the late winter and early spring to encounter a speckled trout of epic proportions, one that truly turns heads and causes other fishermen to turn green with envy.

Fish of such great size are often described as “trophy” and those fish can be of any length or weight as long as the angler deems it a trophy. The Holy Grail for many fishermen, as far as trout are concerned, can be of two measurements, 30 inches length or 10 pounds in weight. Those two numbers are the fishing version of what Boone and Crockett means to white-tailed deer hunters; it’s a recognized number by which all are judged.

Now don’t get me wrong, a 9.5-pound trout that tapes out at 29 inches is not a disappointment because it falls just shy of the coveted 30 and 10, it’s still a huge fish that is more than worthy of being called a trophy. If you catch a 5-pound fish and it’s the biggest one you’ve ever caught, then it should be looked at the same way. They are all trophies and should be appreciated as such.

Over the years I have been fortunate to put my hands on some really impressive fish, both from a length and weight perspective. I’ve had four of those magical fish that actually went 30 inches or better with two of them weighing more than 10 pounds. Early in my career as a guide I made a promise to myself that I would not have a trout mounted unless it was at least 30 inches long or weighed at least 10 pounds. Once I accomplished that goal the next step was deciding if I wanted to kill the fish and have it skin mounted, or release the fish and have a replica mount made. This particular fish was in great shape and I decided to release it and opt for the replica. The prevailing sentiment among most Texas coastal anglers is to try to release the bigger fish and that speaks volumes about how much the attitudes have changed over the years. In many ways Texas Saltwater Fishing Magazine has helped push that narrative by constantly preaching the good word about conservation and making that a high priority both on the water and in print.

Now once my decision was made to get a replica done, I was prepared for that occasion, I keep both a Boga Grip and a flexible seamstress tape in my gear bag for just such an occasion. The Boga Grip is perhaps one of the best tools available to get a correct weight on a fish; in fact the Boga Grip can actually be certified by IGFA if you choose to do so. The flexible seamstress tape will allow you to get a correct length and girth measurement of your fish instead of trying to guess or do it by some other means. All of these weights and measurements along with a quality photo will help your taxidermist recreate your trophy and give you the best representation of your fish possible.

I spoke to one of the best taxidermists I know, Brandon Zahn of Zahn’s Taxidermy in Boling, and he echoed those sentiments and also shared a few other tips with me. “Good measurements and a quality photo are critical parts of the process when someone wants a fish mounted, especially replicas. If someone wants to do a skin mount of a fish that may not survive or cannot be released they have a few other steps to follow after getting measurements and photos. Take those fish and gently remove the slime with a wet cloth then wrap the fish in a shirt or soft cloth before placing it in a bag and freezing it until the fish can be dropped off at your taxidermist” said Zahn. “Improperly stored fish and leaving them in the freezer too long are the worst mistakes I see people make,” he added.

Back when I caught my first trout that was “wall worthy” I figured I needed to go down south to find a taxidermist to take care of my fish, after all that’s where big trout were much more common. Much to my surprise a local taxidermist near me by the name of Harry Land absolutely blew me away with his work on some big trout and I was certain he was my guy. I waited a year to get that fish back and it was well worth the wait, it still hangs on my wall today and looks as good as the day I got it. Harry and I got to be good friends and I enjoyed bringing my son to his shop as he let him run around and would show him all manner of things that pertained to the artwork associated with taxidermy. Sadly Harry passed away years ago in a motorcycle wreck. I still miss those visits and wish he was still around because I still haven’t found anyone who painted like he did or had as many cool stories to share.

Now conventional taxidermy has long been the medium that most anglers have used to show off that trophy fish and there are some amazing representations out there. I enjoy going around during the boat shows or fishing shows and looking at the taxidermy work just to get ideas because there is always something new out there. I recently found an artist from Florida, Ross Curington, (@rosscurington on Instagram) who makes perhaps some of the most incredible fish replicas I have ever seen; they are true pieces of art.

Curington has been making these gorgeous replicas for the last five years and his talent has gained great notoriety on social media platforms. His work is not just another mount, it’s a piece of art unlike any other, it’s very unique. Curington does many different species of fish and displays them in a variety of settings and backdrops. I saw one of his speckled trout recently and I was just floored at the detail. “The kiln dried cypress makes these pieces perfect for display indoors or out, I just finished one for a guy who wanted to hang it in his outdoor kitchen and he’ll never have to worry about it,” said Curington. I can certainly attest that one of these gorgeous replicas will be my choice for my next big fish, just because of the uniqueness and detail, just amazing.

Well you now have several different options to take care of your next trophy fish and hopefully you have to deal with that dilemma this spring. The forecast is looking up for all the bays and hopefully we’ll get cooperation from the weatherman. If you do happen to catch that career fish, do your best to practice “CPR” Catch, Photograph and Release, if possible. Be prepared when you go out so you can get all your details, measurements, photos and such, then enjoy making the decision on how you want to display that fish and share your memory.

Chuck’s Reel Maintenance Tips: Get the Salt Out!