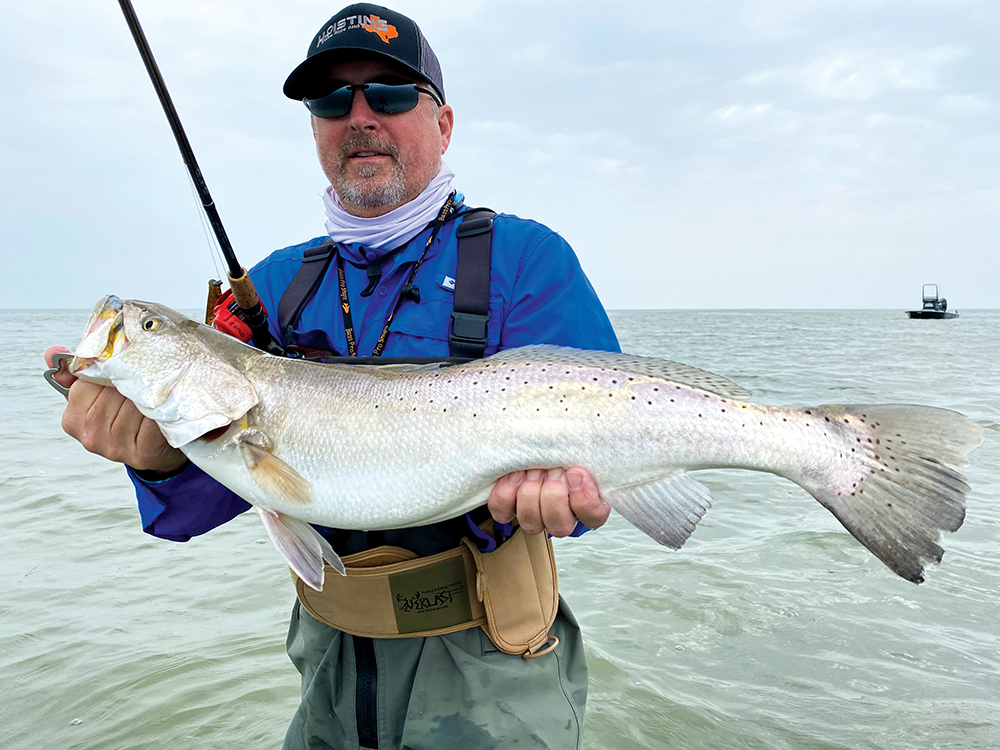 Jay Anderson with a gorgeous thirty-and-a-half…CPR!

We are about to receive a major arctic blast. Forecasts are all over the place but many models are calling for temperatures to drop into the low-teens. That’s not good for our fish, especially trout, as they become stressed when water temperatures dip into the upper-40s and can die if water temperatures remain at or below 45° more than 24 hours. Reds are a little hardier and can hold on until water temperatures drop to 40°, and maybe a bit below, but mortality increases after 24 hours.

We cannot control Mother Nature and worrying about it only places stress on us. I will worry but I will remain positive, knowing that I have survived the major freezes of ‘83 and ’89, along with brown tides, red tides, blue-green algae, seven years of drought, floods, and at least a hundred times greater fishing pressure.

We have some things in place that we did not have in ‘83 and ‘89. Namely, lower bag limits on gamefish species across the board. We also have fishing closures in deep basins and harbors to protect fish seeking refuge during extreme weather. We also have voluntary shutdowns of barge traffic in the ICW and other channels to help minimize the loss of fish seeking refuge. Big thanks to the companies willing to put the fish first for a few days. The front is now pushing into the area and I will resume writing after it has passed.

I’m back…February 21 and the big news is obviously the freeze. This article has become more difficult to write as we are seeing dead fish of all species beginning to float. It takes about 3- to 4-days for them to gas up and come to the surface. Some areas were impacted more than others but all systems have suffered losses. TPW will wait to make assessments until they are able to collect the proper science-based data.

Most of Texas was without electricity and water for 3 to 4 days. In Rockport and Port Mansfield we lost power for 4 days and water was on and off until power was fully restored. All of this was a hardship but let’s cut to the chase and I will tell  you what I have seen in the Rockport area several days after the warmup began.

First, we have lost a bunch of fish in many of the shallow backwater areas. These backwater areas comprise a small percentage of our total bay waters so, even though they are subject to higher losses, those losses are not representative of an entire system. Just so you know, TPW gill net surveys are not conducted in back lakes, sloughs or drains…main bay shorelines only. Losses thus far include all species of game and baitfish as well as sea turtles. Big thanks to the volunteers who participated in turtle rescue efforts.

During strong northers the wind pushes a great amount of bay water into the back lakes – a false tide of sorts. Fish will instinctively move with the tides and begin to feed up in advance of the front. When water temperatures drop drastically as they did on Feb 12 through 18, those fish become stunned and unable to move to deeper water. Heck, maybe they just don’t know to move. Nonetheless, they become extremely vulnerable to the bitter cold and many do not survive. We have seen this with just about every major freeze event that I have experienced over my 40-year career.

The flip side is that in other areas where fish have deep water access and deeper bottom structure, they move deeper much quicker and have higher chances of surviving. Our numerous deep harbors, subdivision canals, deeper oil field channels, and countless deeper coves and pockets also provide shelter during extreme cold.

I have seen numerous areas with scattered dead trout and reds but not the shoreline stacking I feared we would see. I also believe there are fish dead still on bottom that we will not see until later this week. We can only hope that the damage is not too severe. It is still too early to think that we have seen all that was killed but I remain optimistic due to the numbers of live and healthy fish that I have seen and videoed so far.

On Friday, Jeff Steckler, Jay Ray and I went south of Rockport for a look and Adam Nesloney went to the north. What we found was truly shocking but also fantastic in another way. We found large numbers of trout, reds and black drum moving up out of deeper water onto shallow flats that were warming. The water temperature was 47° when we set out and 48° to 49° by the end. Today, as I tweak this article for submission, our water temperature is nearing 55°.  By Monday we could see 60°, which is about normal for this time of year.

The Watkins boys will be practicing Catch and Release on speckled trout for the remainder of 2021. We feel that the trout population has been impacted the most, based on our observations on the water. This is something we are doing on our own and will harbor no ill-feelings toward any that choose to do differently.

For more than 40 years the fish in our bays have provided me the opportunity to provide for my family. For 17 years they have done the same for Jay Ray. For the past 10 years we have encouraged that our clients keep only fish they need and release all trout over 20 inches. The catch and release thing is not new to us and we feel that total catch and release of trout will allow the population that remains the opportunity to spawn and pave the road to a quicker recovery. If you’re inclined to follow us in this endeavor, we say kudos, and thanks for joining.

Now, let’s talk fishing because that is what we all want to get back to…

After the cold moves out and warming begins, we could see an extended time of recovery versus the normal shorter cold snaps. My years of experience and my observations of the fish I catch after super-cold periods tell me the state of the fish throughout the cold period. Three years ago we had water temperatures drop to 38° overnight and air temperatures of 28°. I know this because I went out and measured the surface water temperatures in an area I wanted to try to fish. I never got out due to the temperature readings and returned to the dock to warm and live to fight another day.

Over the next 10 days we experienced a slow but steady warming trend. As water temperatures warmed into the upper-50s and 60s we started seeing more and more signs of feeding and fish activity. I have already started seeing the same pattern after this most recent event. I observed more activity from the midday to afternoon hours than we did during the early morning hours. I expect to see the same pattern repeat itself in the days ahead.

You’ll notice that the trout you catch will have some noticeable blistering and bloody tails and fins. This is due to the fish being close to or actually on the bottom, bellied into the mud where parasites and small predators chew on them. Leeches will also be attached to the trout and reds that we catch. This tells us where the fish are in relationship to the bottom and this tells us where we need to have our lures.

I will use MirrOlure’s Lil John XL and original Lil Johns to probe the depths and locate fish holding in deeper water. Once the water temperatures warm and the fish move shallow, I will be focused on the same structures that I normally target. I am big on the small, what I refer to as satellite grassbeds and small potholes that border areas of larger grassbeds or sand pockets.

Trout, especially larger trout, want to get shallow to warm and feed after cold spells. Being highly opportunistic predators, I believe their instincts lead them to setting up on smaller pieces of structure where they can maintain a 360° vigil and capture prey with a minimum of effort. I say this because I have stood and watched them maneuver with only a slight roll of their tails. We can learn much from observation and those visions stay with us, allowing us to envision what is happening when we are unable to actually see it.

When working shallow water and smaller structures, I am a big fan of the Texas Customs Double D. This lure is very versatile and allows anglers to do whatever we need to do in order to draw instinctive or reaction strikes from trout and redfish.

We had a tremendous two-and-a-half day run of fishing the week prior to the freeze. All trout were over very small areas of submerged grass or in very small potholes. Floating grass was an issue for topwaters, Custom Corkys, and Custom Soft Dines. Double Ds and Lil John XLs on Texas Custom Jigheads both worked well in the heavy, floating grass due to the design of the jigheads and the ability of the Double D to be retrieved just beneath the surface and above the targeted grassbeds. During peak feeding periods it was a toss-up but the Double D definitely produced more strikes during the periods between feeds.

Over two days we had two fish longer than 30-inches and one measured 30.5 inches. We also had lots of 4- to 5-pounders, and only two reds the entire time. I know that is not the norm but it certainly felt good to set the hook, feel a heavy headshake, and have confidence that it’s not a redfish. I love reds, don’t get me wrong, but I am a trout guy at heart and target them about 90% of the time.

As we get back on the water in the morning; the fifth day of our warm up, we will do more scouting and less fishing while trying to further assess the freeze damage. We will be totally catch and release at this point in the recovery. I will end this article encouraging all of you to remain positive. I have seen signs in the Rockport area that are promising. I do encourage the catch and release of all trout and any other gamefish species if you can see your way to put the FISH FIRST as they try to recover from yet another historic event.