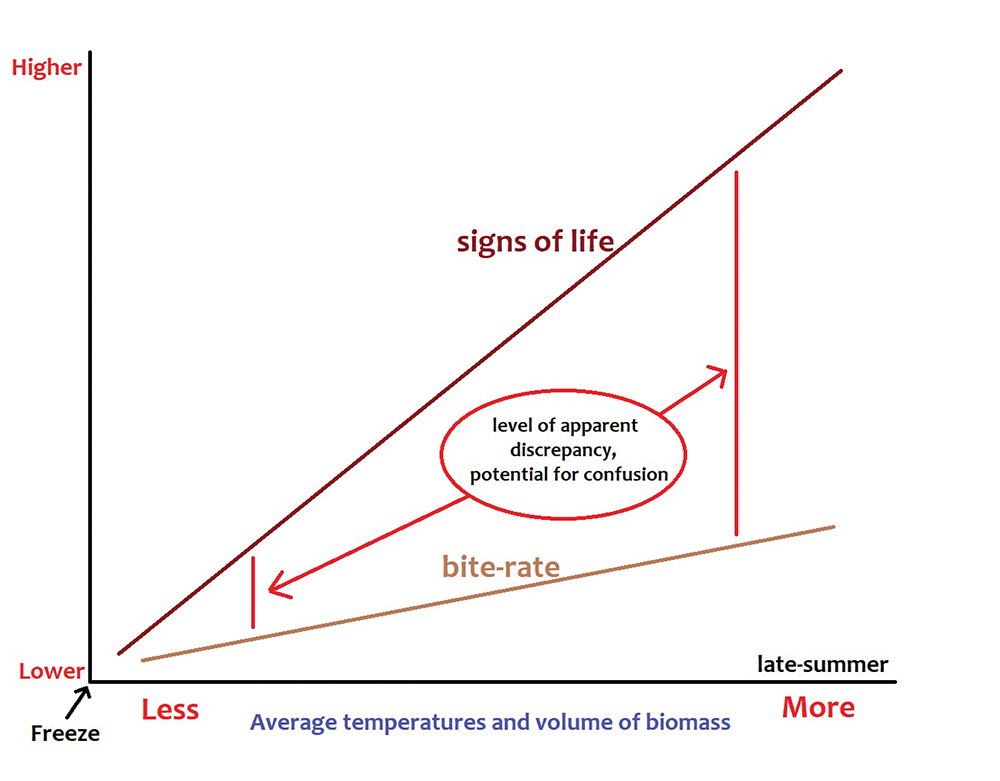 Over time, as more and more life forms populate the bays, the discrepancy between signs of life and bite rate will potentially cause greater confusion for anglers fishing in areas hit hardest by the freeze.

The first few times I headed out onto the water to run charters in the wake of February's killing freeze, I experienced a consistently unsettling reality. A kind of uneasiness about the viability of my daily operating principles and procedures cast a dark cloud over my thoughts. The anxiety related directly to my ability to make productive decisions about locations, how long to stay at selected spots, also lure choices and presentations.

I felt a palpable sense of confusion, one spurred by an acceptance of the facts related to the loss of fish due to frigid temperatures. I'd pull up to a place, observe a seemingly meager level of bait activity and other signs of life, follow up with what seemed an unusually slow bite rate, then realize I had no strong opinion about what those things meant. In many cases, I thought, “If this happened last year, on the same date, I'd be ready to move already, assuming all this isn't good enough. But now, I'm not really sure.”

Understanding the optimal ways to cope with an inherently tough situation suddenly made even tougher involves considering the main aspects of an all-important decision—the choice of when to stay and grind and when to raise the Power Pole and move to a new location. As I've written many times over the years, with increasing levels of complexity, anglers ideally use the analysis of five main factors to make this critical, often repeated decision: long-term reliability of the spot, recent results at the spot, observations of signs of life, bite frequency and catch rate, specifically of the desired size and kind of fish.

These five factors affect the angler's perception of whether the spot holds enough of the right fish to justify staying and making more casts. All these factors reside on what we might call a “slide rule,” meaning they vary from season to season, with different weather conditions in play, even from moment to moment, within a given day. For instance, expectation for bite frequency in January falls well below the level predicted in June. Additionally, the type and size of the spot chosen affect these factors, meaning, for example, a relatively large expanse of water with many similar features inherently deserves a longer test than a micro-spot defined by a small structural element.

Thinking about how a reduced number of fish in the body of water affects each of the five main factors contributing to the “move or stay” decision helps one draw conclusions about the most effective ways to cope with the situation created by the killing freeze, at least in the relatively near future. A reduction in number of fish affects some of the factors more than others, in obvious ways. In the end, two main truths emerge.

With regard to using the long-term track history of a spot to make a decision about how long to test it on a given day, one must accept the facts related to the altered meaning of the data.  Results earned prior to the freeze provide potentially deceiving thoughts about the potential productivity of the spot after the chill, in terms of precisely how many bites one should expect to earn within a given span of time. But, long-term track record does indicate a general propensity for the spot to hold fish within the time frame, given the prevailing weather and water conditions. The reduced number of fish didn't cause some spot to suddenly become less likely to produce, unless the spot lies within a general area hit hardest by the freeze, mostly meaning a vast expanse of shallow water. Avoiding spots within enormous shallow flats in the weeks and months following this event clearly makes good sense.

As does closely factoring in the recent track record of a given spot, once one develops. This part of the puzzle doesn't really change much as a result of a sudden reduction in number of fish. If a place has a relatively high bite and catch rate one day, and a lower one the next, with the same general conditions in play, assuming it holds fewer fish becomes somewhat safe, as does assuming it holds plenty if the catch rate runs relatively high. The key word here is relatively, meaning both bite and catch rates will likely run at low average values for some length of time, compared to long-term averages, given the low levels of biomass present in the bay systems today.

Certainly, when a freeze kills a bunch of fish and other marine life, one should reduce  expectations about how many signs of life one expects to see in a given place at a given time. This part of the puzzle will likely confound many anglers, who will potentially keep looking for signs commensurate with what they've long become accustomed to seeing, denying the truth of the current situation. Others might recognize the significance of the presence of a relatively few of the right signs of life and use them to target the smaller number of fish more effectively.

The presence of fewer fish certainly lowers the expectation with regard to bite frequency.  One simply cannot expect to earn as many strikes with less fish to target. Similarly, one will not expect to catch as many of the right fish, with fewer of them swimming around. All these facts increase the likelihood of the average angler falling into two related traps, which inevitably exacerbate the difficulty of the endeavor.

Taken to the extreme, zero fish swimming within the angler's scope eliminates any ability to test a lure or presentation; a million casts made into a backyard pool will bring no speckled trout to hand. Conversely, if an angler stands in the middle of a vast school of ravenously feeding fish, a scrap of a flannel shirt impaled on a hook and trolled through the water might draw repeated strikes.

If one puts the Power Pole down in the midst of an ample number of fish, then proceeds to throw the wrong thing at those fish, one might reach a flawed conclusion about how many fish swim within reach and consequently about whether staying makes sense. This happens to some anglers more than others. Anglers who best understand when each type of lure in the arsenal makes the most sense to deploy will benefit more from an extended testing of the lure than those who make their choices without proper, rational reasoning, or who simply “throw everything they have at the fish” every time out, in a search for what I like to call a magic bullet. Water temperature, water quality, season, time of day and other factors determine which lure/presentation style stands the best chance of working at a given moment.

Most people, when confronted with the reality of relatively scarce signs of life and low bite frequency will switch lures too much, without giving each a fair chance to produce, and worse, they'll start moving around too much, searching for a Katmandu that doesn't exist. Many already showed a tendency to fall into this trap before the freeze reduced the number of fish available to them. In some cases, their irrational, non-productive decisions about lure choice and presentation partly urged them to run around like a dog chasing its tail.

In the final analysis, the mechanisms which best serve anglers in the quest to cope with the effects of the freeze become pretty simple, though they're certainly part of a complex endeavor. In order to increase productivity in the new world into which we've all been forced, anglers should rely more than ever on the results of the past to choose locations, while considering the obvious effects of the freeze. Making sustained efforts in spots with proven track records which lie in close proximity to deep holes and basins where fish likely survived the deadly temperatures makes perfect sense. When on the water, anglers must also properly adjust their expectations to acknowledge the reduced biomass and signs of life, in order to successfully execute plans.

This reality will almost certainly change in a significant way, first in places which lie in close proximity to passes connecting the bays to the Gulf. In those locations, many species of fish and other marine life will make their move from the depths of the ocean into the shallow confines of the estuaries while spring turns to summer. As they do so, the signs of life in and around the passes, and eventually all over the bays, will return to what feels like a normal state. Then, the low bite rate will surely feel out of kilter to anyone with ample experience, potentially causing them to change their perception of when to stay and when to move.

Over both the short-term and in the long run, anglers who avoid the tendency to move around all over the place and switch lures constantly will fare better than those who make measured decisions about location, lure choice and presentation. At a minimal level, in the near future, properly adjusting to the new reality means staying at a spot at least as long as one would have prior to the freeze, even when doing so seems or feels wrong. Similarly, the number of casts made with each lure and presentation should remain the same as before the freeze or increase, in order to provide legitimate results when testing efficacy.

Ironically, captains who experience a sense of uncertainty while trying to assemble the puzzle on the water these days have an advantage over those who don't.  People who acknowledge the effects of the event and rely on the legacy of successful fundamentals can wage a better battle against the tendency to make hasty decisions. These days, more than ever, consistent productivity requires more than skill and knowledge; no other element carries more value than patience.

Soft Plastics Basics: In this video, the captain makes a basic statement about when to use each main type of soft plastic lure.