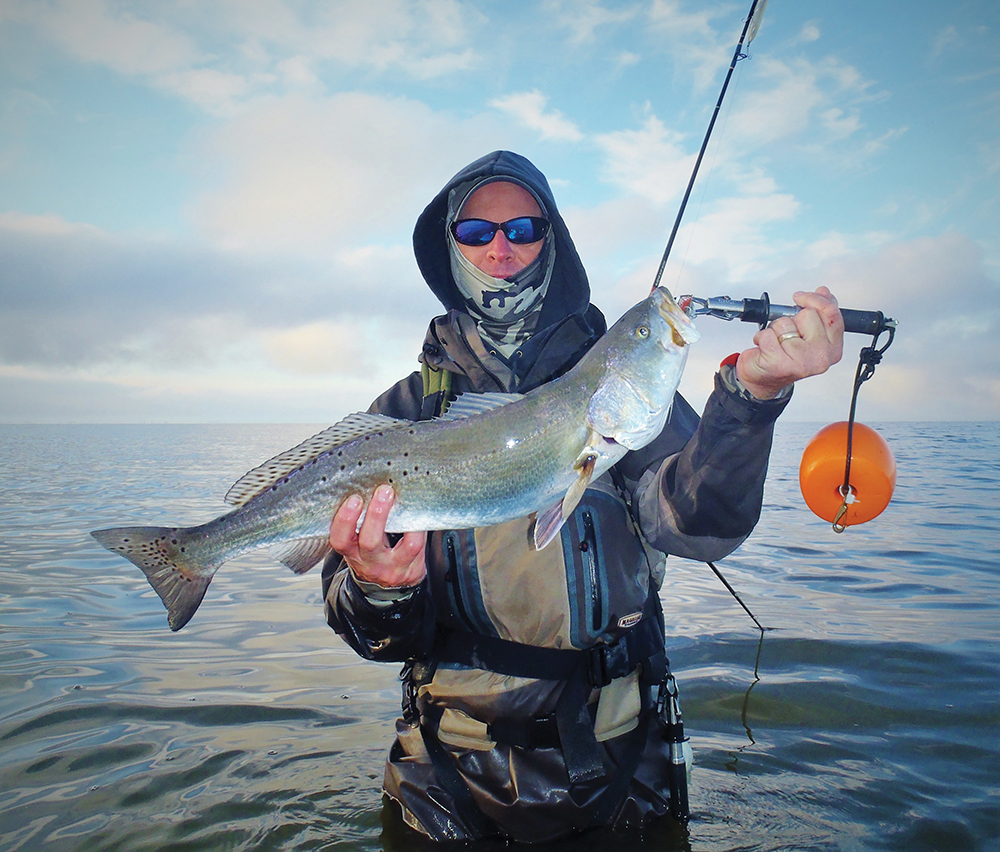 Scott Bryant caught this trout during the winter holidays, providing evidence of the excellence of the time frame.

When they decided to fish tournaments, Billy Dobbins proclaimed himself captain of the crew. This came as no surprise to his teammates, friends, and followers, all of whom call him Brat. Barely five feet tall, Brat drives a monster truck the color of midnight, with fat, knobby tires, and black spoke rims. His go-fast boat has enough horses hanging off the transom to run a rodeo; it passes the others in a blur, trailing a shiny white rooster tail like a superhero's cape.

Though Brat will never admit the fact, everyone else recognizes the best fisherman in the crew—Billy's younger brother Bobby. Bubba Dobbins refuses to use bait. He never carries a net, almost always throws soft plastics. If pressed, Bubba utters his simple mantra in a deliberate drawl: “All I need is a drop.”

The Dobbins' third wheel, Wesley Akers, doesn't fish nearly as much as his two partners. Mostly, he agreed to join the crew so he can say he runs with the cool kids.  On the web, he likes to brag when the results of an event allow it. Ol' Country Akers never misses an opportunity to comment about something controversial on Facebook; he enjoys the stress his caustic remarks generate. When fishing with his boys, he tries to follow Brat's orders, though he doesn't always remember exactly what he's told.

During the last tournament of the summer in the year after Covid came, things didn't play out the way Brat planned them. Like many others held these days, the event allowed each team to weigh one trout, one red and one flounder; the highest combined total weight would decide the winner. They could split up after leaving the dock, but had to embark and return together.

After the captain's meeting, Brat told the others what he intended to do, like he always does. After launching in the line near the JFK Causeway, he'd drop Bubba off on a spoil south of Bird Island, to try to get the right red. Then, he'd race into and through most of the Land Cut, where he'd leave Country at the end of the channels in El Toro, with a bucket of live croakers, to try to pull a big trout. The skipper's run would end near Gladys Hole, where he would also work on the trout. Around the middle of the day, he'd come back for the other two, and they'd fish together for the flounder, on the way in.

When Bubba donned his gear and prepared to jump off the boat beside the shallow hump lying alongside the ditch, his older brother picked a gold spoon out of a container on the console and offered it to him.  Bubba shook his head and grunted; Brat hissed and tossed the shiny lure back into the cup. They needed no words to solve the dispute, one they encountered in every event. The younger Dobbins would contend he didn't need no stinkin' spoon; he'd get the job done with the trusty pack of paddletails in his shirt pocket.

Bubba did notice the bungee cord wrapped around one of the hydraulic anchors when he hopped off the deck and into the lagoon.  “You didn't get that fixed?” he asked the captain. “The guy at the shop said the parts are on backorder, but it don't matter. We fished for years with just one anyway,” Brat answered, before lifting the other anchor and busting off.

Standing beside the ditch in El Toro, Country could still hear the roar of Brat's motor moving off when he spotted a tall wake, then watched some bait fly out of the water, just outside his casting range. He could tell the fish causing the ruckus wasn't likely a trout, but curiosity got the better of him. After all, he had all morning to get a good trout. As quickly as he could, he replaced the gear on the end of his line with a soft plastic and chunked it past a mixed raft of frantic mullet, ballyhoo, and needlefish.

When the lure passed under the bait, near the precise place where he'd seen the previous explosion, the anticipating angler felt an improbably hard whack and set the hook. In a nanosecond, all hell broke loose, and whitewater flew from one side of the ditch to the other, propelled by the head of an agitated Silver King. Country had no experience catching tarpon, but any idiot would recognize one by the flexing fury of its flared gill and the silly size of its eye. When the perturbed predator tasted the hook, it sped past the man with a whoosh, determined to escape the cramped confines in which its feeding routine had been so rudely interrupted.

Before the dude with the suddenly wrong rod could do anything to try and stop it, the powerful fish stripped every inch of line off the reel, snapped the knot and left him with a spinning spool. Stunned, he cussed out loud, and his chin dropped to his chest. He now had no way to fish until Brat returned with the boat and his backup rig, which he had left in its holder, figuring he wouldn't need it. Mumbling under his breath, Akers freed all the croakers from their plastic prison and crawled under a shady brush pile to hunker down.   Swatting at biting flies and sipping tepid water from a bottle all morning, he felt like a pioneer lost somewhere in the Sonoran Desert in an old Spaghetti Western.

South of him, Brat hit the button on the remote fob to set the anchor when he reached the proper point upwind of the juicy set of potholes not far from Gladys Hole, where he'd been catching some really solid trout all summer. The pump on the anchor failed to activate. Figuring he had a weak or bad fob, the young man pushed the button several more times, then tried the switch on the console, but got the same results.

The motor would work to move the pole up, but not to send it down. Never much of a handyman, Brat didn't realize he might be able to move the relays around and save the day; he did know enough to accurately predict he had a relay problem. When he looked at the tangled strands of wires and switches, he could see plenty of crust and corrosion.

“Oh well,” he said aloud to himself, acknowledging the fact he no longer carries a conventional anchor. “I guess I'll have to catch 'em on the drift.” Before rigging up the first croaker, he looked at the depth reading on his GPS to confirm what he already knew—even Sasquatch couldn't wade this spot.

Brat did start catching some trout while making slow drifts through the sandy spots breaking up the grass; a couple measured just over the minimum of twenty inches required to weigh them. He began to believe he'd find one of the bigger trout he knew likely swam close by. But as he culled a fish from the live well at the end of a drift, he watched another angler idle into the area upwind of the sweet spot, put both spikes down and block access to the spot.

The captain of the crew did his best to find another set of potholes holding a trout of the kind they'd need, but he failed, and when he ran out of croakers, he raced back to El Toro to get Country. Parched and embarrassed, Akers laughed when he told the boss what had happened; Brat didn't crack a smile.

When they approached Bubba on the shallow spoil, they could see he had a red on his stringer. As they got close, they could tell it stretched into the middle of the slot, at best.

“Shut up. Just shut up. I found plenty up shallow early. Musta caught 20, but most were barely legal. Had three or four like this one, about 25. After the bite died down on the spine, I saw a school of bigger fish out deep. But when I tried to wade out there to cast at 'em, the water was up to my tits, and the bag of worms musta floated out of my pocket. Anyway, I turned back. Caught like a dozen more small keepers up here on this.” He showed his two teammates the fuzzy, inch-long remnants of the only worm he'd thrown all day.

Country chuckled again; the captain did not.

“I guess it's all on the flounder,” the leader of the crew said. “Let's go find us a slab.”

Before the three lined up on the edge of their favorite channel running off the ICW to begin working paddletails along the edge of the drop-off, Brat offered his brother a landing net. Bubba smiled wide, refusing it; Brat hissed again.

The younger Dobbins noticed the water wasn't moving much. “This is gon' be tough,” he predicted, shaking his head.

“Country, remember what I told you. Don't step off that edge. The bottom's like pudding. And I ain't jokin',” Brat warned the third wheel.

After an hour passed with only a couple bites and misses for Bubba, none for the others, Brat returned to the boat. Bubba heard the “psssst” when a beer can popped.

“What the hell?” the younger brother asked. “You know we ain't supposed to start drinkin' 'til after we weigh our fish.” Country giggled; Brat drained the can in one long chug.

Moments later, Bubba felt a sharp tap. He waited a couple seconds, then went full-on Mike Iaconelli on the fish. After winning a short fight, he succeeded in pulling the long, fat flatfish in close. As was his custom, he grabbed his stringer, intending to impale the fish on it.

When the flounder appeared sluggish enough and came to the surface right in front of him, Bubba took dead aim and stabbed at the center of it as hard as he could. Truth is, the spike on his stringer had dulled over time, and it failed to penetrate the fish's flesh.  With desperate urgency, both ends of the flounder's body shook in spasms, creating a slushing, shimmering orb of foam, which engulfed and temporarily blinded the man. As often happens, the hook pulled out, and the potential prize pig disappeared into the depths, free again.

Wesley Akers had turned to take a look. “Hey Brat,” he sheepishly said, breaking the new silence. “Bring me one of them cold beers.”

“Ha,” the captain snapped. “Come git it yourself.”

“Can't. Both my legs are stuck in the same hole in the puddin'.”