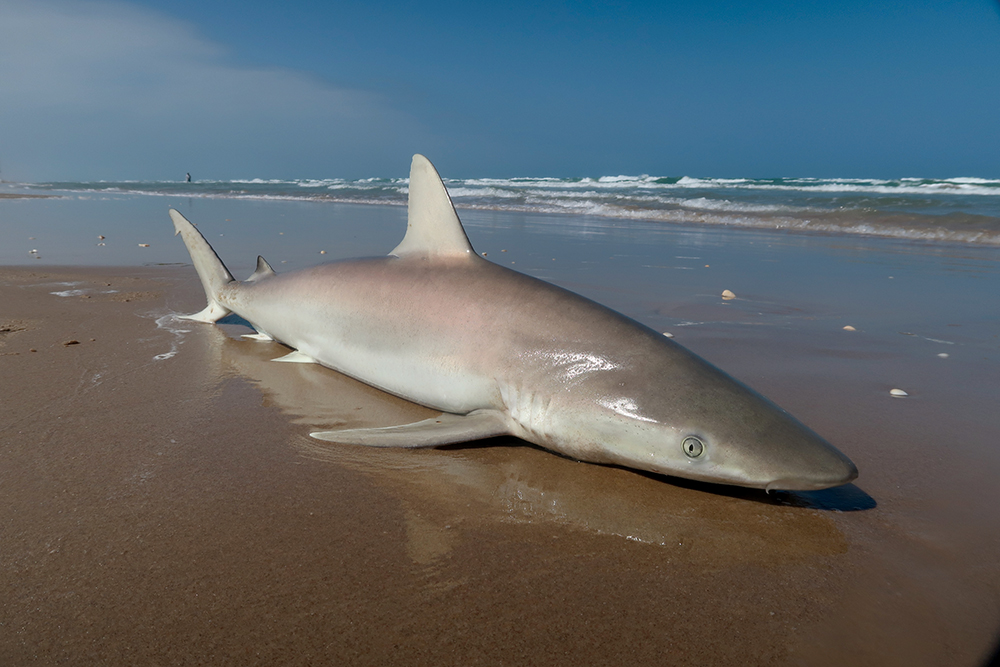 The blacknose shark is one of the least common shark species in Texas waters.

The Texas coast is home to many types of fish.  Among them, at least 15 different species of sharks have been caught from the rugged shores of our unique surf, some of them diminutive, others ranking near the top of the list of largest predators with fins.  Some sharks inhabit Texas waters year-round, while others occur seasonally.

The most common sharks along the beachfront are the medium-sized ones like blacktips, bulls and spinners.  During the summer months, the larger tigers, great hammerheads and lemons prowl the shallows.  In addition to these, several smaller species inhabit the surf-zone, searching for bite-sized prey.  The Atlantic sharpnose, the common bonnethead shark (a micro-member of the hammerhead family), the finetooth and the blacknose shark are all often misidentified as young blacktips or lumped together under the generic label “sand sharks.”   All these little sharks serve great purposes in the ecosystem, and they provide plenty of fun for the anglers who catch them.

In general, sharks feed with voracious appetites.  While most are purely scavengers, some speedy species do chase down live or injured fish.  Larger sharks often find food sources like full-grown stingrays and begin to feast. Even if the stingray weighs 100 pounds or more, some sharks will persistently try to eat all of it, piece by piece, bite by bite.  The biggest men in gray suits can consume entire rays (or large fish) after munching tirelessly on them.

Some of the smaller types of sharks willingly gorge themselves too.  It's not uncommon to catch a four- foot sharpnose on a five or even ten-pound bait.  While attempting to ingest such a hefty meal, small sharks repeatedly and rapidly take pieces of the bait, in some instances biting the hook.  It's sometimes amusing to see how ravenous appetite causes a ten-pound shark to become hooked on a bait intended to draw the attention of a beast weighing 500 pounds or more.

Of these smaller species, the Atlantic sharpnose sharks are present throughout the year, but are most easily caught in the cooler months, like the larger sandbar sharks.  The Atlantic sharpnose is a widespread Western Atlantic species found from Upper New England down to Mexico, and is plentiful in the Gulf of Mexico.  They attain maximum lengths around four feet.  At times, head-boats departing from Texas ports return to the docks with more sharpnose sharks than red snapper.

Bonnetheads are another species of feisty little sharks found in Texas waters.  The smaller cousins of scalloped and great hammerheads, two of the largest predators in the ocean, bonnetheads attain maximum lengths similar to sharpnose sharks—about four-feet.  A wildly interesting process of evolution has shaped this, the smallest shark species found along the beaches of the Lone Star State.  Unlike their larger cousins, which have nearly straight hammers at the fronts of their heads, bonnetheads have more curving, shovel-shaped heads.

They use their rounded hammers to pin small crabs, shrimp, and fish on the bottom before scooping them up in their mouths.  Present in decent numbers throughout the year, they can be really thick in the surf during spring.  Anglers often catch bonnetheads incidentally, while targeting whiting or pompano with light-weight baits like Fish-bites or dead shrimp.  These sharks average three feet or less in length, but put up amazing fights for their size.

Finetooth sharks, slightly larger than bonnetheads, also swim in Texas waters throughout the year.  They rank at or near the top of the list of most frequently misidentified sharks. Typically, finetooths look almost uniformly gray, with a faint, bluish hue.  Their flanks show no real marks or patterns, just a grayish gradient.

Many anglers may confuse them with spinners, blacktips and juvenile bulls.  Finetooths rarely exceed five feet in length, but have huge, seemingly endless appetites, often taking medium-sized baits intended for much bigger predators.  When present, they can be caught on cut or whole fish like whiting and mullet.  Like all sharks, they fight admirably for their size, providing anglers a blast when caught on light gear.

Among the least common small species of sharks in Texas waters are the blacknose sharks, which attain maximum sizes similar to finetooths.  Anglers mostly encounter them during the seasons of spring and fall.  Since many folks have never seen a blacknose shark, they struggle to identify them when they catch them.  Like the finetooths, blacknose sharks show no real patterns or strongly contrasting parts.  The main way to identify a blacknose is to couple their faint mustard color with pectoral fins bearing white trailing edges.

For their size, these sharks have large, triangular teeth, which they use to efficiently take chunks out of durable baits, often feasting on large baits until they become hooked.  At times, during spring, blacknose sharks move into the shallowest waters fronting the beach, crowding into the first gut.  When this happens, anglers can start fights with them by tossing out half or whole whiting impaled on 9/0 to 16/0 hooks.

The presence of a wide variety of fish, including a diverse collection of sharks, enhances the beauty of our Texas saltwater fishery.  Some people chase numbers of species, and enjoy catching different kinds of sharks to bulk up their lists.  Youngsters just love the thrill of battling uncommon species with sharp teeth and legendary reputations.  Atlantic sharpnose, bonnethead, finetooth and blacknose sharks offer great value to both these crowds.

Small sharks can't put up much of a fight when hooked on big baits and heavy tackle, but they prove admirably energetic when hooked on light tackle.  On my charters, these toothy critters provide great opportunities to educate people not just about the small species, but also shark anatomy in general.  While I mostly thrive on the pursuit of hanging into massive monsters like tigers and great hammerheads, I still have my share of fun with these little sharks while waiting on the big boys.