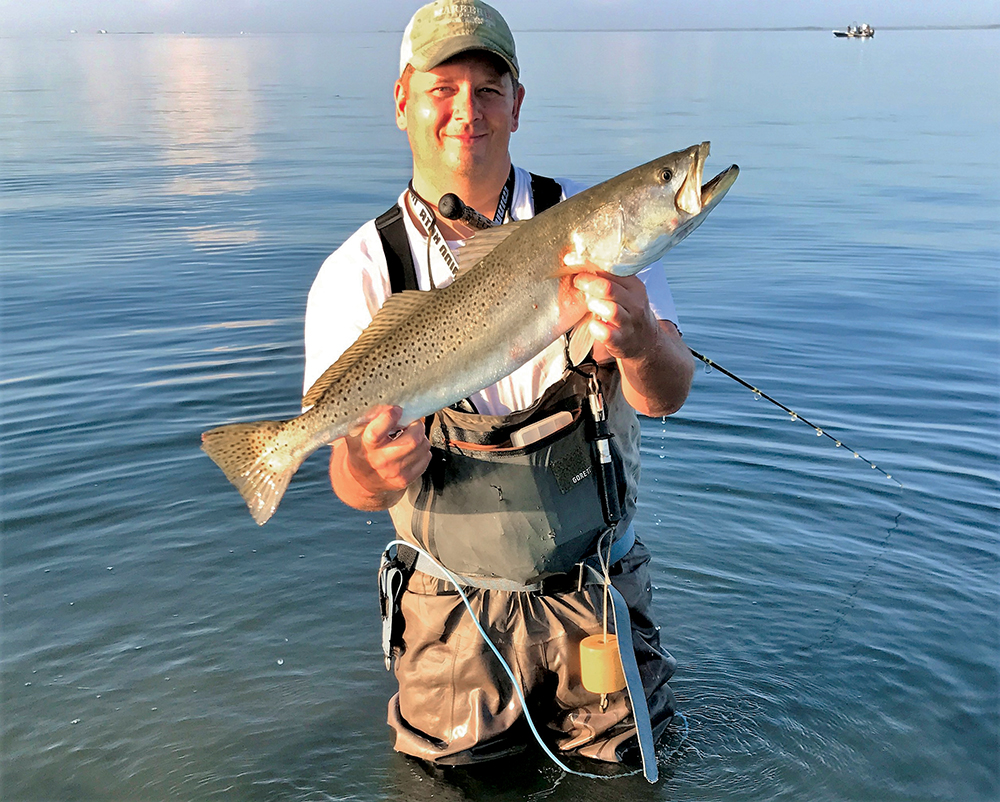 October isn't the best month for catching monster trout, but Jason King proved they do sometimes bite in the Halloween month.

I've warned my customers about the monster many times, written about it on the pages of this publication too. Normally, I utter the name of the beast while we work through a slow stretch of fishing and the bite rate runs low. Then, I encourage those under my tutelage to avoid operating in what I call autopilot mode. By this, I mean I want them to consciously strive to fish in a mindful state, specifically with regard to the presentations they make with the lures they've chosen.

On average, when the catching falls to a low rate, anglers surrender to the might of the monotony monster and begin repeating the same presentation over and over again without even realizing they've done so. This phenomenon occurs naturally, when boredom dulls the senses. Sadly, fishing in autopilot prohibits any chance of maximizing productivity.

In some contexts, autopilot proves useful. Airplane pilots use it effectively; setting the plane to fly itself allows them to monitor all systems in play, without the distraction of consciously maintaining speed, altitude and heading. Similarly, a person driving a car down a dry, straight highway can set the speed, then devote all energy and attention to controlling the direction of travel and avoiding unexpected hazards. These scenarios don't translate well to fishing with artificial lures, though. Maintaining a mindful state and contemplating the various subtle aspects of presentation elevate the attempt to urge strikes from finicky fish.

Recently, I realized something important about the complex anatomy of the monotony monster. This destructive entity has many faces, all of which serve the same purpose – to blunt anglers' efforts. When allowed to fully flourish in the lives of folks who spend time and energy fishing the coast, the creature can wreak havoc on multiple fronts. The negative effects of its powers even express themselves before an outing begins.

Often, anglers develop bad habits with regard to choosing the locations where they fish. We all do this to some extent; in its worst form, choice of locations begins to resemble making a milk run, stopping off at the same places every time out, without much thought or planning.  Undoubtedly, this is a form of mindless repetition, a kind of tunnel vision. Operating this way  serves the pernicious desires of the monster to minimize productivity.

In a similar fashion, anglers often fall into the trap of making all or almost all of their outings within the same time frame. For some, this means heading out in the minutes prior to dawn and fishing until mid-day. For others, it means something else. Regardless of whether the angler usually fishes during the day, early or late, or at night, falling into the trap of always fishing the same hours makes little or no sense, compared with the more thoughtful, creative plan of adjusting fishing times to meet the expected demands of the moment.

Just as certainly, anglers who always fish in the same ways when they reach their angling destinations play right into the hands of the multi-faceted demon. People who always drift, who always wade, who always fish with the wind, or who start with the same lure every day make a basic mistake. As if hypnotized, they dance to a tune played for them by the boredom beast, taking steps predetermined and choreographed by their inability to stay present and adjust all aspects of what they're doing to maximize the potential for catching in a constantly evolving environment.

I will not imply these anglers have no weapons to use to evade the pervasive effects of indifference. Surely, through thought, effort and mindful calculations, we can all minimize the risks presented to us by the tendency to do things in clumsy and entirely predictable ways. In my estimation, fighting the disastrous desires of this demon starts in the home, at the computer or other digital device, through study of satellite imagery.

The first and perhaps most important way to eliminate the tendency to become overly repetitive in angling endeavors is to learn more about the bodies of water in which those endeavors occur. This means learning new places to try. It also means contemplating how weather elements will affect them, making predictions about how the water will look, how choppy it might be, the depth of the tide in a given situation, perhaps all these things. After studying images on the screen, the next step involves pointing the bow of the boat toward them long enough to reach them and give them a chance to produce.

While on the way, this might also dictate making a conscious decision to pass by other places on the aforementioned milk run. It also necessitates fighting the tendency to return to those places too hastily, if the efforts in new spots don't produce quickly. Falling back on familiar places when the going gets tough makes sense at some point; doing so too often and without giving new places a fair test makes none, when anglers fish with the goal of expanding their knowledge of the waterways. Ironically, this part of the process reveals something significant about the monster's methods.

Most of us have driven the boat right past primo fishing spots many times before we ever stop and try them – because we're on the way to another spot, one known to us. No doubt this mindless tendency renders us partially blind and diminishes our potential in the end. As does always leaving the dock at precisely the same time when we go fishing.

Some fishing guides have a notoriously hard time shaking this habit. For some, the leave time doesn't matter much. Guides who fish for speckled trout using live croakers during the warm season catch their limits on a high percentage of outings, regardless of the time of day in which they make the efforts. So, they apparently prefer simplifying things by consistently meeting their customers at the same time and place every day.

Guides like me who fish more during the cooler half of the year and who never use live bait cope with a more complex reality. We find a greater need to acknowledge how weather, celestial elements and water conditions affect our ability to catch the fish we target and adjust our fishing times to either take advantage of the ripest opportunities for catching, or to minimize the negative effects of some aspect of the situation which hampers our chances.  The latter truth also applies to weekenders and developing novice anglers.

People would certainly benefit from looking carefully at tide charts, the times of the rising and setting of the moon, weather forecasts and other elements which influence the situation, then base their choice of fishing time on predictions about when the fish will likely bite best. In winter, this might mean heading out midday and fishing into the warming afternoon hours while a rising tide sends water into the coves in an Upper Coast bay, or leaving the dock late-afternoon to fish through the gloaming and into the early hours of night in the Laguna Madre, when the water runs stupid clear. It might also suggest pulling up to the bollards at the Bolivar Flats in the middle of a hot summer afternoon, allowing just enough time to walk to the outside edge of the flat in anticipation of the tide turning to fall out.

In all these ways, a thoughtful angler tries to take advantage of some perceived advantage granted by the choice to fish during a specific time frame, after consideration of multiple parts of the equation. This manipulation of fishing time resembles another way anglers can push back against the weight of the monstrous effects of monotony, by consciously attempting to avoid making decisions about strategy, lure choice and presentation style, without thinking about the subtleties of the situation.

This might motivate one to try the windward side of the bay instead of a leeward pocket, maybe softly shuffling and casting sideways to the wind, not marching and casting straight down the breeze. It could justify testing a topwater when doing so seems awkward, maybe ditching the topwater for a soft plastic, to acknowledge the perceived truth of the need to do so. Surely, it requires thinking about how the water qualities, bait activity, aspects of the weather and other environmental conditions define which type of presentation will likely produce best, rather than just working each lure the same ol' way every time it's tied on the end of the line.

This brings the discussion full circle, back around to the most obvious way the monster squelches productivity. Anglers who succumb to monotony's might wallow in a silly form of self-pity, mindlessly repeating presentations which resemble a maddening brand of music, a sad tune which echoes a single note ad nauseam. On the other hand, those who stand strong and fight can channel some inner angling virtuoso and execute a more satisfying song, wielding subtle adjustments to speed, rhythm and depth to defeat the beast.