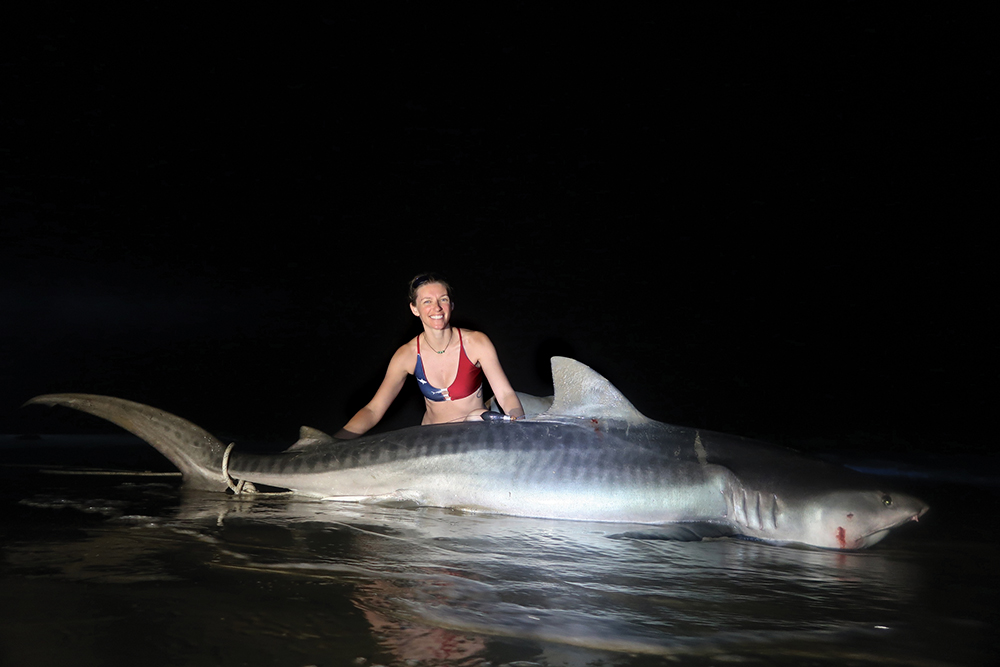 For dedicated shark fishermen, it seems twelve months culminate in one epic moment in time.  At the end of every summer, mega beasts which star in anglers' dreams reach their peak of abundance in the surf.  In mythical proportions, these monsters exceed even the beefy bulls and lightning quick hammers; no sharks move the hearts of more anglers than giant tiger sharks, the undisputed kings of the Lone Star State's coastal waters.

Mature tigers are our longest, heaviest sharks, and they have appetites which match their impressive size.  Texas has been home to these magnificent creatures since the dawn of time, and every summer they make their presence known to people who venture down to the beach to try and encounter them. This is the only shark species I've dreamed of catching which also haunts me in my nightmares.  All committed shark hunters have a thing for monster tigers; the obsession we know as shark fishing singularly leads to this very species.

The seemingly magical allure of these apex predators stems from their size, appetite and appearance.  Most tigers landed on Texas beaches measure at least seven feet in length, many closer to nine or ten.  Folks sometimes wrestle giants measuring twelve feet or more onto the shore!  Whether a seven or a twelve footer, a tiger is a tiger, and most anglers experience ecstasy when landing one.  Smaller tigers look more attractive; they have more vividly colored stripes.  The awe-inspiring heft of the big ones provides an entirely different kind of thrill; landing a smallish tiger and landing a massive female are much different angling feats, but any photo of an angler with a lit-up tiger provides a lasting, unforgettable memory.

My personal history with tigers goes back many years.  When I first got into the sport, I considered catching a tiger to be the pinnacle milestone for a career.  Landing my first one felt like earning a badge of honor, winning the Super Bowl or claiming Olympic gold.   Like many others, I spent several years trying before earning my first set of stripes.  When I did, the feeling exceeded both the hype and the anticipation.

Back in the early 2000s, we still fished with somewhat antiquated gear.  Lever-drag trolling reels and quality braided lines really did not appear on the beach back then.  We were just entering a point of transition in the sport, with game-changing advances in technology looming on the horizon.  I adapted well to those changes and caught my first tiger sixteen years ago, several years after I started regularly and seriously fishing for sharks in the surf.  Since then, I've landed about twenty-five more of the memorable brutes, and put clients on an additional fifteen or so.

Big tigers are often abundant in the surf this time of year, mostly because of the availability of a favorite food source.  The hungry hunters venture into the surf during late-summer to feed on stingrays, which are there giving birth to their young.  Both giant southern and roughtail stingrays roam the shallows during the day, feeding on crabs and shrimp while preparing to give birth to as many as a dozen hand-sized babies.  When darkness falls, the tigers go on the prowl to ambush the rays.

All this coincides with a reduction in numbers of smaller sharks in our surf.  With shrimp season peaking, many of the other species venture offshore to take easy meals behind culling shrimp boats.  For these reasons, anglers who bait strong hooks with large chunks of stingray can expect to have their best chance of getting a tiger to bite during the months of August and September.

While tiger sharks are most numerous in the surf in the latter parts of the summer, they can be caught in most any month.  I've caught them as early as March and tagged one as late as December.  As the calendar marches into autumn, the appetites of these creatures tends to change.  The first major cold fronts get another of the tigers' favorite prey moving—the jack crevalle.  In November, when the army of jacks storms the beach, we often see another run of tigers on their tails, sometimes including our largest sharks of the year.

Jackfish have long been a favorite bait for anglers who fish the beach.  In the past, most who used jacks to attract the attention of sharks rigged them on stout J-hooks, which are now banned for shark fishing.  Two years ago, TPWD passed a regulation that requires the use of non-offset, non-stainless circle hooks for shark fishing.  Rigging methods have quickly evolved, and anglers now generally prefer using cut chunks of the jacks, which stay on the circle hooks much better than whole fish.

Fishing for tigers in the surf started off somewhat slow this year.  It's not uncommon to see one or two landed before the end of May, with more in June.  This year, during that time frame, we experienced two episodes of heavy rains, producing twelve and seventeen inches in succession, which sent lots of cold freshwater flowing into the Gulf, up and down the beach.  Over time, the dirty, cooler water mixes in completely with the salt, but while the water stays brown, tigers tend to avoid the shallows in the first few guts.  Tigers love warm, clear water, and we didn't have much of that in the surf at the end of spring.

When conditions returned to normal early in the summer, and the water finally cleared, the tiger catching action improved accordingly.  In a short amount of time I managed to put seven tigers on the beach, establishing a new personal record when four of these came on a single charter!  My clients are always happy as clams when big sharks hit the beach.  Late at night, when the tantalizing slow clicking drags start to steadily roll, we feel a kind of excitement like nothing else in fishing; they're the moments we dream of and live for.

I've become increasingly efficient in the shark game and have been fortunate to tangle with my share of tigers.  These days, I do my best to help other anglers earn their first set of stripes during my charters.  While we're at the tail end of summer, I highly recommend contacting me to set up a trip in November.  With the right kind of weather, it's my favorite time of year to head out onto the Texas beaches.  With any luck, it's also a perfect time to experience the power and beauty of the mighty tiger.