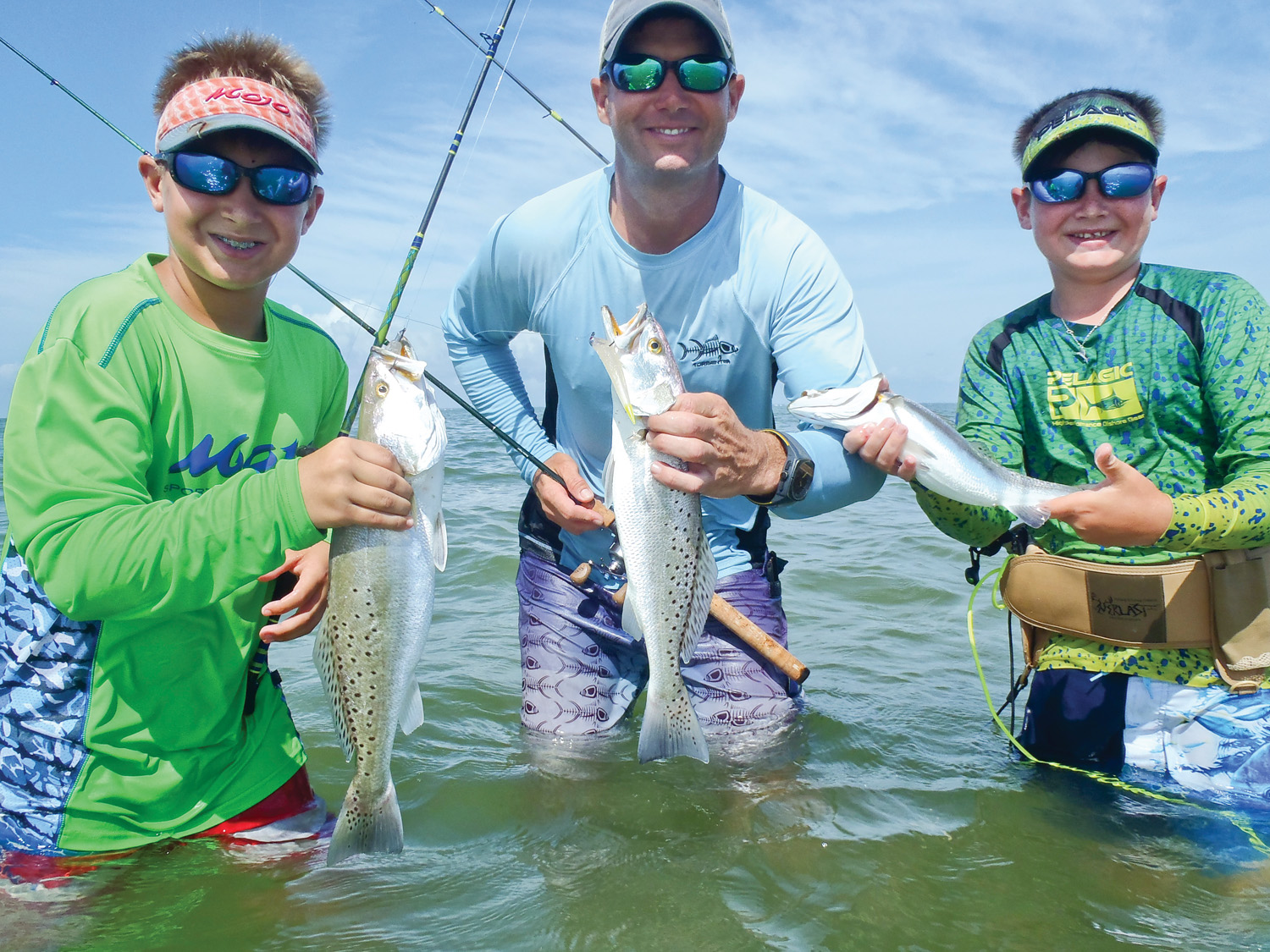 Lots of people ask at what age did I begin to seriously teach my sons to fish. Seems this guiding-teaching-coaching is becoming a “thing” recently due to the number of folks interested in having their children or grandchildren receive professional instruction.

I cannot answer precisely but I’d say at about the age of six. Ryan probably younger than Jay Ray, given that youngsters mimic older siblings. I took them when they were younger but it was just going fishing, nothing specific or detail related. There is a huge difference.

My boys had few choices when it came to activities outside of youth sports, fishing and hunting. There were no x-boxes, cell phones or social media in our house, and not much available anywhere else at that time. My boys spent the day outside, chasing lizards and running barefoot around the edges of the lake we lived on. Only about 20 acres and shallow, but full of all sorts of critters that spark the interest of youngsters, plus some pretty nice black bass.

When it came to fishing they didn’t have much choice, I suppose. They went with me when babysitters weren’t available and, of course, on my days off. They fished in the lake when I was working. It was time well spent for my boys, enjoying what I loved and growing up loving it as well.

I realize that parents have to work longer and harder nowadays. It is natural then that we want what little time we have with them afield to be memorable. I try to explain to younger parents that simply dedicating time is often reward enough, and that the teaching and learning must be enjoyable if it is to sink in. Beating the younger ones up for too long in the heat or cold can sour them on the experience.

Immediate success in catching is not the only ingredient that builds good fisherman. My boys were no different, short attention spans in the beginning, we did other things when I sensed distraction.

We beachcombed, skipped flat-sided shells, and swam. They got stung by jellyfish and cut their feet on shell and got sunburned. We birdwatched and cruised crab trap lines looking for tripletail. We played with the bait we caught in a cast net or obtained at a bait shop. Yes, my boys started with live bait but eventually graduated to throwing lures.

Honestly, the bait thing was short-lived because they loved casting and competing for distance and accuracy. They do this even today when we have opportunity to fish together. It has been my experience that most boys and girls enjoy casting and reeling more than simply casting and sitting and waiting. Patience is learned right alongside fishing technique and nothing teaches better than time spent on the water.

I am concerned that parents today are afraid to allow their children to fail. Afraid that psychological damage could occur if not rewarded, even when they lose. Losing is part of life. I have lost plenty, but never considered myself a loser. Remember we are talking about fishing here, but it might apply to other things in life as well.

My mom told me once that she asked my dad why he never let me win at a game of horse. “He’ll win when he can,“ was his reply.

I had a young dad on the boat recently and watched with admiration as he allowed his two young boys to fail as we waded. Fail is probably not the right word, but when they got a backlash or line twisted on the rod tip he let them work it out on their own. Several times I wanted to help but he did not want me to, he wanted them to learn by their mistakes. Same thing when a fish was caught, they landed it or tried to land it. If the fish was lost, well, it was lost and we went on.

By days end I could sense their tiring and encouraged them in this way. “Guys it’s the fourth quarter. Let’s push through and end the game on a strong note.” That final wade yielded nearly a dozen fish, several the boys caught were their best of the day.

Hard work seldom goes unrewarded and finishing what we start is always the best approach. Quitting requires no effort and can become habit forming. There were no cell phones in the boy’s hands between wades. I could tell they had been raised with this mindset in all that they have learned in their young lives. I think they are 10 and 12. Just an educated guess, but I’m betting their parents were raised similarly. If we get picked up every time we fail we may never learn to get up. By getting up on our own we learn to walk and then run. What a terrific illustration.

So, back to what age to begin providing your youngster with some serious fishing instruction. I’m thinking 9 to 10 years is a good age, so long as the lessons are kept short. A half-day on the water is perfect. Young anglers should be provided comfortable clothing and sunscreen. Plenty of healthy drinks and snacks. Gatorade, fruit drinks, water, and trail mix is perfect.

They need a good pair of sunglasses, for protection and also for seeing color changes and underwater structure. A quality rod and reel is a must. If your budget is tight, spend the majority on the rod and less on the reel. We cannot catch what we do not feel!

Comfortable boat shoes and wading boots, if they will be getting out of the boat. Slip-on water shoes won’t cut it. Long, lightweight wading pants to help prevent jellyfish stings. One good sting can ruin their day and possibly sour them on the whole wade fishing thing. ForEverlastHunting and Fishing products makes great gear for kids at an affordable price. Owner Billy Gerke understands what young anglers need and has a sincere passion for spending quality time with his young boys in the outdoors. Really fine people, the Gerkes.

I did not wait for fishing trips to teach my boys to cast. We used old MirrOlures without hooks in the backyard, away from power lines and oak trees. I purposely did not fill their reelscompletely – half full cuts down on backlashing and, in turn, made it easier to get them out. My boys learned with bait casting gear but spinning is also good and probably a little easier. Without the ability to cast and cast well, all else is meaningless.

Once the youngster is casting effectively we can move on to baiting hooks or threading lures onto jigheads. Imparting specific action to the lure comes next, then setting the hook, and landing the fish. Take it slow. Do not make a big deal of losing a fish. I always tell them, “You’re doing a whole lot of things right when you get a fish on the line.” Positive reinforcement is huge. Working on what is not being done properly is much easier when the student knows a positive reaction is coming from things done right.

I have used the same teaching methods throughout my career and always strive to make the learning fun and not too complicated. No reason to burden young anglers with tons of gear, this comes later and only to those that feel the need for a bunch of stuff dangling from their waist and shoulders.

I am a minimalist. A small wading belt with a single attachment for my pliers, stringer and Boga Grip. All are neatly attached to my right side at hip level. I teach this as well to young anglers, knowing that too much stuff often leads to a mess when things get exciting. To me; less is more.

Teaching the older and, now it seems the younger, has suddenly become very important to me. It has always been important to me as a dad, wanting to leave my boys with knowledge of the sport I have loved so long. As a guide I want to leave anglers young and old with a passion for fishing. What could be better than passing along methods that allow one to become a better angler?

For the record, I am no expert on raising children. I have made more mistakes than I care to remember. Learning to fish well gave Jay Ray a career in guiding and College Bass Fishing provided an avenue for Ryan to earn his Bachelor of Science degree at Stephen F. Austin. Ryan and partner Andrew Upshaw won the 2013 B.A.S.S. College National Championship.

Fishing saved me and the boys during one of life’s most difficult times, a time when we found ourselves on our own. Fishing allowed me to have my boy’s attention throughout their young lives when lots of other things were bidding for it. Spending time teaching them to fish and fish well has paid huge dividends for them and me. I now look forward to teaching my three grandchildren all that I can about the sport. Fishing has blessed me more than anyone could ever imagine.

May your fishing always be catching.-Guide Jay Watkins