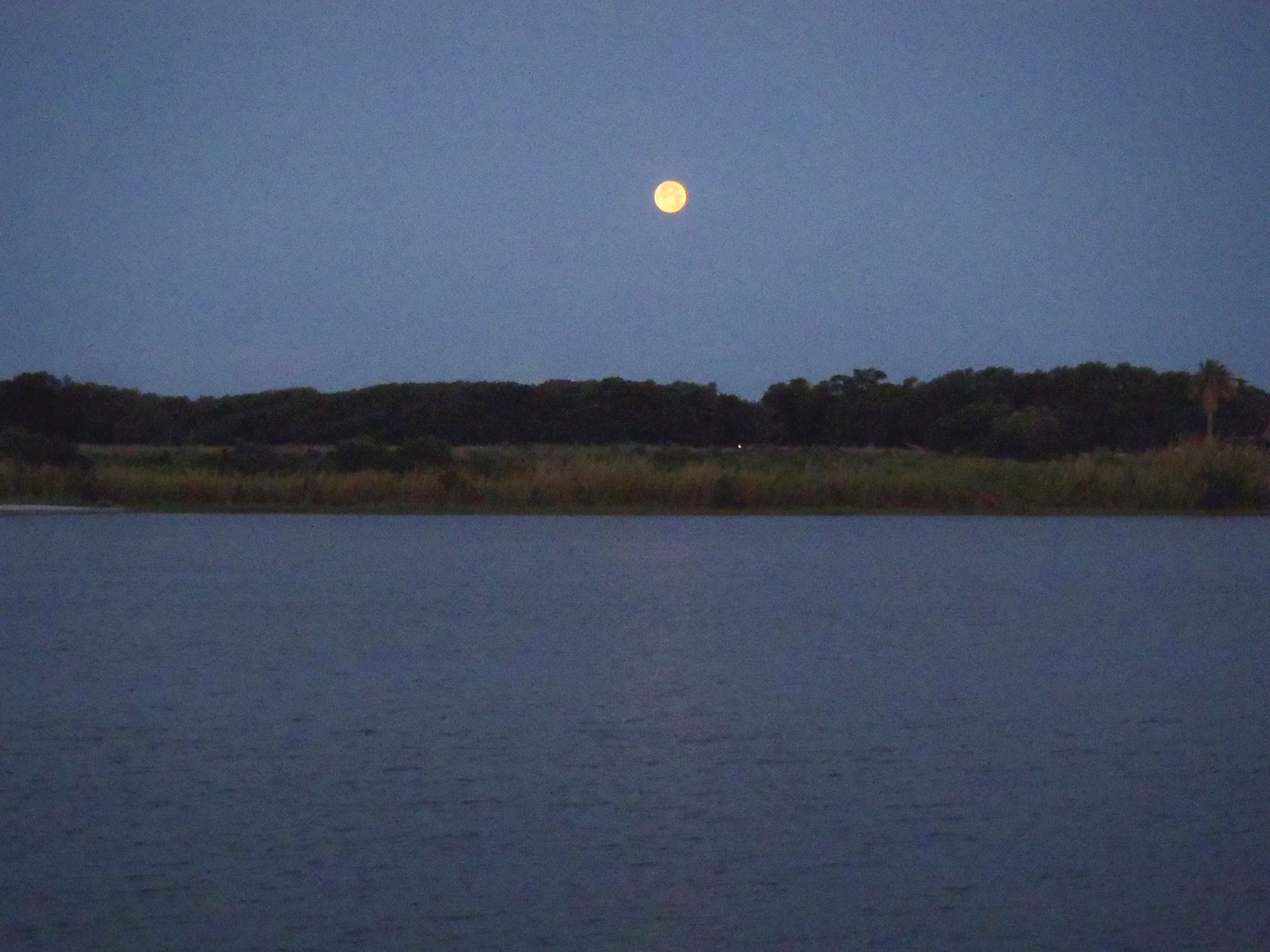 Talk about a setup – moonset minor going off over shallow, grassy shoreline.

I am of the opinion that during the hottest months of the year, larger trout and redfish feed mostly at night, in shallow water. New moon or full moon – doesn’t matter. Shallow water cools more rapidly than deep water and, with plenty bait available, the shallows have to be more inviting. This sounds logical, given that daytime water temps often rise to 90⁰ and higher.

I don’t fish at night but the flounder guides say they see lots of trout and redfish in their lights. Sometimes, I’m told, redfish are so thick they muddy the water to the point that they cannot see the flounder. So, we know they go shallow at night. Whether to cool off, eat, or seek relief from boat traffic – they go shallow. It also makes sense that some of them will still be shallow come daybreak.

People say I think like a fish but that is not possible; fish don’t have the ability to think. React is probably a better term. Fish react to everything that happens around them and some reactions no doubt arise from survival instinct.

A dolphin slaps the water along a shallow grassy shoreline and trout run to heavy grass and bury up. I tell people that I react to what I believe the fish’s reactions might be. It’s not a perfect science but it seems to work. Now, let’s talk about something that is going on in my home waters around Rockport that I think you’ll find interesting.

It is no secret that trout fishing in Aransas and San Antonio bays is better today than it has been in many years – maybe twenty years. Taking advantage of this, my clients and I now target trout very differently than we did in the past. Yes, I still have the “let’s go get our limit” groups, which I have zero problem with, now that the limit is five. I too like fresh fish for dinner once in a while.

Most of my clients nowadays prefer to chase specific age classes of trout and these guys and gals practice catch and release religiously. What a wonderful turn of events for our fishery.

Over the past several years I have noticed a significant increase in the size of the trout we are catching. I attribute much of this to abundant rainfall and fresh water inflow the past two years, and the reopening of Cedar Bayou. Thicker bottom grass, plentiful forage, and more predictable tidal flows play huge roles in the success we are experiencing.

Trout in the 23- to 25-inch class are suddenly not uncommon when targeting them. Smaller numbers of larger fish have also been caught, which is also not uncommon. The most impressive change I am seeing is the increased number of areas that are holding these kinds of fish. In recent weeks I have fished Port Bay, Copano, St. Charles, Aransas, Mesquite and San Antonio bays and landed numerous fish per day over 23-inches. Several 27s and one 28. Equally impressive is that I’m not the only guy enjoying such success. My Fishing Club members keep me informed of their catches and I see the photos.

This might be rather hard to believe but most all of these trout are coming from knee-deep water over solid grass along bay shorelines or in back lakes, when the tide allows me to get back there. Just today we caught five fish between 24 and 26-inches, around the noon hour, in 89⁰ knee-deep water. The third day in a row that we caught trout like this in the same general area.

Hard to believe, but I have some thoughts I want to run by you. First let me state that I am still paying very close attention to the solunar feeding periods, which by now should be a given with all serious fishermen. Second, every area holding these fish has a very stable and predictable forage supply. Third, boat traffic is minimal on weekdays but increases greatly on weekends. Fourth, we see lots of dolphins cruising the nearby breaks and drop-offs.

So, my question is this. Are the dolphins and boat traffic pushing the bigger trout up shallow? As an aside - I have caught more trout this year than I can ever recall, 25-inches and longer, with rake marks (dolphin teeth) down their sides.

I have always believed that left alone, nature finds a way. Are the older and larger trout reacting to the pressure of man and dolphins, leading them to spend so much time up shallow? Boat traffic is greater today than ever and Lord knows we have A LOT of dolphins. Sounds like a good research project for Dr. Greg Stunz and crew at Harte Institute.

Now let’s talk a bit on how we are catching these fish – lures and such. Most know that I’m not a big fan of topwaters. I throw them when the bite is on but that’s about it. I figure that if I have to coax a fish to take a lure or when trying to draw a reaction strike, I can do a better job with soft plastics or suspending plugs.

In the soft plastic category, I basically have three favorites. The 5” Shad Bass Assassin, 5” MirrOlure Provoker, and MirrOlure Lil John XL. All my soft plastics are rattails, believing I can create more of the erratic action that draws instinctive strikes from wary trout and redfish.

The Bass Assassin is the softer of the three, which in itself produces lots of bait movement. When pinfish and piggy perch become troublesome, nipping at the lures, the Provoker’s tougher texture holds up longer. I hope my honesty is appreciated by both of these fine manufacturers.

I mentioned erratic lure action and I watch baitfish very carefully. The pinfish and piggies are plentiful right now and highly visible in the clear water we’re fishing. What I see often is one of these guys coming out of thick grass for a second or two and then quickly darting back into the cover. Their darting creates a quick, colorful flash of color for a fraction of a second. Imitating this erratic darting with a rattail bait seems to draw the most strikes.

In clear water, I typically want a clear-bodied bait with either silver or gold glitter. Gold glitter is not as popular yet, but highly effective none-the-less. To me, a little glitter is all you need. I’m picky and do not believe more is better in this situation.

In recent days I have had tremendous luck with the watermelon-red glitter 5” Provoker and Lil John XL. Tougher and longer lasting is key when fishing over heavy grass with an abundance of tail-nipping baitfish. Red glitter really jumps out in clear water over green to brownish bottom grass. I believe the nanosecond glint of that glitter is what they are seeing and striking. The green body of the lure itself becomes almost invisible, the same as a live baitfish disappearing in grass.

Fish in shallow, clear water definitely know when we enter their territory, so any advantage we can gain will be rewarded with more strikes. Casting distance is definitely one of my keys to success. With the 13 Fishing Concept TX, 1/16-ounce 2/0 plain lead-colored Bass Assassins Screw-Loc jighead and the MirrOlure Lil John XL, you’re there!

It’s an exciting time when we are seeing such good fish appearing in late-summer. Can you imagine what it will be like when the first cold fronts arrive?

May your fishing always be catching.-Guide Jay Watkins