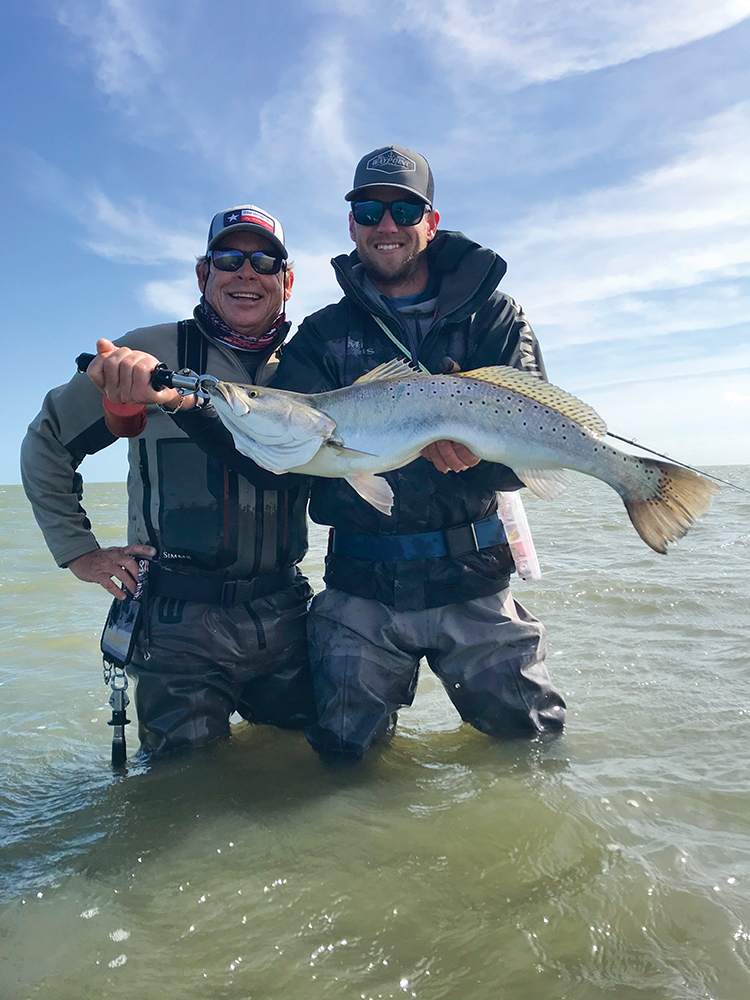 As winter gives way to spring, savvy anglers begin to contemplate frequent weather changes and how they will relate to fishing patterns. Warming air and water temperatures kickstart the migration of bait species back into our bays from the gulf. If you had opportunity to fish the Lower Laguna Madre during January and February, you are probably aware how few truly cold days we experienced. I actually had a group that fished without waders in January.

Despite the unseasonably warm temperatures, the majority of the forage species will remain in the gulf and deeper bay waters until the bay water temperatures reach more comfortable levels. Nature knows and seldom makes a move too early. It is also true that some of the bait populations remain in the bays year round, just another way Mother Nature covers all her bases.

March and April can be described with one word – WIND! I have often said that wind can be our friend, but there can also be too much of a good thing. Here in Rockport, daily sustained SE winds of 20+ mph are not uncommon. Wind can be even stronger prior to the approach of late-season frontal systems. Developing strategies to deal with them is critical to our success.

The older I get and the more fishing pressure we see, the more I realize how important the brain game is. Part of my personal brain game is learning to view wind as a positive. It stacks bait along windward shorelines, that in turn attracts gamefish. To take advantage of bait concentrations, I look for tight guts that lie parallel to windward shorelines that provide ambush points for predators. Many times these guts have scattered grass in the deepest parts and along the edges of the adjacent bars. This is money when you find it and definitely deserves your attention.

The same can be said for a series of guts that lie perpendicular to a shoreline. In most instances these are formed over years of tidal movement and/or ship and barge traffic. The large wakes of passing ships and barges also create what I call manmade tides that are capable of sparking brief feeding periods and therefore very worthy of your attention when they occur in the area you are fishing.

Small submerged points, extensions of larger points that jut from shorelines, are also a favorite target when strong SE winds force water to flow over and around them. Each point can hold one or two of the shoreline’s best residents. For the record, I am not a fan of throwing large, noisy surface lures in such areas but strong springtime wind muffles the clack and clatter and can sometimes be very effective.

I also look to barrier island shorelines and the accompanying parallel guts when the wind is blowing along the shoreline, not perpendicular to it. These guts are typically at least a foot deeper than the sandbars that separate them. We sometimes see a series of five or six such guts, each successively deeper as distance from shore increases. This type of bottom contour provides travel corridors for bait and predator alike. The increased depth within the gut provides a sense of security to both populations. Remember that predation comes from above as well as below the surface for all fish, so many times they congregate in slightly deeper and darker water that is in close proximity to shallow feeding areas. We also know that wind stirs bottom sediments that add “color” to otherwise clear water, which in turn increases our chances of tricking gamefish.

I also target areas where remnants of last summer’s grassbeds have survived the winter’s cold and voracious wintering waterfowl. Submerged grass is structure, structure needed to attract and hold both bait and predator. Blending into the bottom contour is an instinctive behavior and is essential to locating fish. I am always amazed at how many anglers fail to pay attention to the types of structure available in the area being fished. I‘ll quickly turn to shallow shell points and grassbeds surrounded by deeper guts formed by erosion, especially when the tide is moving. Moving water is the key to these areas and even though the wind definitely moves the water, there is no substitute for a moon-driven event.

Reef chains that separate major bays include many deeper guts and channels carved by tidal currents. I am definitely a fan and have written in past articles of fishing these features during periods of water movement. Once fish are located in such areas it is imperative to hold your ground and not push forward and spook the bite. Areas such as these will continue to reload – meaning that fish will move and down the gut and eventually come within angler’s reach – so long as the angler will fish patiently and allow it to happen.

Marsh drains can also be productive places to target on windy days. We frequently see anglers working only the end where the drain meets the bay but over the years I have learned that the opposite end where the drain reaches a back lake can be equally productive. This is especially true during springtime when tides are higher on average and flows between the bays and the lakes is stronger. When Cedar Bayou was open we experienced tremendous fishing in these backwater areas but that is a sore subject at present and I’ll just leave it at that.

Another great game plan for windy spring days is available on the shallow grass flats south of Rockport. These normally air-clear waters become havens for small baitfish during the spring. Flooded mangrove islands and areas of grassbeds with potholes hold truly large numbers of trout, reds, black drum and occasional flounder. SE to ESE wind is definitely your friend when applying this strategy to your fishing game plan. In the spring of 2019 Jay Ray and I made a living in the flats of Estes and Redfish Bay when many opted to stay at home. Our key to success was locating areas of sandy to dirty water in the flats and putting our guys out in these areas and then crabbing our way across the flat, giving the fish every opportunity to see or locate our lures. Texas Custom’s Double D Series proved to be deadly over the shallow scattered grass and sometimes shell bottom.

Finally, there are the mid-bay reefs that get little to no pressure during early spring. On those rare occasions when winds suddenly stop, we can jump out on the big water and work deeper shell reefs that have had almost zero pressure since fall. I seldom catch truly large trout on these mid-bay structures but three- to four-pound fish sometimes show and make for a tremendous day for those lucky enough to be there during this small and unpredictable period.

So, what lures are we throwing during springtime? During periods of cooler water temperatures, and even pre-frontal conditions, I will still throw Custom Corkys and Custom Soft-Dines when looking to attract fewer but larger trout bites. Our water stays really clear even with strong SE winds so clear-water color patterns such as Pistachio, Bay Mistress, Pure Silver/Black, Spots, and Pearl Harbor are go-to numbers in the suspending and slow-sinking categories. Texas Custom’s Double Ds have totally proven themselves in my book. Yes, my name is on the bait, but for the record I was against that part of the deal. Fishing the Double Ds; I bang it down to about 14-15 inches with erratic rod tip action and then allow it to stop and suspend. At this point you need to be holding on because this is when the strikes typically occur.

And, of course, I am big fan of soft plastics and there are lots of fine products on the market today. I prefer the MirrOlure Lil John XL and 5-inch Provokers along with the tried and true 5-inch Bass Assassins. One can never go wrong in our waters with Plum, Cajun Croaker, Watermelon-Red Glitter, Geaux Gleaux, Opening Night, and Roach. I rig these lures on Texas Custom’s 1/16 or 1/8 2/0 Screw-Loc jigheads. I really love the custom painted watermelon-red and black-gold heads but I also carry chartreuse and pure silver in my wade box.

Don’t fight the wind this spring, learn to let it help you catch more fish. Think positive and react to the day’s conditions. The fun is in the game we play with the fish, the challenge they present, and the reward we gain from tricking them. As always, keep a few if you need them and release the rest.